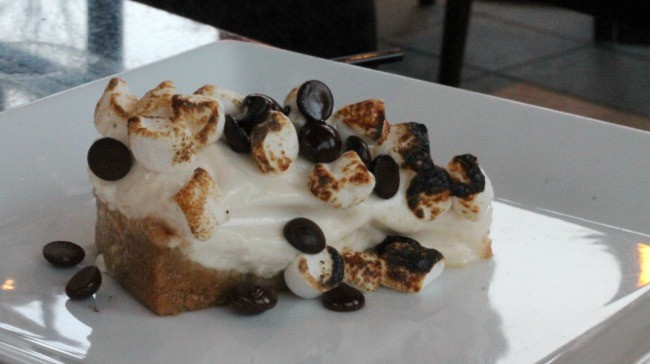 There is a misconception in the world that vegans eat nothing but salad and tofu. There is, in fact, a movement afoot to prove exactly the opposite of that–that vegan food can be just as indulgent and decadent as non-vegan food.

Almost anything you can think of can be vegan-ized, and tasty to boot. Newly-opened Virtuous Pie and MeeT  are two local restaurants that are serving up Vegan comfort food: pizza, ice cream, burgers, fries… it’s tasty, satisfying, and plant-based.

While Whistler may not be a huge town, it does boast some incredible restaurants, and many of them happily serve up plant-based choices on their menus. Chef Wolfgang Sterr, for example, the Executive Chef for Whistler/Blackcomb, is a vegetarian, and vegan and vegetarian choices, including Gardein and Daiya products, are used in their kitchens.

November 1 was World Vegan Day,  and the perfect date to kick off Whistler’s Vegan Devilishly Decadent Dessert Challenge. Nine local businesses shared one goal: to create the ultimate decadent dessert, using no dairy, milk, eggs or honey. Locals were able to try as many of the desserts as they could, and then vote for their favourites.

I recently went up to Whistler to sample as many of the desserts as I could. I’ll list the winners at the end. 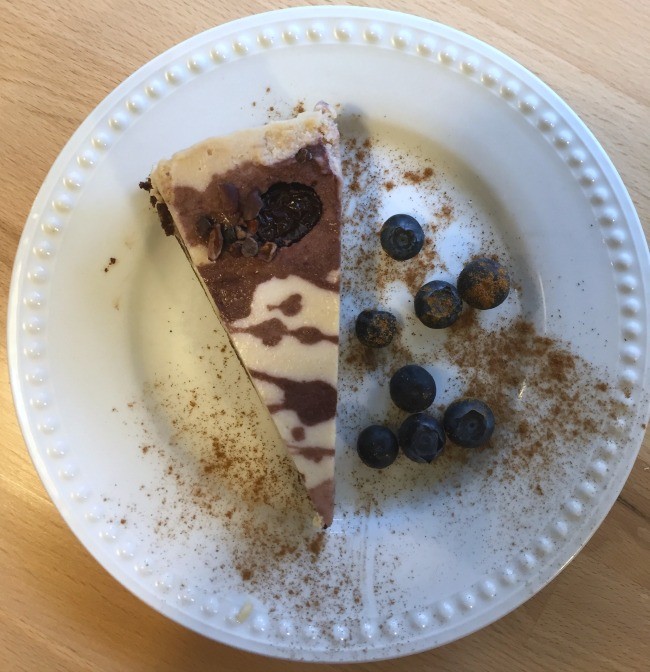 Whistler now has a couple of vegan/raw smoothie and juice bars. This particular dessert is a collaboration with Solfeggio Foods, who also do the menu at the cafe at the Scandinave Spa. This raw cheesecake was super creamy and smooth, studded with Okanagan cherries.

My version of it didn’t actually come in a jar, but that was okay by me. It was still quite tasty. The cheesecake had that nice acidic bite to it, and the graham cracker crust was also gluten free. The chef here used Dandies marshmallows, as regular marshmallows is another ingredient that is most definitely not vegan. 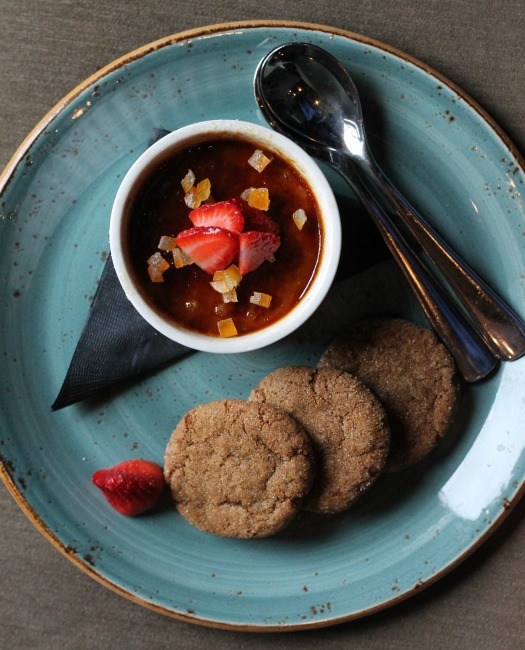 Creme Brulees are probably my favourite thing in the world, and making them vegan is a real challenge. The major ingredients are cream, eggs,a and sugar! This one was nicely spiced, and the chewy texture of the accompanying gingersnaps was perfection. 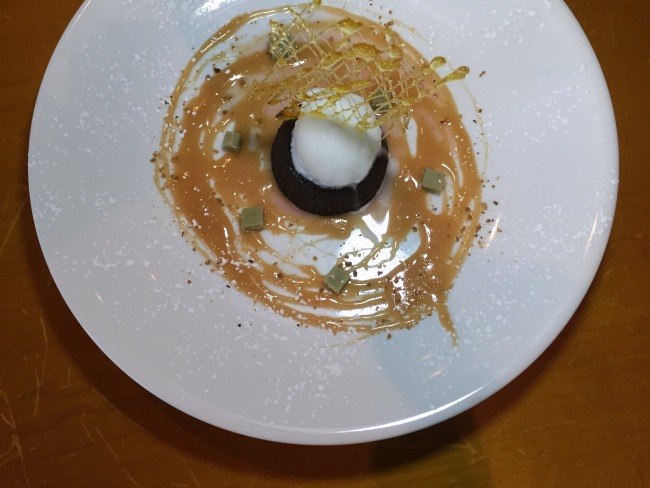 Served with Coconut Ice Cream and Matcha Green Tea Fudge, this dessert was a thing of beauty! Cutting into it was very satisfying; your spoon was rewarded with an oooze of molten chocolate. It was very good, but I found overall that the dish was too sweet, and the ice cream was a little grainy. 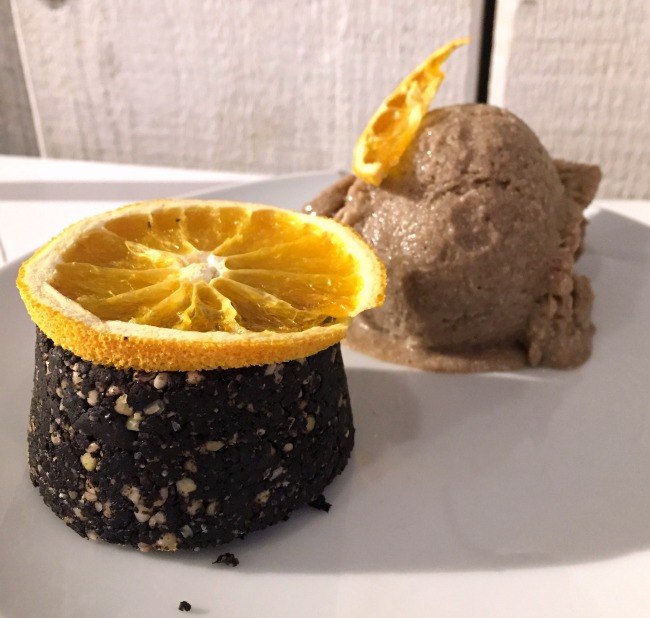 The Green Moustache is another of Whistler’s smoothie/juice bars. It’s very cute, and has communal seating. The morning we were there it was packed, with a lineup out the door. I loved the orange in this cake, but it wasn’t as molten as the one at Cinnamon Bear. It also was made with buckwheat groats, which gave it an interesting texture. I liked it, but my companion found it off-putting. The ice cream was good, but I didn’t feel like you could tell it was caramel. 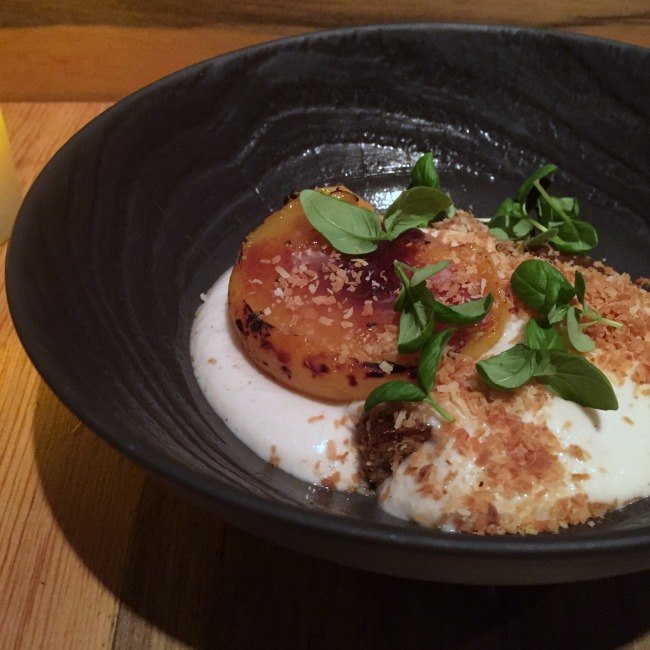 This one was hands-down my favourite. It was the most elevated of all the desserts we tried. The cashew cream was impossibly smooth, and there was a pleasing array of textures. The toasted brioche and the brulee on the peach were crunchy, offset against the smoothness of the cashew cream and the prune puree. I also loved the savoury touch of including the microbasil. This one was the winner to me.

What I didn’t get to taste: 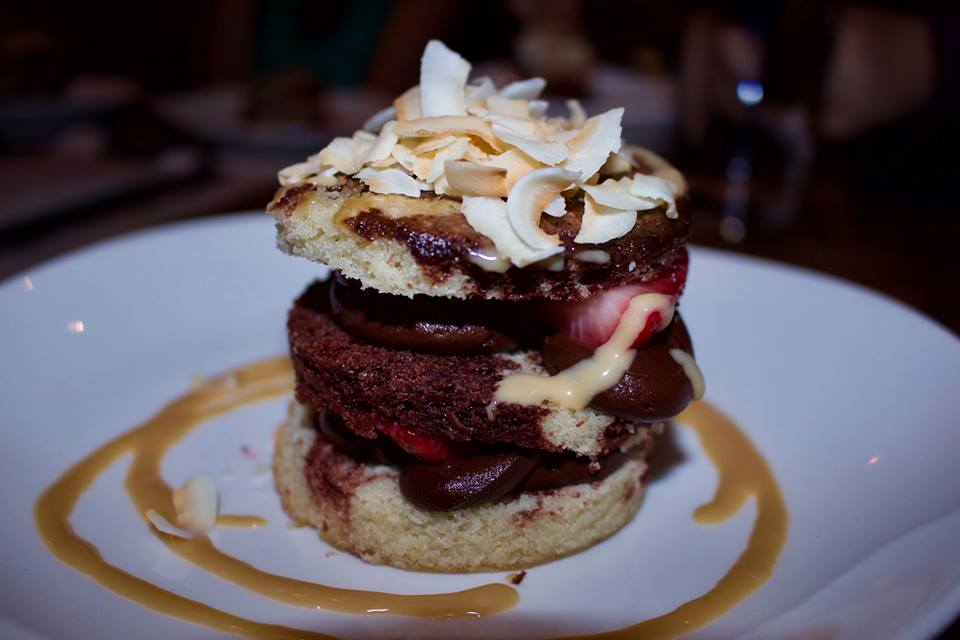 And the winners? For “most decadent,” The Cinnamon Bear Grille, for “most creative,” Alta Bistro, and “best overall”went to Stonesedge Kitchen. Some of the participating restaurants, like Stonesedge Kitchen, have decided to keep the desserts on their menus for a while, so you still have a chance to taste all the vegan deliciousness.