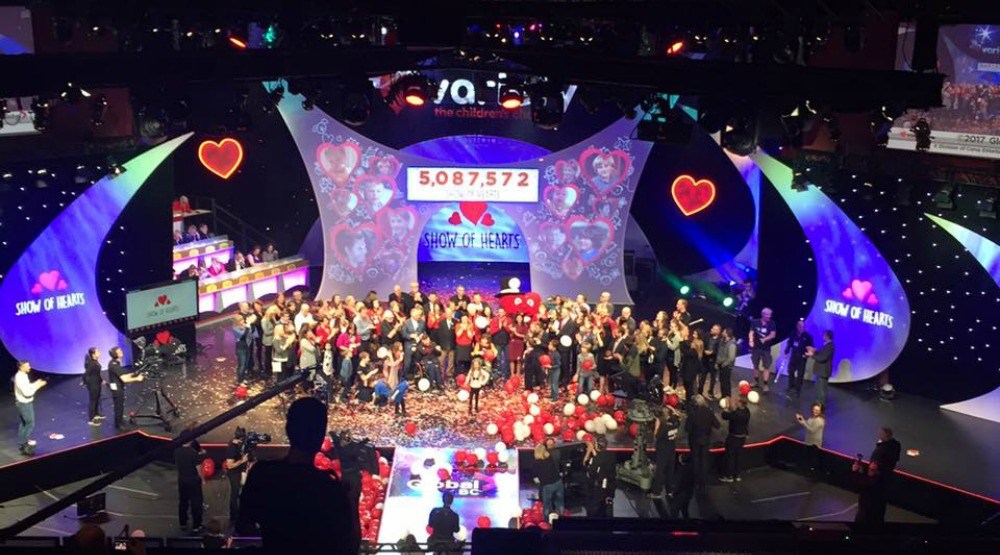 Variety - The Children's Charity of BC/Facebook

The Variety Show of Hearts telethon raised more than $5 million for kids with special needs this year.

This was Variety BC’s 51st telethon – playing on Global BC from the Molson Canadian Theatre at the Hard Rock Casino. The telethon featured performances by Dallas Smith, Dan Mangan, and the Washboard Union.

“It was exciting, it was moving, it was humbling – the whole day was almost overwhelming,” said Kristy Gill, Variety BC’s CEO.

“I am completely blown away by the generosity of our donors. The funds we raised today are going to help kids in communities across British Columbia to walk, to speak, to learn…I’m so proud of our Variety team, all of our partners, and everyone else who contributed to make this day such as success for kids with special needs and their families.”

Unlike previous years, which showcased the telethon over a weekend, the 2017 Variety Show of Hearts telethon was only one day. But this year also saw the first Variety Week, which featured some of the kids who would be helped by donations to Variety BC.

During the telethon, Variety gave updates on those kids – showing the huge difference it makes for both them and their families.

Variety was able to donate two accessible Sunshine Coaches to the Kamloops Child Development Centre, and a family van to 15-year-old Destiny and her mom Tanya. Destiny has Rhett syndrome, a rare neurological disorder, and this converted van will give her more freedom to access the community.

The telethon featured dozens of cheque presentations from community partners, but the most overwhelming donation was saved for the Illich Family Foundation. The long-time Variety supporters donated $1 million dollars during the telethon, bringing the donation total up to $5,087,572.

If you missed the show, it’s not too late to help. Variety is still accepting donations online, over the phone at 310-KIDS, or by texting KIDS to 45678 to make an automatic $20 donation.