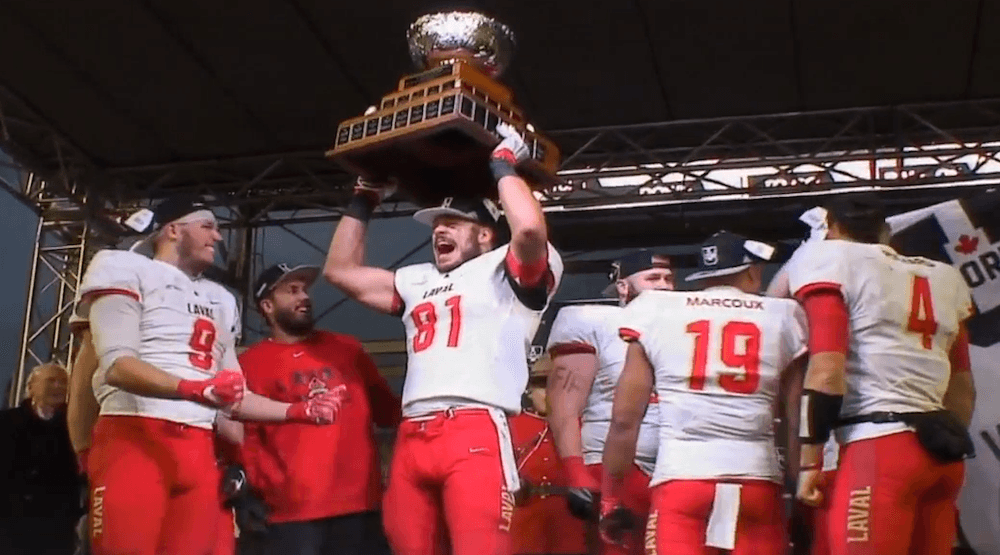 The Laval Rouge et Or are national champions of Canadian university football, beating the University of Calgary Dinos 31-26 to take home the 52nd Vanier Cup on Saturday.

Calgary got off to a dream start in this one. In their first play from scrimmage, QB Jimmy Underdahl completed an 86-yard bomb to Michael Klukas for the opening touchdown of the game.

Laval got one touchdown back with 5:34 left in the first quarter, as Marc-Antoine Pivin caught a 37-yard pass from QB Hugo Richard to make the score 14-7.

In Calgary’s next possession, disaster struck. Underdahl was sacked by Vincent Desjardins, which re-aggravated an injury for the Dinos starting QB. Underdahl was forced out of the game, giving way to Adam Sinagra.

After the teams exchanged field goals, Laval had a great chance to tie the game before the end of half, but a fumble by Nicolas Gobeil inside the Dinos 10-yard line gave the ball back to Calgary. The Dinos led 17-10 at halftime.

Laval began to take charge in the third quarter.

After a Calgary field goal made the score 20-10, Laval nearly completed the most amazing trick play I’ve ever seen.

Laval failed to recover the kick, and it turned out that the receiver wasn’t onside (behind the ball at the time of the kick), but still.

The failed trick play didn’t come back to bite the Rouge et Or, as shortly after Cedric Lussier-Roy forced a fumble and recovered the ball from Sinagra. Laval made them pay, as Richard completed a touchdown pass to Antony Auclair for the TD to pull them within three.

With 21 seconds left in the third quarter, Laval got their first lead of the game. Running back Vincent Alarie-Tardif touchdown capped a 10-play, 89-yard drive with a three-yard touchdown run to make the score 24-20 for Laval.

With Laval marching down the field, Calgary’s Adam Laurensse intercepted Richard with an amazing diving catch at his own 28-yard line with just 5:44 to go.

Things were looking good for Calgary, who had to punt at their own 49-yard line with 4:20 to go.

That’s when Raphael Robidoux-Bouchard turned the game on its head.

Robidoux-Bouchard soared through the air, blocking the punt. Laval recovered the ball and ran it to the 15-yard line. Richard and the Rouge et Or took advantage, with the Laval QB scoring a rushing touchdown shortly later to make the score 31-26. It was a lead Laval wouldn’t relinquish.

Calgary had a late drive to make it interesting, but couldn’t get it done, turning the ball over on downs with eight seconds left.

Laval are the 2016 Vanier Cup champions.