When it comes to political campaigns, experts will tell you that it’s all about getting out the vote—period, full stop. But do conversations happening online through social media now matter more than ever?

I’ve said for quite some time that Gregor Robertson and Vision Vancouver will be really hard to beat. Not only are they the incumbent government, they are also the first municipal party running a full-fledged campaign like the kind we might normally see in USA politics. Vision has powerful voter identification tools and uses tactics like getting people to sign online petitions or ‘birthday cards’ for the mayor to profile them as supporters.

We know that voters are cranky, but social media commentary is not the way to set your compass when it comes to elections. While you cannot afford to ignore what people are saying on these channels, you only have to look at the last B.C. election results to know that you cannot determine elections using a “crankiness index.”

Simply put, Facebook and Twitter didn’t defeat nor did it elect Christy Clark with an even larger majority government.

I’m a fan of social media advertising overall, and believe that it does promote topics and elevate brands through Facebook newsfeeds and Twitter streams where people are spending a lot of time today. But because these ads are “social” in the sense that people can publicly respond to them – and add comments or replies – you get an impression of what the public is feeling in real time. This can be positive, and it can be the opposite. They can backlash on you.

Take note of the election ads now running on Facebook. Vision Vancouver has an “affordable housing” ad, which both attacks the opposition NPA and Kirk LaPointe, and boasts of the governing party’s accomplishments. It might be a good way to promote Robertson and the Vision brand, but the ads might also prompt questions on whether market rents pushing $2,000 per month are affordable, even in Vancouver.

The comments left behind by Facebook users on the Vision ad are universally cranky and negative, possibly because of the ads’ affordability claims. One commenter counsels the Mayor to read the comments, but why bother “he wouldn’t pay attention anyway.” Remember that it is a “social” medium and, for reasons that escape me, people are not at all shy about blasting politicians online. If COPE, the Vancouver Greens or NPA were in power, likely they would be subjected to similar hostility. 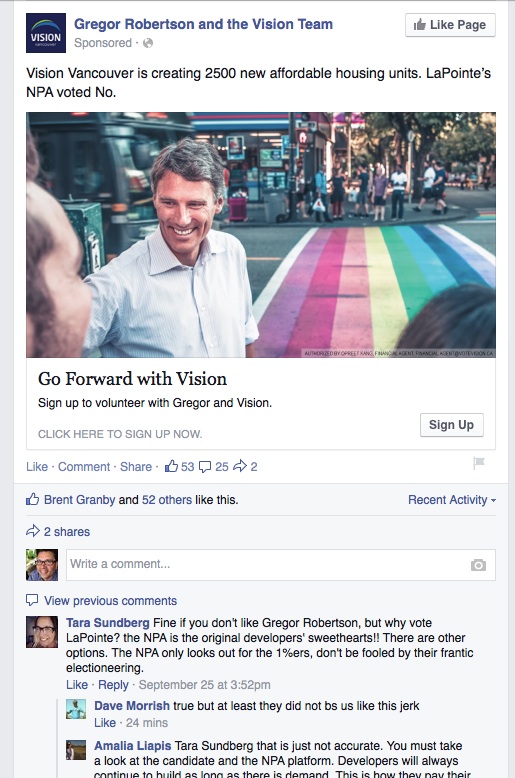 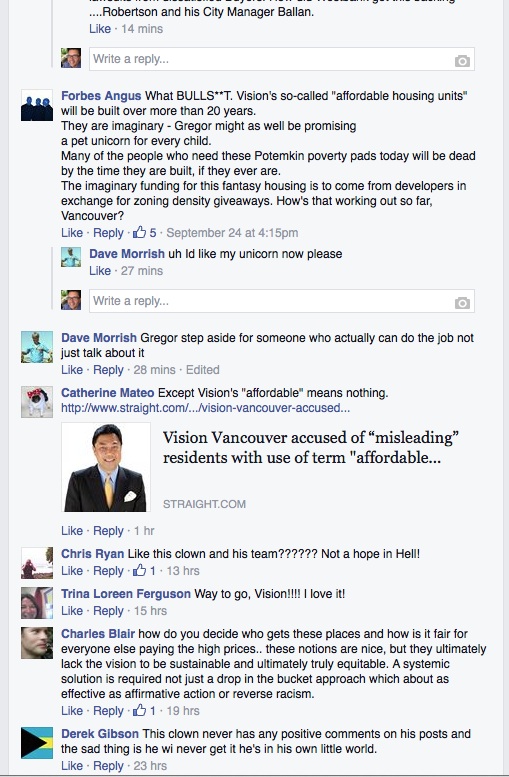 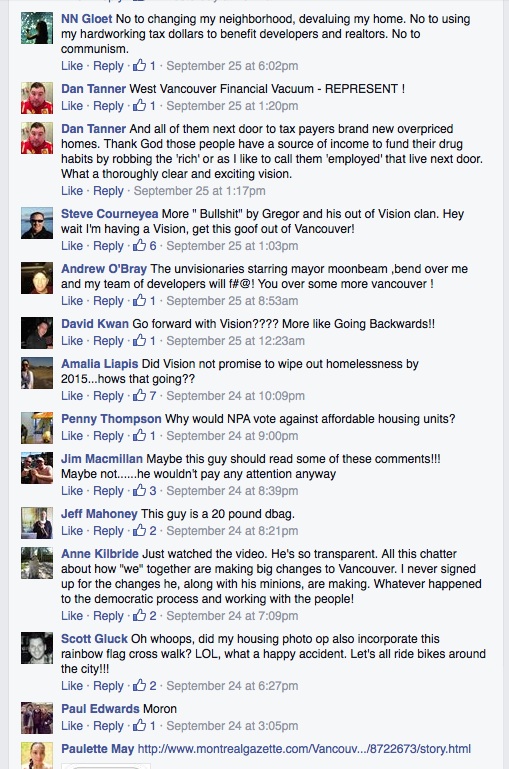 Judging by the reaction Vision’s opponents are getting online, which ranges from loud snores, or the occasional rah-rah from supporters, to skepticism of their own ability to deliver on their promises, they shouldn’t be overly worried about how many “likes” they’re getting, and keep focused on getting votes.

At the end of the day, does it really mean anything? Will Vision’s voters not go to the polls because of the ad gaffes? Is Vancouver ready to throw this government out and elect someone else because of hostile tweets?

Fact. Elections are not won or lost on twitter.But that’s where savvy campaign social media peeps go to plant seeds of discontent #surreybc

We know that pollsters have struggled to really take the temperature of the electorate in recent elections. What we really do not know yet is whether social media can really determine whether politicians popularity, and are a true bellwether of how people will vote. If not today, perhaps in the future it will.

Make sure that you mark your calendar for November 15 and get out and vote.