UFC 148 has a decidedly Pacific Northwest feel to it.  Oregon’s Chael Sonnen is in the main event, competing for the middleweight title against longtime champion Anderson Silva.  Cody McKenzie, who trains out of Spokane, Washington will make his featherweight debut against Chad Mendes, and Vancouver-born John Alessio will take on Shane Roller.

Alessio steps into the UFC Octagon for the fifth time in his storied career to take on Shane Roller.  With four losses to his name in the storied Octagon thus far, he has yet to taste victory in the UFC.  However, this record is a perfect study in the old adage “Looks can be deceiving.”  It’s been a tough journey for Alessio in the UFC.

He first competed for the UFC on June 9th, 2000 at UFC 26 in Iowa for the Welterweight Championship.  His opponent that night was Pat Miletich, at the time one of the best fighters in the world going into the fight.  Had Alessio won, he would not even have been legal age to enjoy a victory drink with his friends.  He was still a month away from celebrating his 21st birthday at the time, and his age at the time (20 years, 339 days) remains one of the youngest recipients of a title shot in the history of the UFC.

It would be six years and twelve more fights before Alessio would find his way to the UFC again, however, ran into roadblocks just as tough as a world champion.  He met Diego Sanchez at UFC 60, who had recently won the Ultimate Fighter, and then Thiago Alves, who was making a habit of knocking everybody out at the time.  Alessio was not victorious in either, however, to his credit, proved how tough he was to finish, as neither man was able to put him away enroute to future title shots.  Alessio was out of the UFC, but not forgotten.

The years accompanying saw Alessio appear on some of the largest stages in the world outside of the UFC.  The WEC, DREAM and Canada’s Maximum Fighting Championship, to name a few.  Starting in 2009, he would also win nine of ten fights, and following a victory over Ryan Healy this past March, he got a phone call.  Matt Wiman was injured, and fellow Canadian Mark Bocek needed an opponent.  Alessio was back in the UFC. 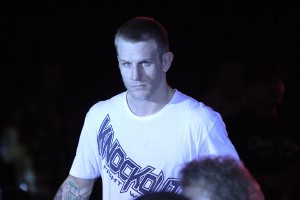 He had recently dropped down to the Lightweight division, and only days earlier had expressed desire to fight the submission specialist Bocek, whom he considered to be the #1 Lightweight in Canada.  His bid for victory came up short, as Bocek would take a decision win.  Bocek was unable, however, to submit Alessio in an attempt to claim a third submission of the night victory, as Alessio’s tenacity powered him through some of Bocek’s best tricks.

All that is in the past now, however.  Alessio has repeatedly said he is looking into the future rather than the past, and his eyes are on his opponent Saturday night: Former WEC standout Shane Roller.  After coming to the UFC as part of the WEC merger, Roller found early success, however, has lost three in a row and could be fighting for his UFC contract.  Alessio has been confident this is his moment to shine, and his striking coach Gil Martinez has been complimenting his progress and growth on a daily basis.  Should Alessio be victorious, it will end a drought totaling 4,441 days from the first time he stepped into the UFC Octagon to when his hand will first be raised, and perhaps cap one of the greatest moments of his storied MMA career.  It should be a great moment for his hometown as well.

While the Pay Per View portion of UFC 148 begins at 7 PM, you can watch Vancouver’s native son in action free of charge.  John Alessio vs. Shane Roller opens the televised preliminary card, which you can check out starting 5 PM on Rogers Sportsnet.