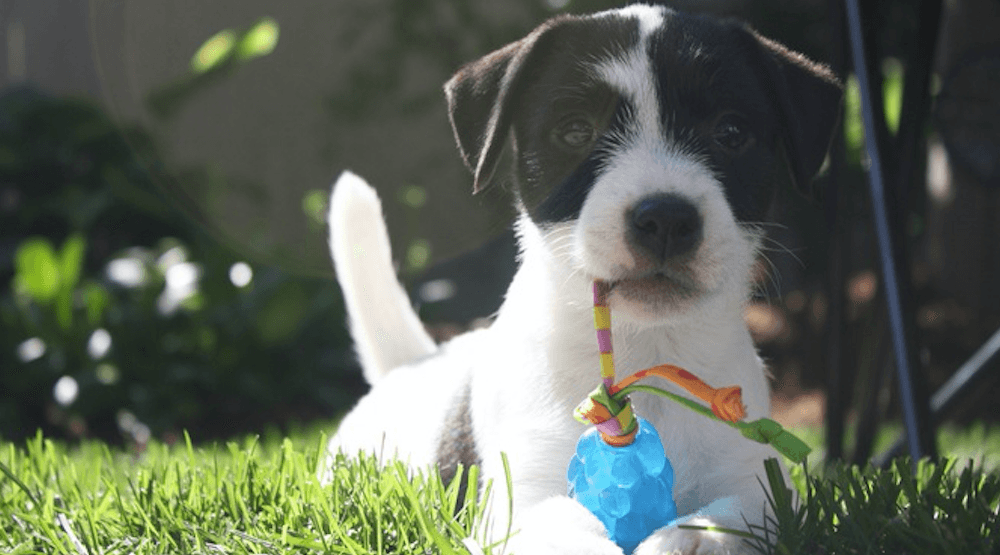 Today is National Puppy Day, and in its honour we are celebrating your puppies – both young and old.

We asked you to send us pics of your adorable pups– and tell us just why they’re so awesome – and you delivered! We had so many submissions, we wish we could have included each and every one.

It was hard to choose, but here’s a rundown of our favourite 26 puppies of Vancouver. 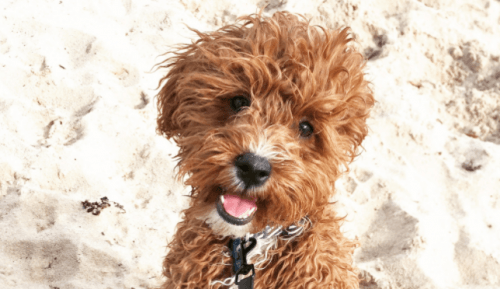 From Bianca: “Not only has little Sonny come on a big adventure with us all the way from Australia, it’s also this adorable pups first birthday today! ” 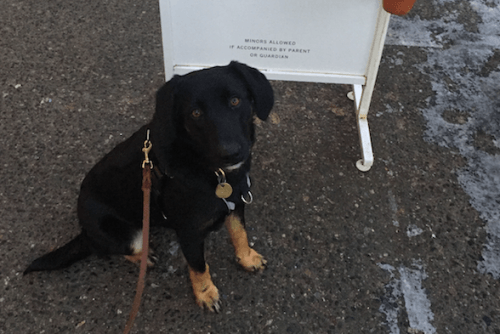 Zola was adopted 3 months ago from Texas (Image: Freda Warner)

From Freda: “We adopted Zola just 3 months ago from Texas! Only a year old, they found her under a house w her pups. She’s now a food-obsessed, cuddly ball of love (who let us know yesterday that she is NOT a jogger!). We’re very happy with our lazy, loving little pupper.” 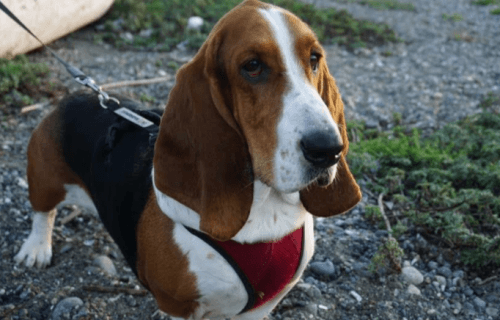 From Jess: “This is our prince, Gus! ‘Little Man Syndrome’ has never looked so good. He is a 65-pound fella, on 3-inch legs, how could you not smile just looking at him? He is the source of so much laughter (also so much stink – but we take the good with the…pungent). Plus, how cute does he look in his sports bra?” 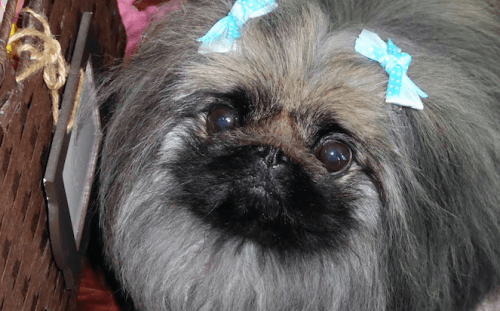 From Jennifer: “My little girl’s name is Sunshine. She is a Pekingese as many people think she is a long haired pug (which does not exist). The great thing about her is that not only she makes my day when I come home from work but I know she makes other people’s day.” 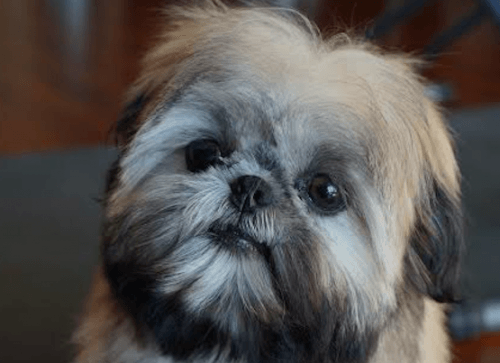 From Sharon and Ivan: “I  am “MoMo”.  Sometimes people call me “MooMoo” but I don’t mind if you get it wrong.  When you give me attention, it is like the sun is shining down on me and it feels wonderful. ” 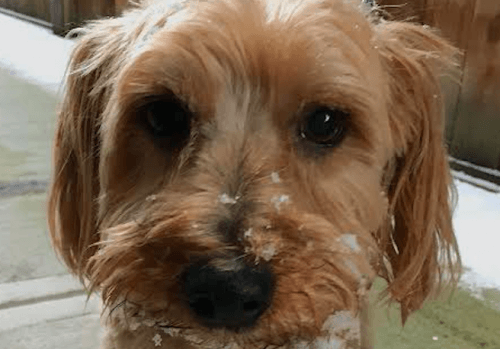 From Sabrina: “My puppy Fudge is cuddly, energetic, affectionate to everyone he meets and one-of-a-kind! He also LOVES the snow, so this winter in Vancouver was his favourite.” 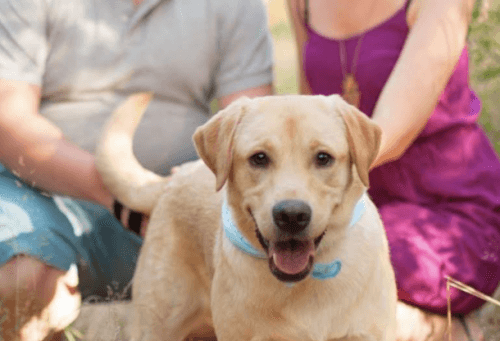 From Samatha: “Reese loves everything about life. His most favourite things in life are breakfast, lunch, dinner and his best fur friend named Dexter. Reese doesn’t bark but clucks like a chicken when he gets really excited. If people could love life as much as Reese does, every day would be as wonderful as National Puppy Day!” 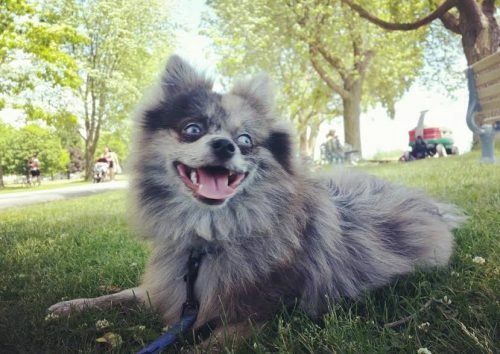 From Ashley: “This is Yeti. And yes, he is a monster! After years of wanting a puppy, my husband and I finally decided it was time when we met this little merle Pomeranian. He’s a true adventurer and travelled with us from Toronto to our new home, exploring New West.” 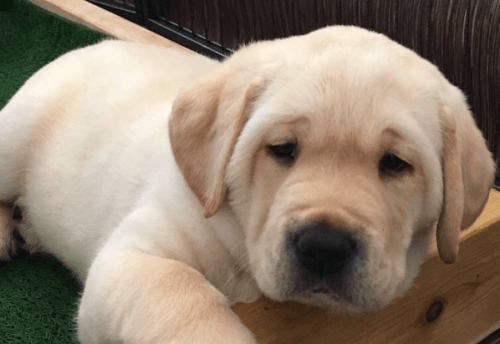 Tako is being trained to be a dog for the disabled (Image: Dian Wang)

From Dian: “I am a volunteer for PADS (pacific aid dog society), a non-profit that breeds and raises puppies to be working dogs for the disabled. Tako is a 3-month-old puppy experiencing Vancouver for the first time as a puppy-in-training.” 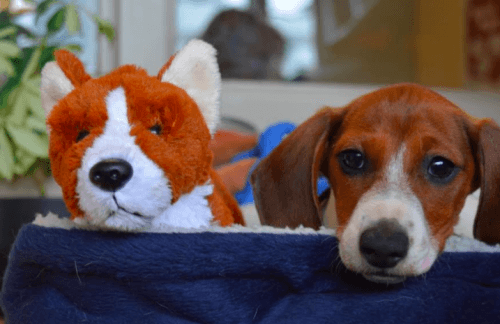 Joan is a good friend to her owners (Image: Christian Baker )

From Christian: “We got Joan last summer to help us cope with having to put down our previous Miniature Dachshund, Phoebe.” 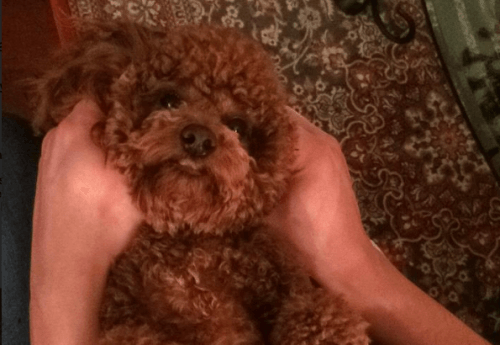 From Kasra: “Hazel is an 18-month-old toy poodle who often gets mistaken for a stuffed animal. She enjoys freshly boiled organic chicken with chopped veggies, running around in the dog park acting like she’s 100lbs and nestling herself into people’s arms and legs for warmth when she takes naps.” 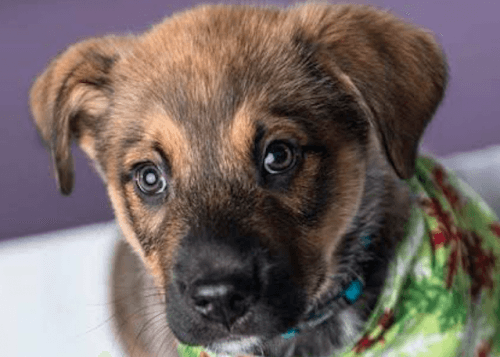 From Alexis: “I want to introduce you to our pup, Hank, a.k.a. Mr. Hanky. We adopted him through L.E.A.S.H. Animal Welfare Society, who found him on a reserve in Manitoba. He’s a shepherd mix and is currently six months old, living it up in West Van. He’s the king of the dog park and everyone who meets him instantly falls in love with him.” 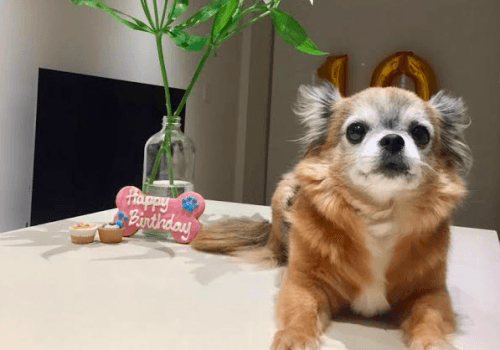 From Valerie: “This is my long-haired chihuahua ‘Naro.’ She just turned 10yrs old a few weeks ago! She was born in Toronto, Waterloo. Moved to Vancouver when she was about 10months old. Her favourite food is baked sweet potato, her hobby is napping and licking her paws, and she gets scared strangers and loud noises.” 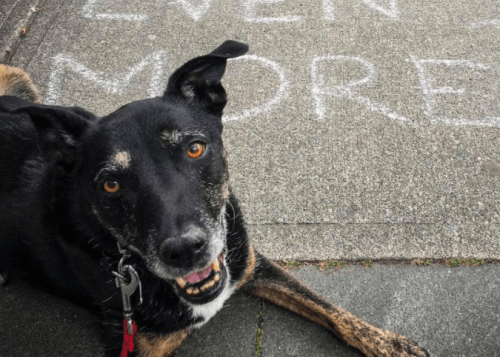 Grace 13-years-old but a puppy at heart (Image: Anna Vasilevski)

From Anna: “As you may notice from the attached photo, Grace is not exactly a puppy. In fact, Grace is a senior canine, at 13 people years of age. She has lost most of the muscle from her back legs, has an ulcer and recently developed pancreatitis (likely from her younger cigar-smoking, scotch-drinking days and the stress of a care-free life of luxury). Don’t let the picture fool you; she also dislikes all dogs and most men, except for the random postman that comes by our house. She loves him. ” 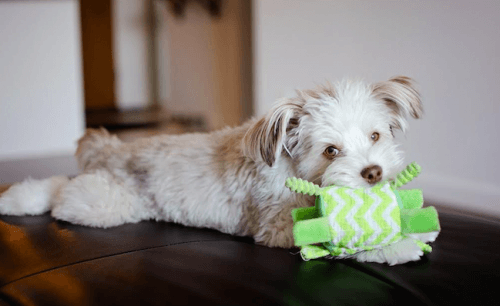 Chewy is a bundle of fluff and joy (Image: Christina)

From Christina: “Hi! My name is Cristina and we have a pup named Chewy! He keeps us happy and busy at the same time! We love our bundle of fluff and joy! ” 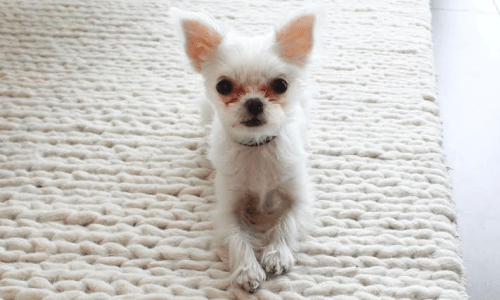 From Crystal: “Jax just turned one year old and is a 2.5lb teacup Maltese cross. His favourite command is dance (spinning in circles) and he loves to give high-5s!” 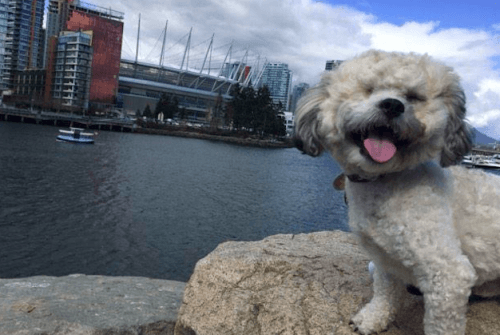 From Kirsty: “Wonton is a one-eyed spicy meatball. We came across his photo after months of searching for a dog after the loss of our 14-year-old poodle and fell in love. He had lost his eye after being hit by a car at a young age, and his previous owners never claimed him from the shelter. Nowadays he’s a goofy little pup with a wiggly butt. He enjoys eating oranges and watching BBC Earth on rainy days.” 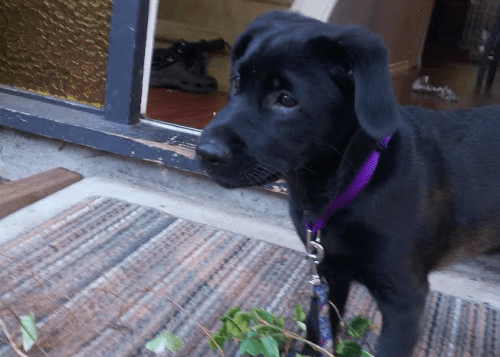 Blackberry is a foster pup from the BC SPCA (Image: Colin Edington)

From Colin: “Blackberry is now 3-and-a half years old. She was a foster pup from the BC SPCA at first but we just couldn’t say goodbye to each other. She likes long walks on the beach and presenting guests with shoes.” 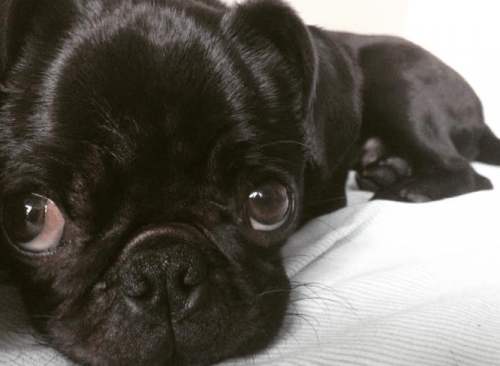 Rasin is a constant source of laughter for his owners (Image: Kathleen Walsh)

From Kathleen: “Raisin is a constant source of joy and laughter. From his quirky personality, dramatic expressions and love of just about everything, he makes life lighter and brighter. With Raisin around the grey, rainy Vancouver days don’t seem quite so dreary.” 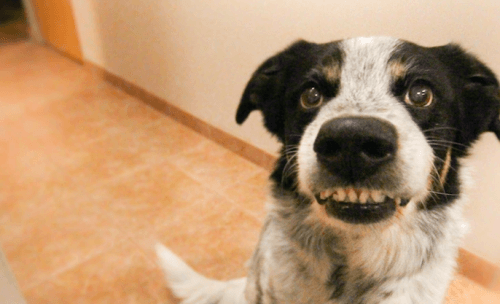 From Cormac: “Tex is a Border Collie/Blue Heeler cross who just celebrated his 13th Birthday on March 20th! Tex is still a ball of energy even into his Senior years. Tex is constantly at the beach hoarding sticks into a pile just to split them up just to gather them all together once again, a classic Collie/Heeler tendency!” 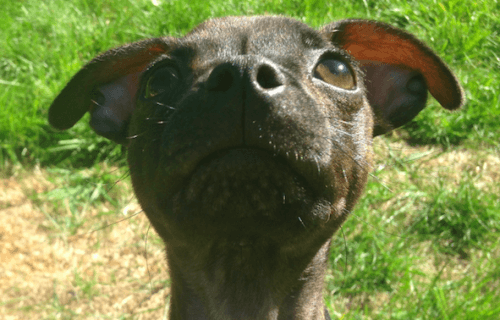 From Maleena: “This is little Marvin, he is a one and a half year old Bospin (Boston terrier/Miniature Pinscher). He is a happy outgoing playful energetic friendly puppy who loves to run and spend time with his family! ” 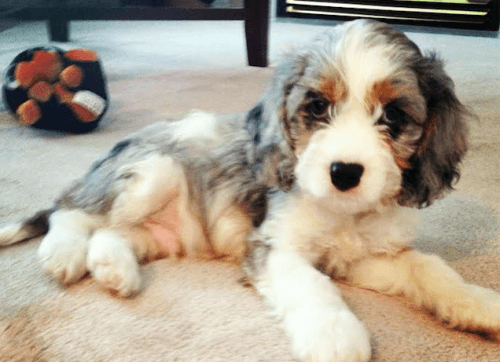 From Erica: “This is my best friend Milo. He goes ball crazy for his favourite orange ball and loves to spend time with his Woofpack! He has brought so much joy and laughter to my life and just has the funniest personality. I don’t know what I would do without him!” 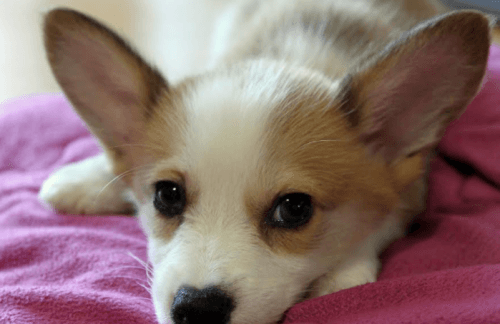 From Teresa: “This is Alfie, my Pembroke Welsh Corgi, when he was a wee little pup! He is 2.5 years old now and still has the same curiosity and energy that he did as a puppy! His interests include swimming just up to his ankles, barking at Huskies, and eating any paper he can find but is still the most loving, funny dog anyone could ask for!” 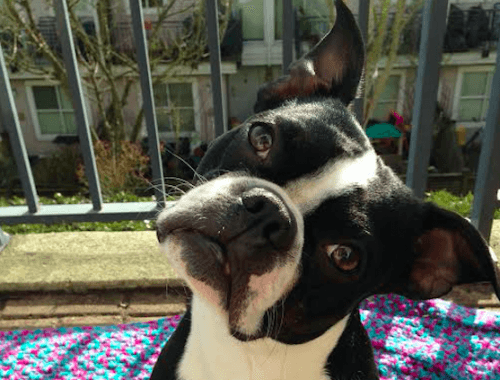 From Melissa:“My name is Melissa and this is my wonderfully energetic 4 year old Boston Terrier named Oskar. He has the funniest personality, and he is the love of our lives. In July our ‘fur baby’ will be a ‘fur brother’ as we are welcoming our first human baby. Oskar is going to make a great big brother to his little human sister.” 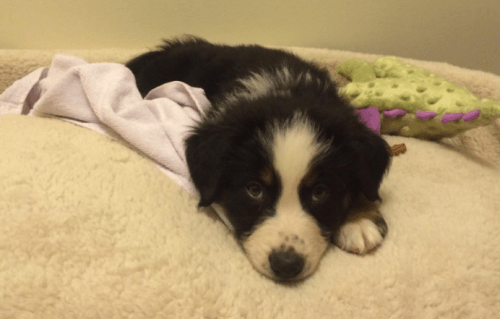 From Kristen: “Bruce likes: long walks on the beach, meeting new friends, and eating things that are non-edible. Bruce dislikes: bananas and the iron.” 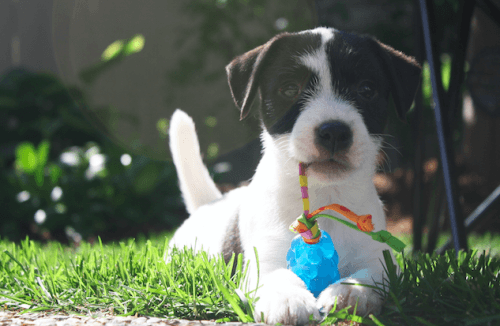 From Hanna: “Blu is a Parson Russell Terrier who loves baths, mischief, and people. Give this girl potato chips and she’ll run away with you forever – or at least until she spots the neighbourhood cat!”