On Saturday July 30th, the Vancouver Whitecaps are to host a home game against the Los Angeles Galaxy. The Whitecaps have sold over 24,000 tickets to this game – most were prior to superstar David Beckham’s suspension (and most of those most were probably women). The former Manchester United beau collected eight yellow cards this season (maybe he found a new hobby?) and will be serving a one game suspension. On top of that, offensive midfielder Landon Donovan could also be a no show to Saturday’s match. The American star soccer player is currently suffering a calf injury and has already been confirmed to miss the Galaxy’s all-star game in New York this coming Wednesday.

I am currently sending virtual hugs to all David Beckham fans that will be attending this game. Whether you like him because of his “skills” or because of his ridiculous good looks – you all get a squeeze. 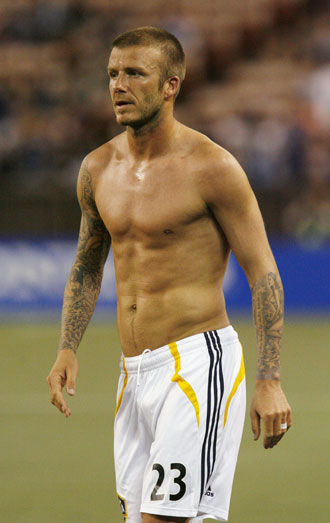 Further into Whitecaps news: All-star (or should I say only-a-little-star) WCFC striker Eric Hassli has been added to the list of “inactive MLS all-stars.” This means he will not be playing for the MLS all-star team that will play England’s Manchester United unless an active all-star player is injured. Sorry Hassli, maybe next time.