Canadians make up the biggest proportion of Ashley Madison users, according to data analyzed by Dadaviz.com.

The visual data site breaks down data scraped off the recent AshleyMadison.com hacker leak which revealed user account information for some 32 million users of the extra-marital affair website. In their findings, Dadaviz breaks down who uses Ashley Madison, where they live, where they work, what type of people they are looking to hook-up with and other fascinating data.

It is not entirely surprising that Canadians make up the biggest proportion of Ashley Madison users at 6.3 per cent of the population, compared to 5.1 per cent in the U.S. and 4.6 per cent in Australia because the company is headquartered in Toronto. That city also tops the list for the number of accounts per city. 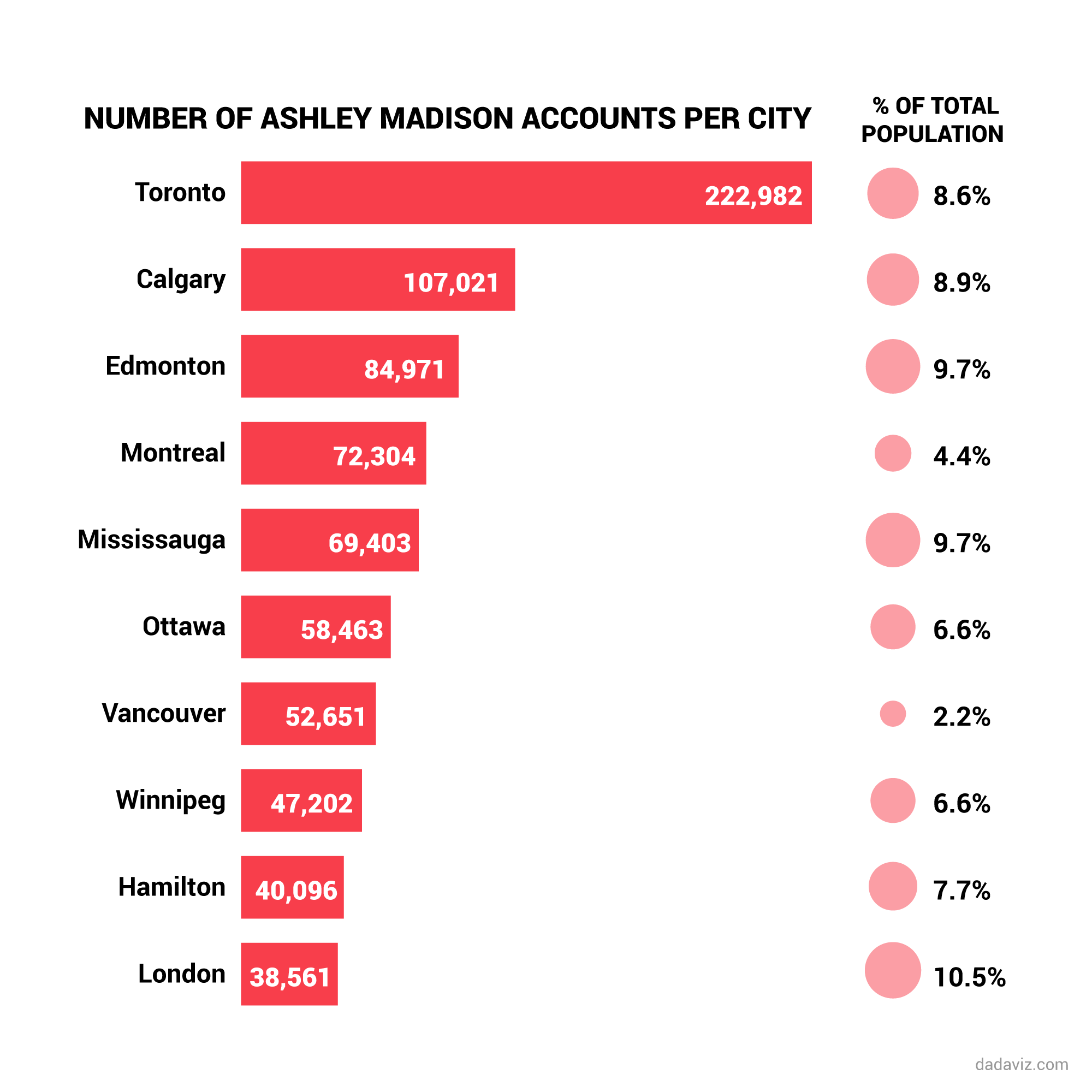 Vancouver is seventh on the list with 2.2 per cent of the population on the site. In terms of per capita use, London, Ontario residents are surprisingly the most prolific users of the site with 10.5 per cent as users.

Last year, Ashley Madison named the top neighbourhoods in Vancouver for cheaters. According to membership per capita, the most affair seekers live in West Vancouver (replacing previous number one spot holder, Kitsilano), with Shaughnessy and Kitsilano rounding out the top three neighbourhoods. MacKenzie Heights, Kerrisdale and Richmond were at the bottom of the list with about 7 per cent of their population on the site.

In the world, Sao Paulo, Brazil has the most cheaters, followed by New York and Sydney. No Asian or South Asian cities made the top 25 cities list, mostly dominated by Latin American, American and Australian cities. 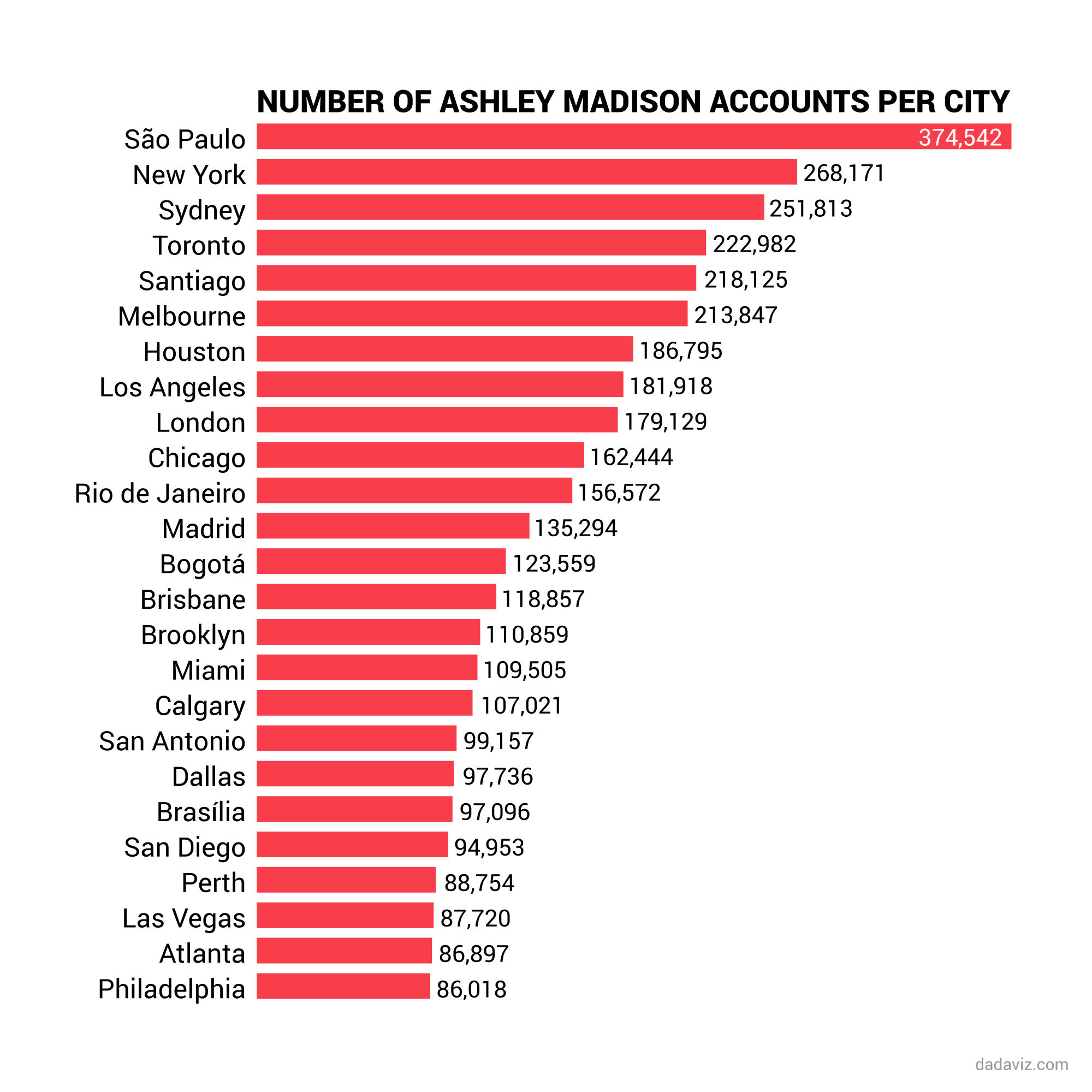 But not all people on the site are there to cheat. A total of 40 per cent of users say they are single while 57 per cent already have a partner. Because emails do not need to be verified to create an account, the data also reveals that about 34 per cent of accounts are fake and lead to an invalid email. However, someone may have joined purposely entering an invalid email to avoid being caught. 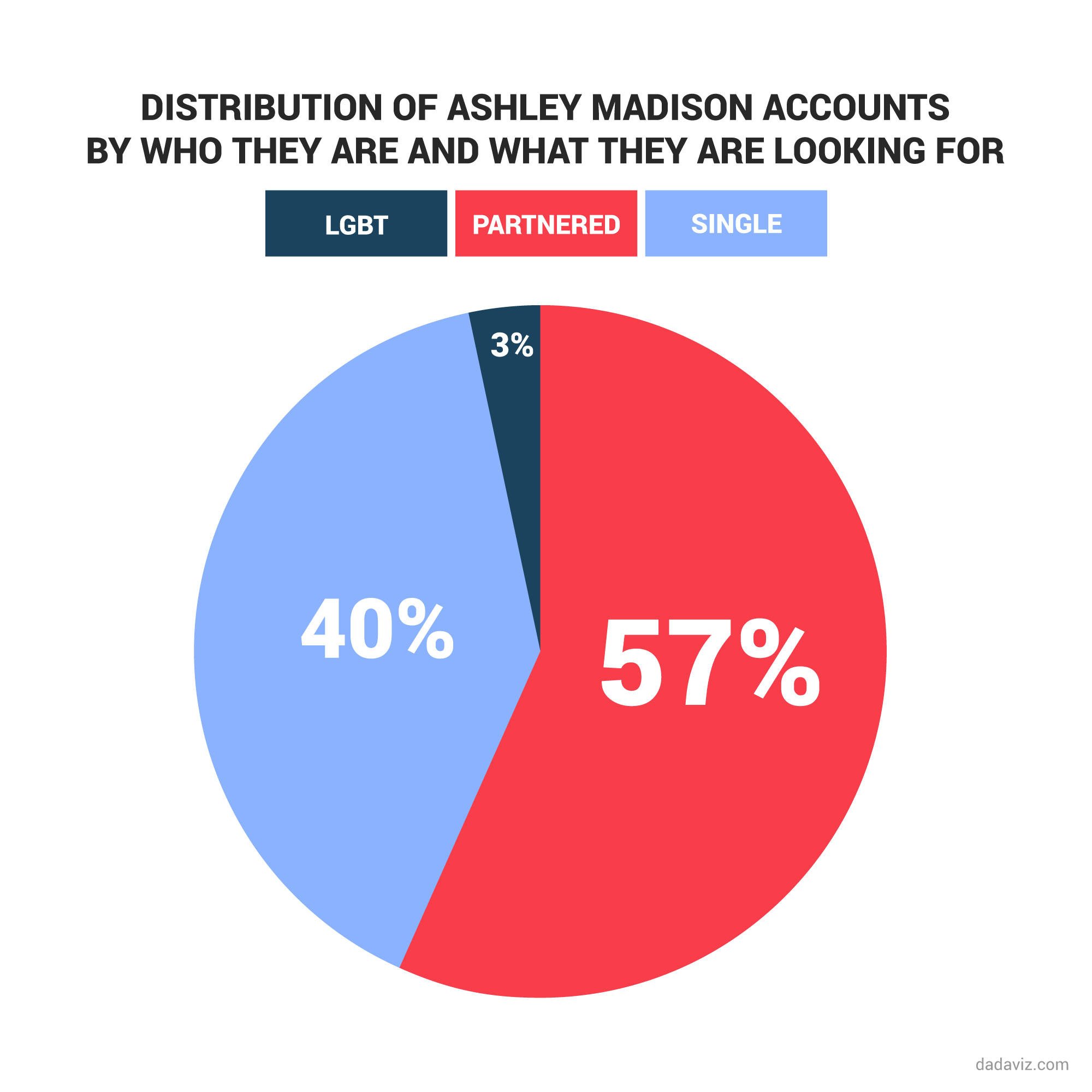 With that said, Dadaviz also found how many users were registered with a valid government email address. The United States topped the list with 1,405 government workers on the site and Canada came in at fifth place with only 288.

Employees at some of the world’s largest tech companies and U.S. universities were also analyzed. IBM, HP and Cisco topped the tech list while Cornell University topped the university list by a very wide margin.

Other interesting data breaks down the physical and personal characteristics of Ashley Madison users, who happen to be 86 per cent male.

Most users report having an average build, black hair and brown or black eyes. Blue eyed people make up the smallest proportion. 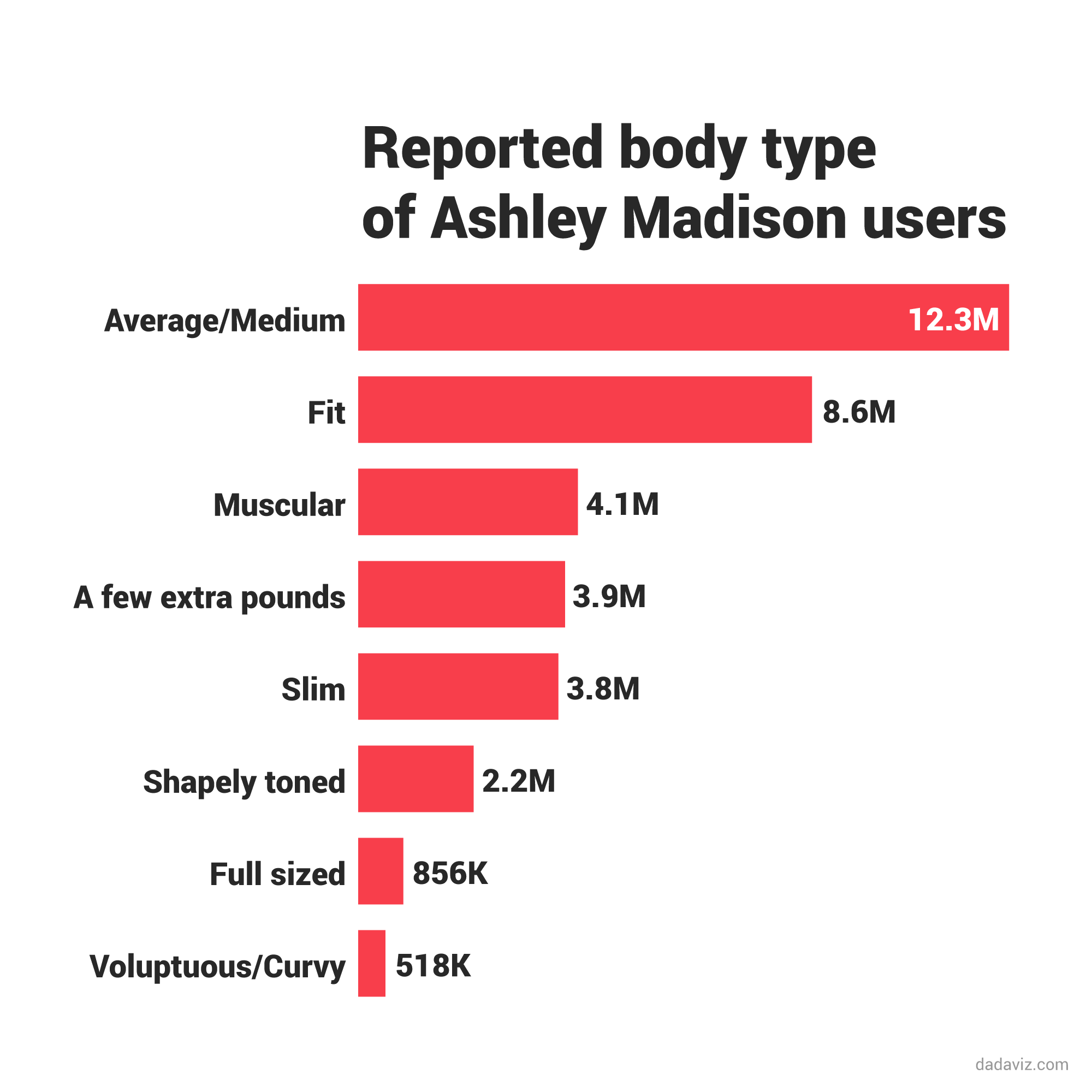 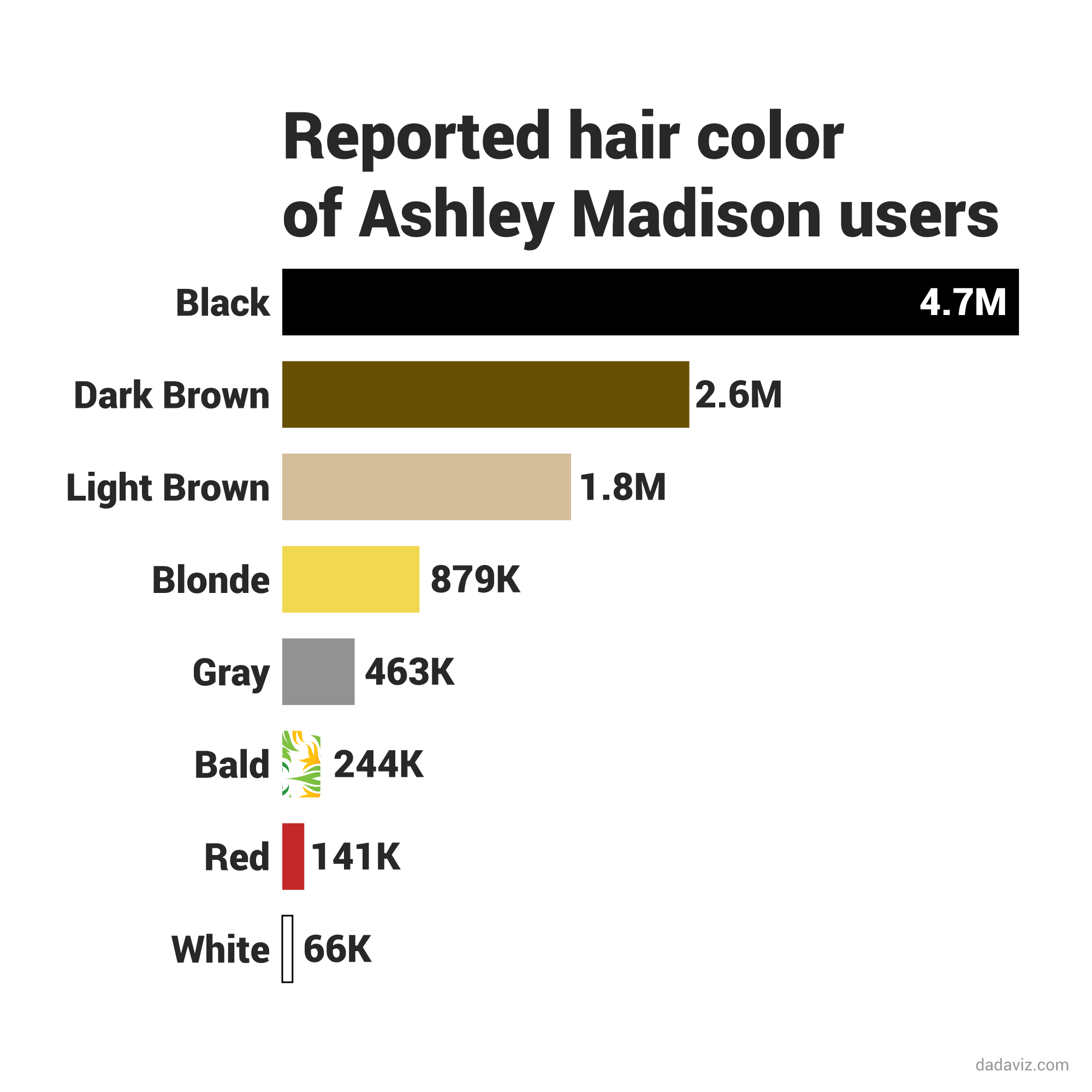 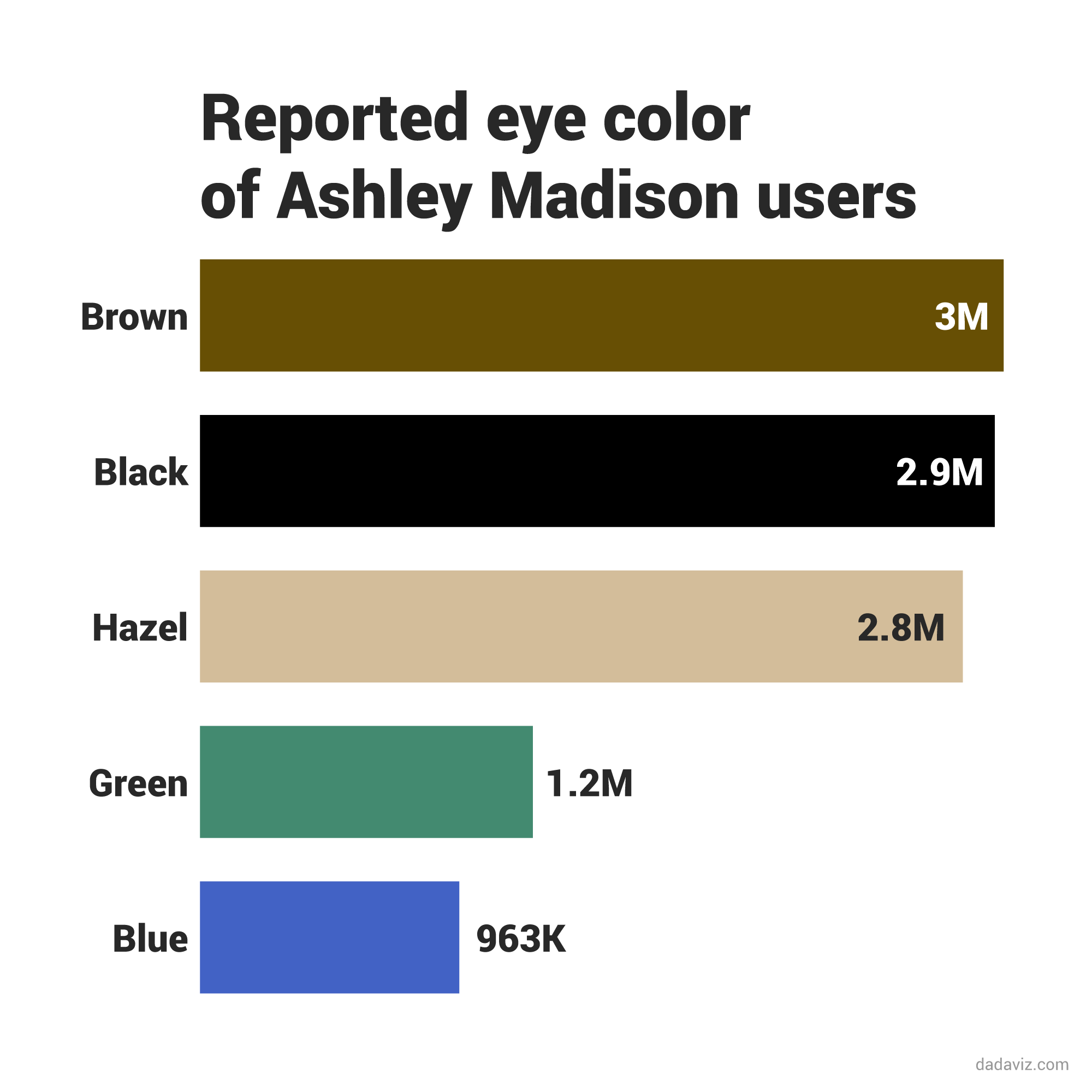