A new City of Vancouver poll asking residents to share their experiences of being Vancouverites has turned up some pretty hilarious results.

The City conducted the survey among 2,348 residents, all members of the Talk Vancouver panel, to celebrate they city’s 131st birthday on April 6.

Asked about their favourite type of rain (no, seriously), a happy 36% of respondents said they preferred gentle spring rain.

And the worst kind of rain?

Rain that’s blowing sideways, according to 55% of those polled. We couldn’t agree more.

How many umbrellas do you own?

A third of respondents said they own at least four umbrellas. Maybe one for each kind of rain and a spare?

Rain is one thing, but snow is quite another. Some 49% of respondents said Vancouver’s white winter went on “way too long.”

But while 14% said they did not “sign up for this/it’s why I left Ontario,” some 42% actually thought the snow was “beautiful.”

And of course, 93% of the Vancouverites polled said they still get a “thrill” every time they see a good Vancouver sunset.

Interestingly, 62% of the respondents had moved to Vancouver from elsewhere, and only 25% were born and raised in the city.

The top reason for moving here was the lure of West Coast living, with 22% of respondents unable resist the call of our gorgeous shores.

Jobs and school followed close behind, at 19% and 15% respectively. Oh well, we can’t all be free spirits, eh?

It seems that when they do get here thought, people know how to fit right in. Some 74% of respondents confessed to ranting about real estate.

When asked to describe Vancouver in three words, this was the result: 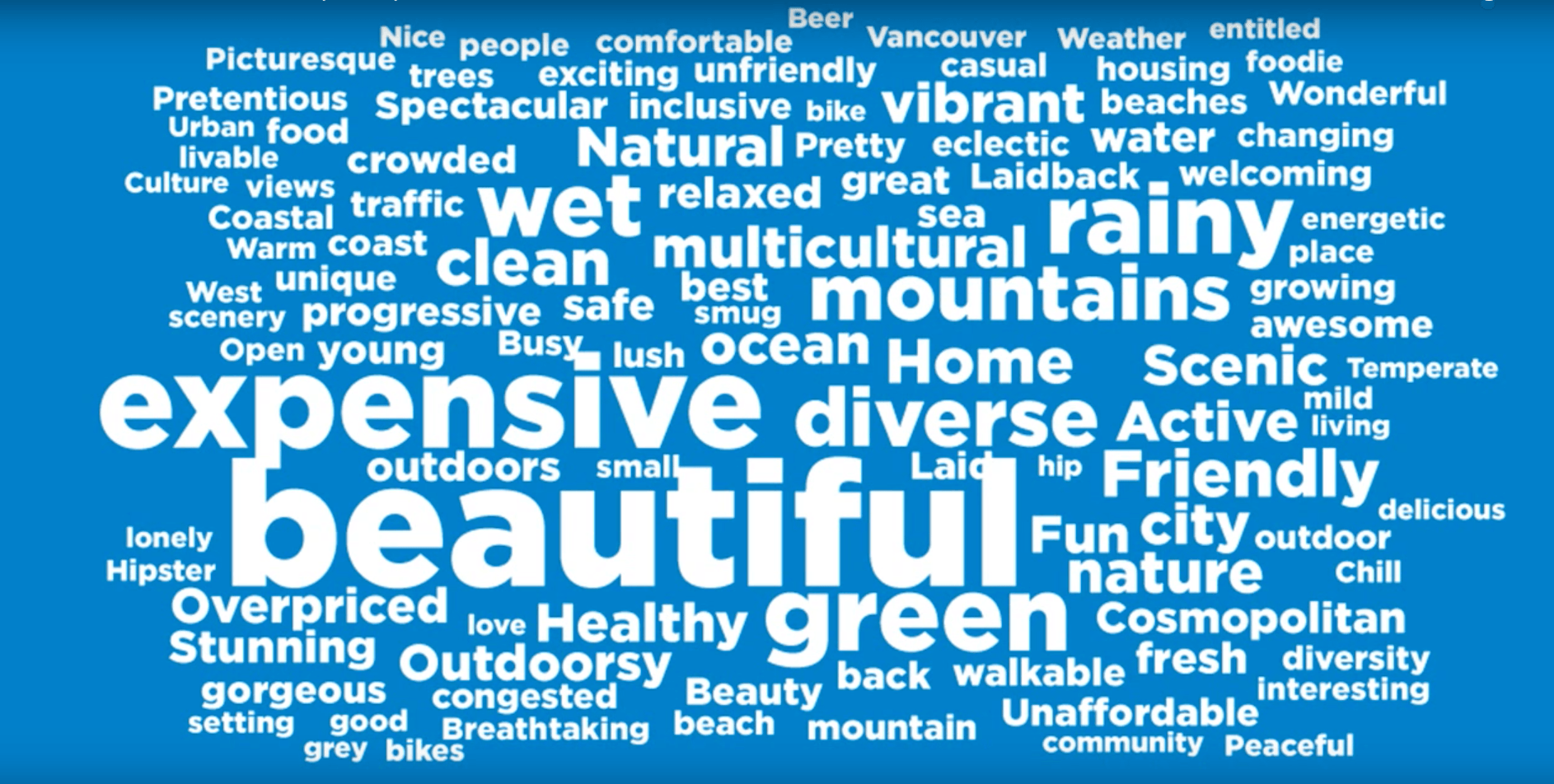 A word cloud to describe Vancouver, as per the 2017 Vanniversary poll (City of Vancouver/YouTube)

No surprises there then.

Perhaps the best responses came from people asked about the moment when they knew they had become a Vancouverite:

“The day in 1973 when I was presented with a certificate of Vancouver citizenship made out on a White Spot placemat.”

“When I saw a man on the street playing bagpipes while on stilts and I didn’t even miss a beat.”

“Eight years after moving here from southern Saskatchewan, one day I finally fathomed that the mountains aren’t *blocking* the view, they *are* the view.”