The just released 9th Annual Demographia Housing Affordability Survey indicates that  Hong Kong is the world’s least affordable housing market and our fair city, Vancouver, isn’t far behind coming in at number two. This should not come as a shock to anyone in the city as we were recently dubbed the most expensive city in North America, ahead of New York City. The trend of unaffordable housing looks to continue as very little, other than the usual political pr spin, is being done on a municipal level to alleviate the situation.

Among the 337 Metropolitan markets analyzed, Hong Kong remained the most unaffordable, with a median multiple (median house price divided by pre-tax median household income) of 13.5, up nearly a full point from last year’s 12.6. No other housing market has ever reached such an intense level of unaffordability since theSurvey began (Los Angeles reached 11.5 in 2007).

Rounding out the least affordable major markets were Vancouver at 9.5, Sydney at 8.3, San Jose (US) at 7.9, and a tie in fifth place between San Francisco and London (Greater London Authority) at 7.8. The most affordable markets were Detroit at 1.5; Atlanta, at 2.0; and Cincinnati, Rochester (US), and St. Louis at 2.5 (Figure 1). 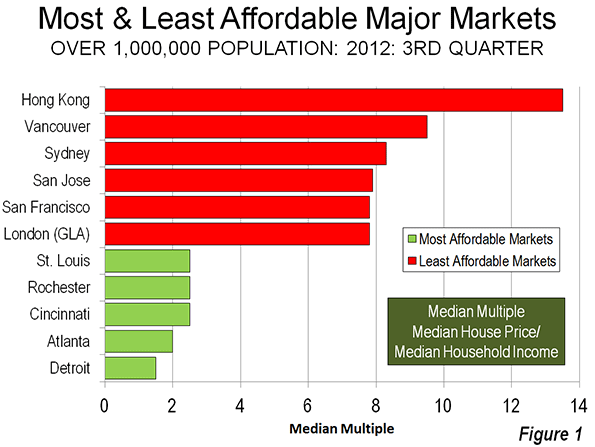