Vancouver mom, Kristen Hilderman, reached out to Twitter last night to vent her frustrations with United Airlines over a recent encounter where she was shamed for breastfeeding her infant child.

According to her statement, Hilderman was on a United flight from Houston to Vancouver on Sunday evening when a male flight attendant approached her while she was breastfeeding her 5 month-old son.

“A male flight attendant named Keith walked up to our row and said to my husband (loudly, so that everyone around could hear), ‘Are you two together?’ My husband replied ‘Yes…’ And then the flight attendant tossed a blanket at him (didn’t even hand it TO him, but tossed it AT him) and said tersely, ‘Then HERE, help her out.'”

Hilderman says she already had a blanket under her baby and draped across her lap, warm from the hot and stuffy plane.

“I went beet red and the passengers around us stared with their mouths agape. I whipped around as the flight attendant walked down the aisle behind us and I said, ‘Help me out with what?'”

The flight attendant ignored Hilderman and kept walking, even after she called out a second time.

“Because we were aboard an airplane, I didn’t want to make a scene and get in trouble, so I turned back around and continued to feed my son. I folded up the blanket and put it on the floor in the aisle,” Hilderman says.

Her flight was then diverted from Vancouver to Seattle due to fog. When passengers were able to re-board the plane on their way to Vancouver, Hilderman says she had a surprise waiting for her.

“Keith had placed a blanket folded up and sitting on my seat waiting for me. Not a single other seat. Just mine.”

Hilderman’s account is now going viral on Twitter with over 830 retweets and almost 300 favourites. United Airlines has reached out to her and promised to look into the incident.

According to United’s policy on breastfeeding, the airline has the right to offer a mother a blanket while breastfeeding or move the family to a different seat if a fellow passenger complains about feeling uncomfortable. United also states that if the situation cannot be resolved in a way that makes everyone comfortable, the surrounding passengers will have to put up with their discomfort.

Hilderman says the other passengers were nothing but supportive after the flight attendant publicly embarrassed her.

“A few passengers approached me to let me know that the flight attendant’s behaviour was completely out of line, and that they didn’t even know I was breastfeeding my baby until he tried to make an example out of me.”

For the new mom, eradicating the idea that women should hide under blankets while breastfeeding was one motive that made her speak out.

“I think the most important thing is to speak up when things like this happen, because there are a lot of people who still have antiquated ideas of a woman’s rights when it comes to feeding her child.”

She also believe it’s simply not right to treat babies differently than adults. “A baby is still a human being and has just as much right to eat without a blanket over his head as any adult.”

Part of her frustration is also based on logistics. Hilderman says getting her son to breastfeed isn’t always easy, especially with a blanket over his head.

“My lively, handsy little guy rips a blanket right off or stops feeding and starts shoving it in his mouth. I tried this morning at home and it was quite the ordeal.”

According to one of her recent tweets, United Airlines is expected to follow up on the “frustrating experience” in the next 48 hours.

The full text of Hilderman’s story can be found below. 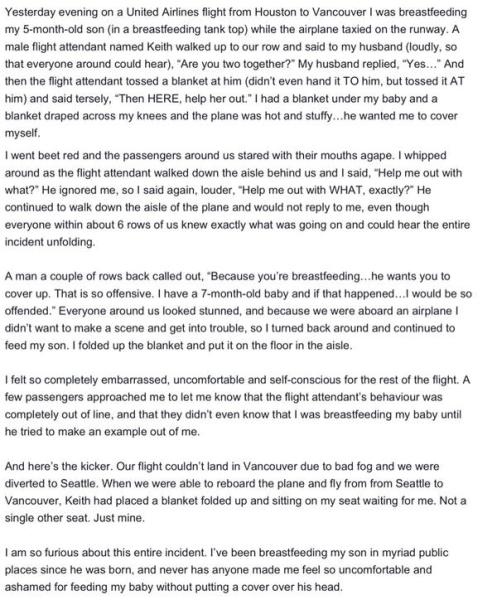