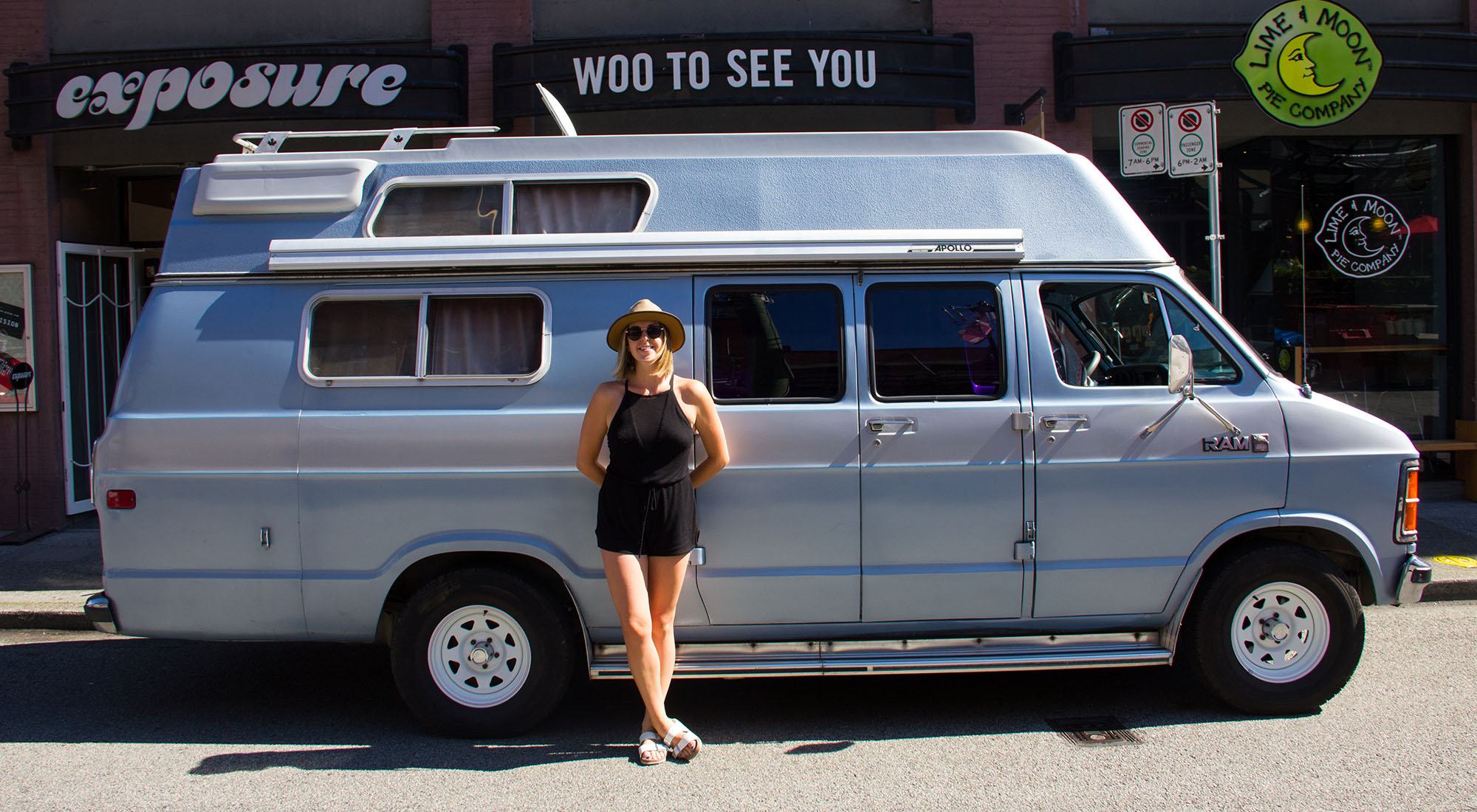 Emily Chambers and her van in Yaletown (Jenni Sheppard/Daily Hive)

A Vancouver musician is living in her van… because she can’t afford to live in Van.

“It’s been a lot easier than I thought it would be,” Emily Chambers told Daily Hive. “It sounds crazy but it’s not. I’m loving it!”

Chambers bought her 1984 Dodge Ram 250B Campervan in April, with plans of touring, but since July 1, she’s been living there permanently. 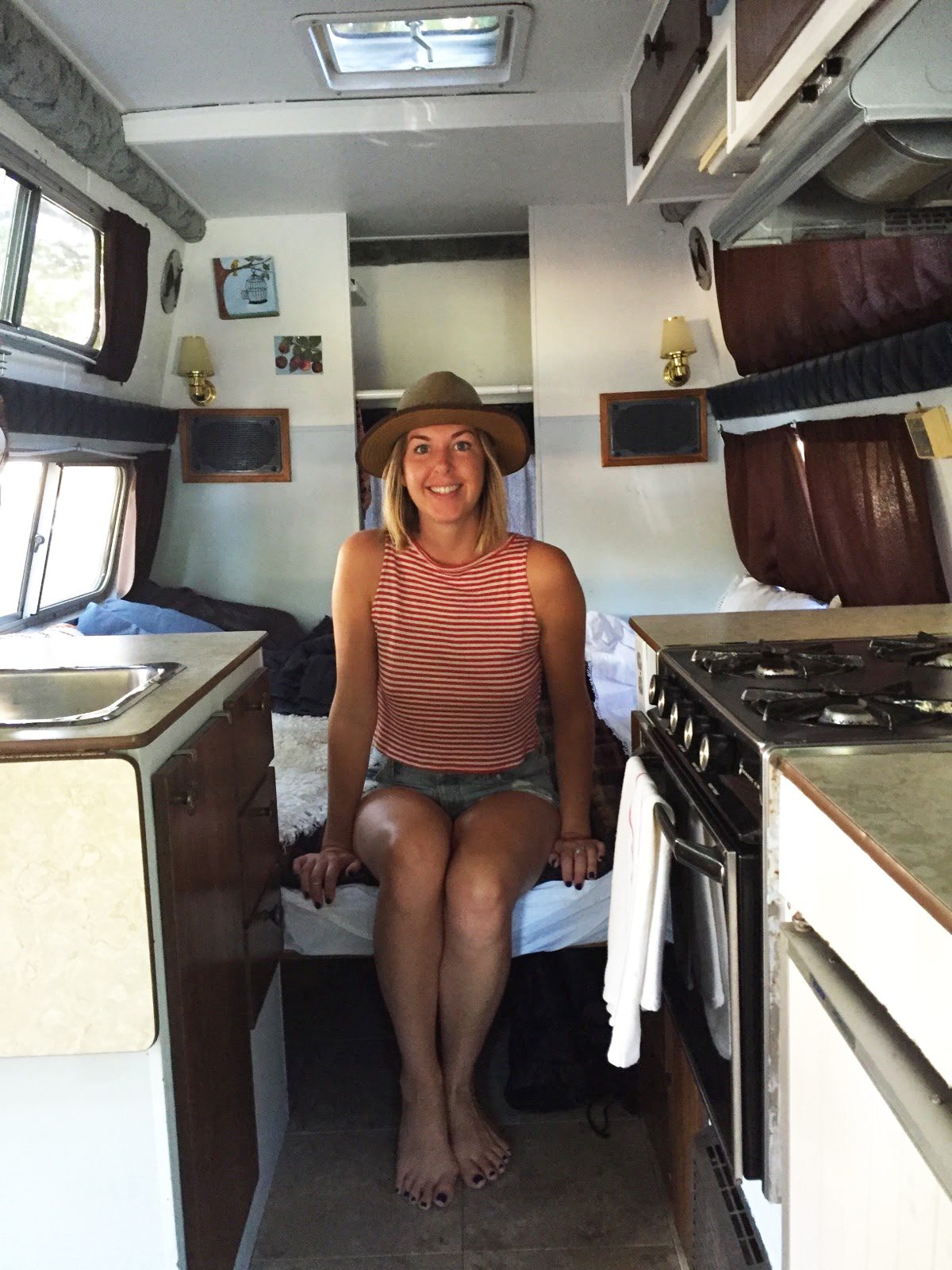 The soul and R&B musician previously rented a 400 sq. ft. studio apartment, with a trundle bed that pulls out of the wall, in the West End.

But when the 27-year-old quit her insurance job in April to focus on her musical career, she could no longer cover the $870/month rent.

So she started subletting the apartment, with her landlord’s permission, and moved in with her sister and her brother-in-law.

In July, their landlord kicked her out, saying they didn’t want three people in the house – and ever since she’s been living in her faithful van. 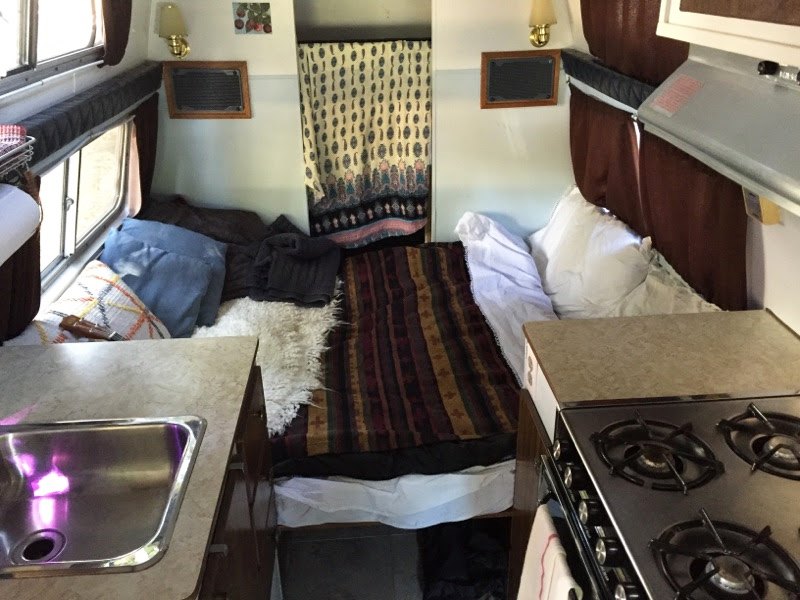 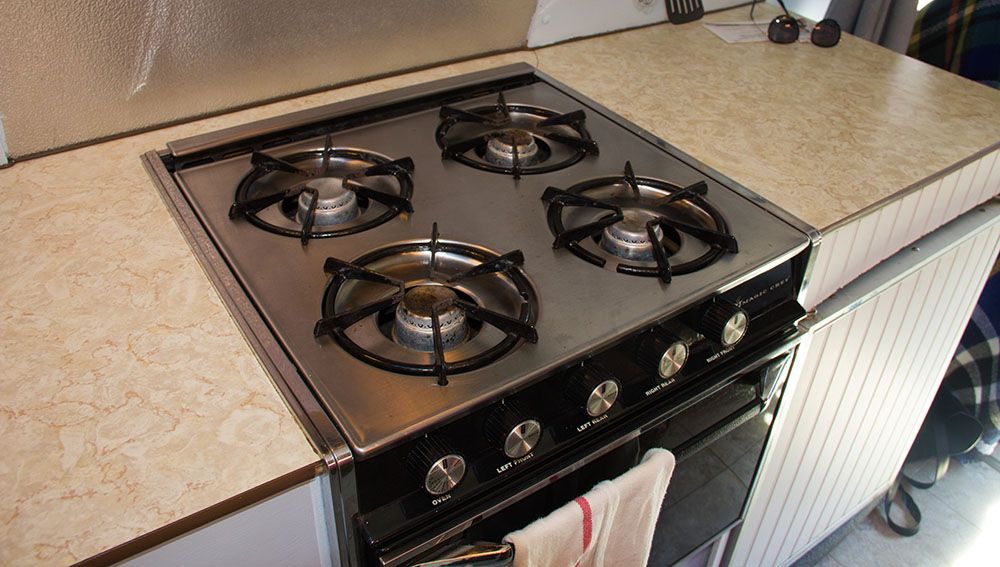 “She eats gas but not having to pay for any accommodation and having a sense of home, no matter where I go, is really stabilizing and grounding for me,” says Chambers.

While being able to save money has helped, says Chambers, living in her van has turned into much more than that.

“The one really awesome thing about living in a van is that it really gets you out into the world very quickly,” said Chambers.

“It’s allowed me opportunities to meet some more people… and then there’s the freedom. It’s really exciting to be able to go wherever I want and take my home with me.” 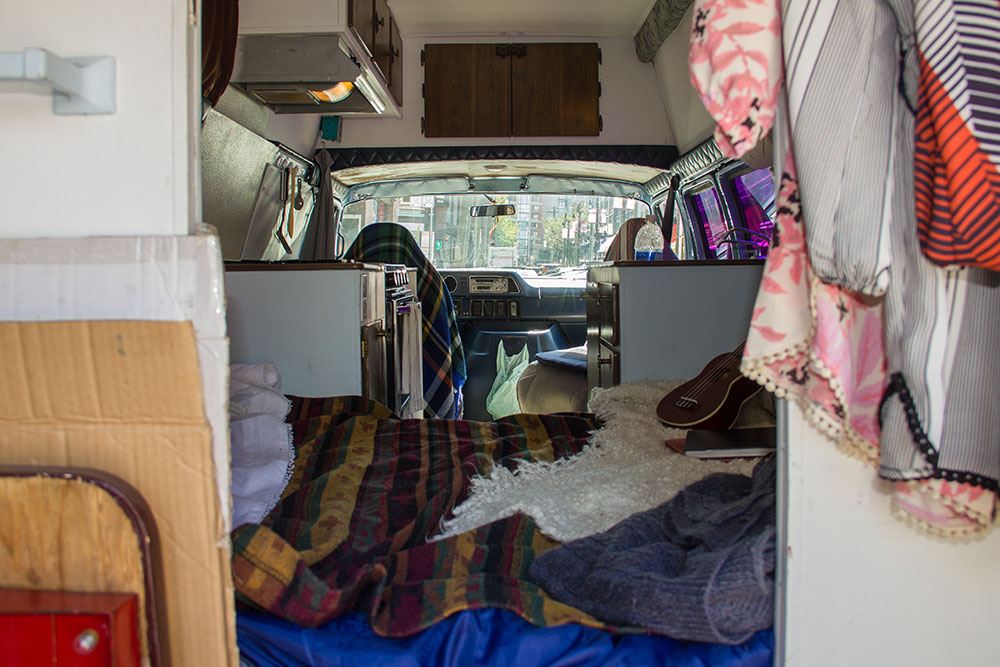 While Chambers has been touring a bit over the summer – amazingly cramming five guys, a drum kit and a PA system into the van – her days are mostly much simpler.

“I usually shower at friends’ houses or my yoga studio. Sometimes I take a swim in the ocean instead,” she laughs.

“I get ready for the day here in my van. I have an outlet so I can do my hair…I’ve kind of taken to hats.”

Chambers says she usually cooks breakfast in the van, but eats it at the beach, before heading to coffee shops for work, meetings and wifi.

In the evening, she plays gigs and then heads home – often listening to the Beastie Boys, Carole King and Bruce Springsteen on the van’s original tape deck. 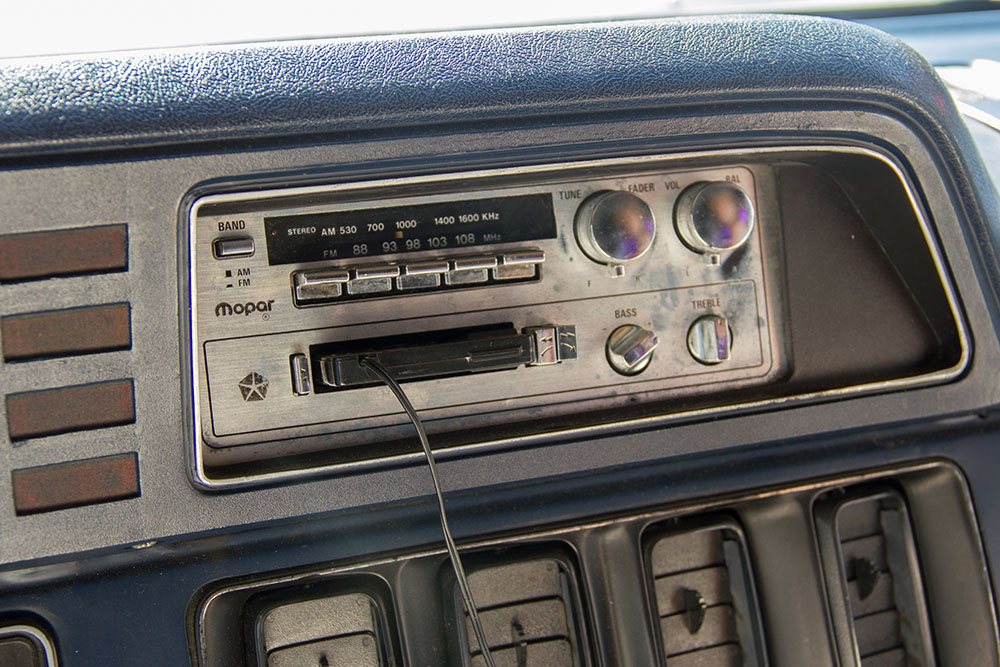 “I usually cook dinner in here too. I’m pretty good at cooking my meals, because I’m on a budget. Then I find a place to sleep, level her out and put my earplugs in.”

Chambers says noise is a bit of an issue, and because her van is so tall, it feels the wind – she’s often woken up by the van swaying, as cars zoom past early in the morning.

One issue is finding residential areas where she can park overnight, she says, but is often able to find somewhere up near UBC.

“You can’t overnight park at the beaches though, and driving this thing downtown is such a headache.” 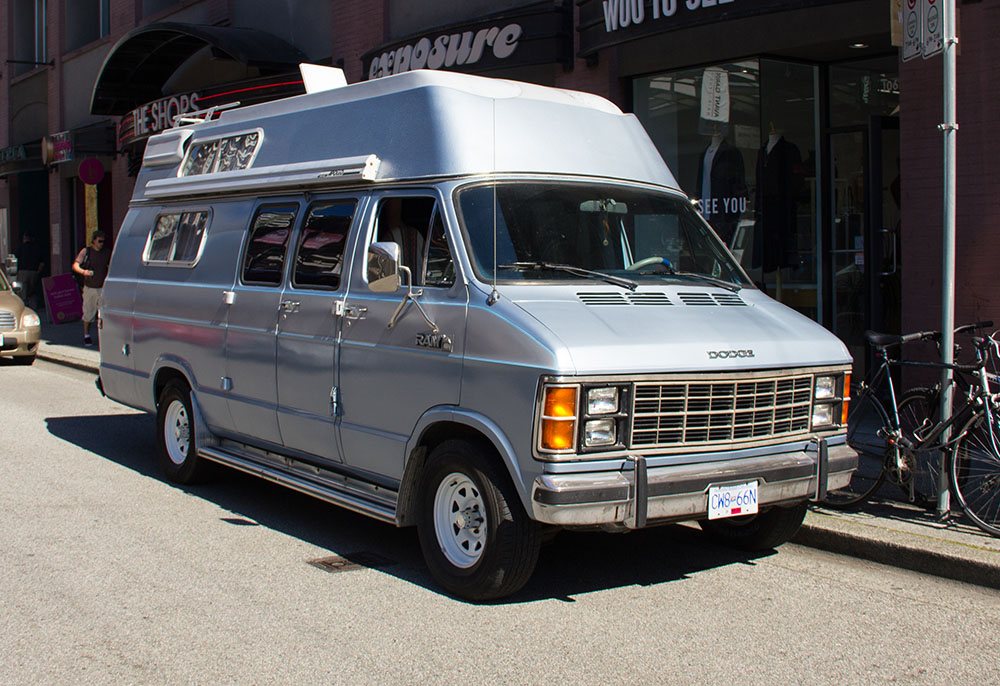 Chambers says she would recommend living in a van, if you can let go of some particulars of daily life. Indeed, some of her friends have been surprised she looks clean.

“But those things have been really easy for me to let go… It’s definitely simplified life a lot.” 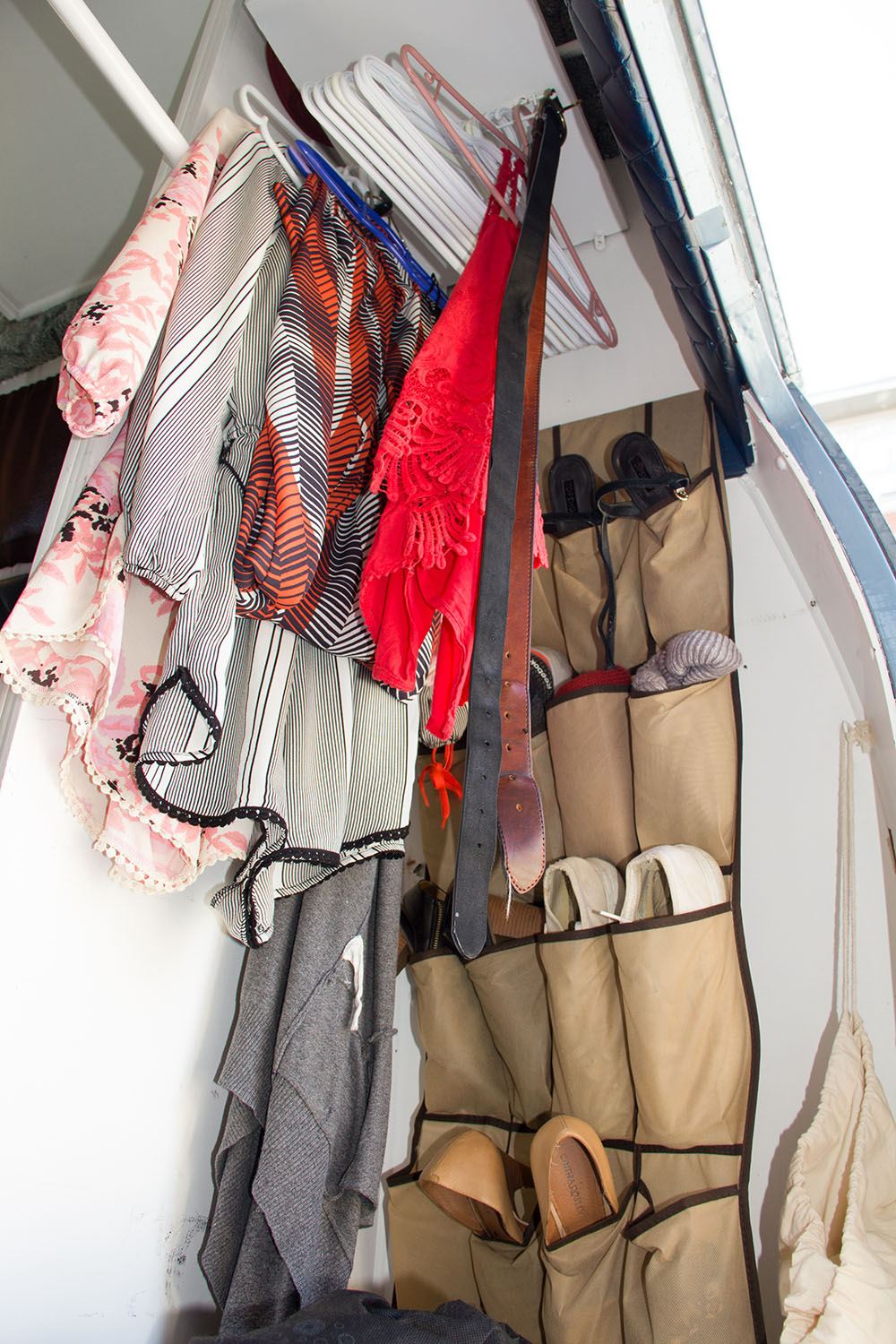 Chambers thinks she’ll be living in the van until December, when her sub-letters are moving out and she hopes to be able to afford to move back in.

But she only plans to stay for a month, while she finds new sub-letters, saying she can’t bring herself to let the apartment go.

“I want to hold to it, because if I leave I think the rent will go way up. So just in case I ever need it to live in it again…

“Plus I’m not sure the van would be that fun to live in, in winter.”

As well as saving money by living in her van, Chambers is also trying to fund the release of her first EP, Magnolia, through a Pledge Music online campaign. She will officially launch her EP at Biltmore Cabaret on September 14. 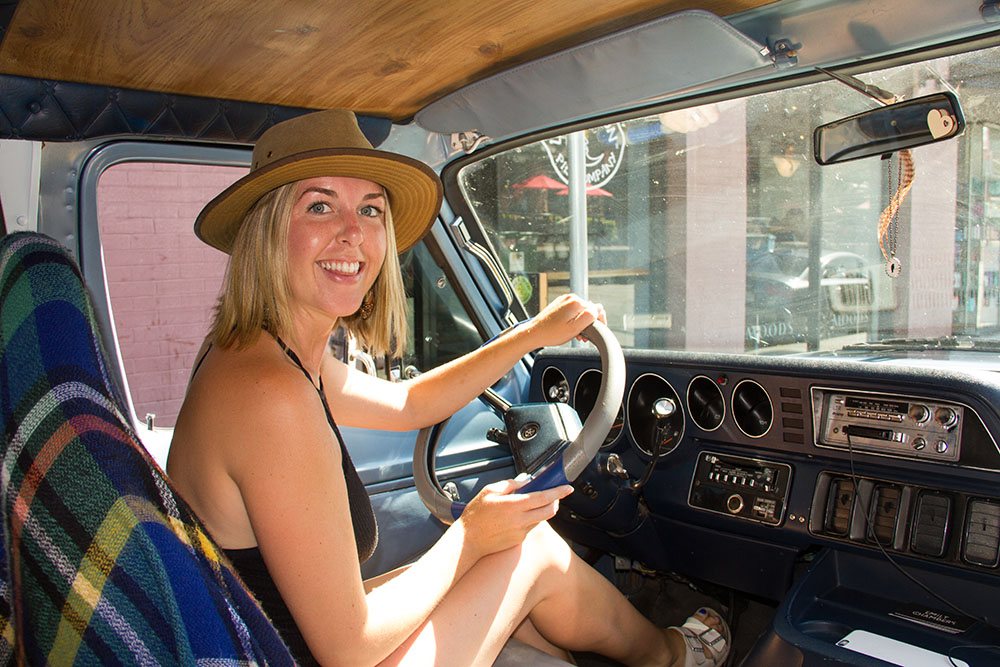