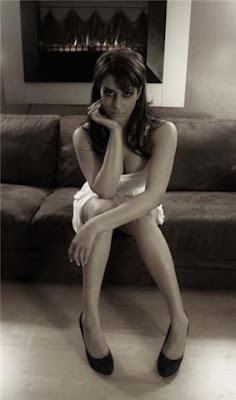 Today we’re profiling local hyper blogger Jennifer Pamela Sandhu. Her blog JenneLALA is an honest no holds barred look at celebs and their daily shenanigans, sprinkled with some music and a wicked sense of humour.

A bit about Jennifer, she is far from what anybody would expect. A girl who hides behind the tears of a clown, the pretty face is merely a disguise. “Come see the way I’m livin if you really want to…”

VcB: What made you want to start your own blog JenneLALA and why the celebrity focus?

Jennifer: Honestly, what prompted me into actually going through with starting my own blog was because I was sitting around jobless with not very many options for entertainment. One of my girlfriends, Sonia Ryan (who is absolutely FABOLOUS) had started one recently and I decided to ever so kindly swagger jack. So many people are understandably confused on the title, my full name is Jennifer Pamela so it’s just a nickname I came up with – Jennela. (The LALA) is added in regards to my PASSION for all things musical.
I focus mainly on celebrities because I’m a fame whore as well. Joking. It’s purely for the entertainment. Celebrities start conversations, sell magazines, and provide us with an outlet on a lazy Sunday afternoon, and I haven’t met one person who isn’t secretly curious about what happened on The Hills last week. It’s a guilty pleasure. Perez has met his match.

VcB: You’ve stated that you are in the process of writing a book, what kind of book is it?

Jennifer: Yes, yes. Aside from updating my blog, I decided to channel my energy into writing. I’ve always had a fairly “wild” imagination (ask my 4th Grade teacher Mr. Wong, apparently I used to write in my daily journal that my 3 cats were adorned with diamante’ collars.)
The novel is non fiction about a 26 year old Hispanic girl whose in quite the FML situation. She’s finished school with no short term future options, she can’t find a man, and she feels out of place in her current surroundings so she decides to at the spur of the moment, find a job and trek to L.A. The novel highlights the ups and downs of being in an unfamiliar city away from home, her hustle in the career field, and her friendships and relationships along the way. The theme of the story is that to prosper and reach your goal in life, there will obstacles, but you have to pick yourself up and keep your game face on in order to get there. I throw in some great characters and some life lessons that I’ve gone through as well, so rest easy, it’s not always about ME…

VcB: Kim Kardashian, she is your hero, now I know she is hot as hell and that ass is amazing but why Kim?


Jennifer: Oh God. I almost wished that I had picked Maya Angelou or even Angelina Jolie has my hero because this makes me seem quite shallow I’ll have to admit. Kim Kardashian is no doubt a gorgeous creature with ample assets if you know what I mean. But the fact that she’s come for being the obscure (late) Robert Kardashian’s daughter to a celebrity (D lister albeit) whose fawned over and gossiped about all over the world deserves a pat on the back at the least. She overcame the scandal of her infamous sex tape and learnt how to turn something so negative into something positive for herself. I’m the first to admit that her whole family is happiest in the limelight, but who wouldn’t be? They know their niche and they know how to work the media in their favor, so I actually see Kim as a self made entrepreneur rather than just another pretty face. Although, it is MOST DEFINITELY a pretty face.

Jennifer: Oh the entity that is Speidi. Those two definitely provide some giggles.
Heidi: “Heidi honey if you don’t have anything smart to say, don’t say anything at all. And stay away from open flames, because of the toxic amounts of silicone God has apparently wanted you to enhance yourself with will go up faster than your husband can call the paps to let them know your whereabouts.
Spencer: “Spencer, sorry “King Spencer” you are quite the chap. You’ve managed to pimp you and your current wife out to the tabloids in order to gain D list status by staging photo ops, trying and failing at rapping, roaming around town in outlandish getups, and running that caveman pie hole of yours. For this, I salute you. Just do us all a favor and snip.

If I could do one thing to them both I’d call up Lauren Conrad’s people (if ever possible) and TMZ, set up a highly public meeting place, and let that poor disgraced girl just go to town on them. You’re welcome.

VcB: Who would win in a fight between Angelina Jolie and Megan Fox? 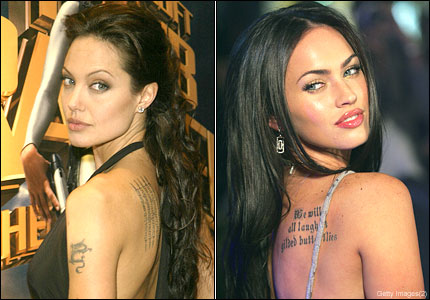 Jennifer: Ok this is a no brainer. Santa Angelina mind you is otherworldly (and it’s not just because of her pillow lips). The woman may be a home wrecker but she rescues disadvantaged children, contributes her hard earned money to charitable organizations and is an angel of God. That and the fact that she can work a machine gun with those bony little arms without getting her hair out of place should be enough of a give in. Aside from Megan Fox’s sexiness and maneating talents, all she has is her potty mouth and Marilyn tattoo. One withering glance from Angelina, and Megan will wish she was a mute.

VcB: If you could meet any musician dead or alive who would it be and why?

Jennifer: Hands down Michael Jackson. Obvious no? And I’m not one of those “oh poor Michael died” bandwagon jumpers either. My Dad owns every single one of his records and CD’s (I know records right? Ha) and my most significant childhood memory is sitting on the living room floor shaking back and forth (no I wasn’t physically challenged, I just found it tiresome to actually dance) listening to Bad. That man was not only an icon, but such a complex being. I would love to sit down with him and just have one good candid conversation. I’d love to know what he thinks about his critics, his inspirations, and his take on the new season of Melrose.

VcB: Favourite album of all time?


Jennifer: This is one question that I doubt I can apply only one answer to. I love music. I honestly find it hard to do simple tasks like driving, sleeping, and bathing without it! I’m not just fond of one specific genre either. I’ll listen to everything from Cyndi Lauper, to George Strait, to Young Jeezy. So I just cannot be forced to pick JUST one favorite.

I’d rather say my most memorable albums are Ace Of Base & the soundtrack to Dangerous Minds. Ace of Base because it’s the first album my Dad ever purchased for me and Dangerous Minds because I honestly think it’s the first time I heard gangster rap. I won’t lie, I was a tad sheltered as a child.

Jennifer: Again. Without music and television I’d be an empty shell of a person whose left to do horrific things like actually communicate with living br
eathing humans for entertainment. Haha. So, for this reason I’d rather reveal my TOP 5 mindless prime time shows, although I’m sure I can go on and on. But that’s neither here nor there.

5) Rob Dyrdek’s Fantasy Factory – I am absolutely head over freaking heels for Rob Dyrdek. I love laughing, and joking around, and it’s no surprise that I love my pretty white boys and he encompasses all 3 of my favorite traits. He just has such an air about him that makes bashing your head into a padded wall seem so effortless and natural, I love it.
4) Cougartown – Courtney Cox’s mid age antics are hilarious and just so unabashadly honest that every woman, young or old, can relate somehow. And her neighbor’s quite the looker as well.
3) Melrose Place – I can’t seem to look away ever since the pilot, although I’ve never even seen the original. I know, the horror!
2) Two And A Half Men – I have a thing for older men and Charlie Sheen does it for me. Jon Cryer is a comedic genius and I love “Jake.” I want one of him when I’m older.
1) The Hills – I haven’t missed a single episode. This season is most definitely much more different and catty than the last 5, but it’s a guilty pleasure. Really? Who can look away from such dramatic happenings?!


VcB: If there is one thing you would like to do in this world more than anything what would it be?


Jennifer: Wow. This is a doozy. We went from TV shows & music to something deeper than rap (as Rick Ross so eloquently puts it). OK after much thought, I’ve decided to can the jokes, and be forthright and honest. I’ve been through some difficult times recently, and it’s only made me TRY to strive to be a more positive and optimistic person. If I can keep up with that, I’d like nothing more to just be happy and propel myself forward education, career, and lifestyle wise. I have some great friends and a family that I would never trade for anything, all I need is a man! I’d love to make someone happy and share my past, my experiences, and my future with someone whose willing to do the same. Aside from all our differences, I can honestly say that the end all be all of existence is plain and simple – happiness.


VcB: If there is any place in the world you could live where would it be and why?

Jennifer: I’m sure anyone can guess that I’m Just Not That Into Surrey [can’t really blame her on that one]. No offense to the current habitants, but contrary to popular belief, I haven’t grown up here. I’m actually from Kitimat, a small town in Northern BC so it’s no surprise that I tend to feel cooped up at times. Vancouver is a beautiful city, but because of my seasonal depression, I’d much rather live in the States, preferably California because I’m sure the people there are always shiny, happy and sun kissed. That, and “I thought I told you, Imma star…”

That concludes our interview with the lovely Jennifer Pamela Sandhu, we highly recommend you check out here blog and many thanks to Jennifer for doing this. We at Vancity Buzz wish you all the best in finding that one thing we all want in life, happiness.