After months of asking for data, one Vancouver company has determined exactly how many of Vancouver’s Westside homes are being sold to foreign investors, and the numbers are quite telling.

Bing Thom Architects (BTA) have found that 66 per cent of homes sold in the West Point Grey, University Endowment Lands and Dunbar neighbourhoods between August 2014 and February 2015 were sold to Chinese buyers, confirming the much assumed impact of offshore investors on Vancouver’s steaming real estate market.

The study looked at the sale of 172 homes on Vancouver’s Westside, totalling property value of $525 million in one of the city’s wealthiest districts. The average sale price of these homes was $3.05 million.

BTA retrieved the data used in the survey with help from Vancouver-Point Grey MLA David Eby and determined foreign Chinese buyers by looking at the full names of property owners, noting their assumption that a landowner with a non-Anglicized Chinese name is an indication that the owner is a recent immigrant to Canada. This is the same name analysis methodology used by governmental organizations for public health and political science. 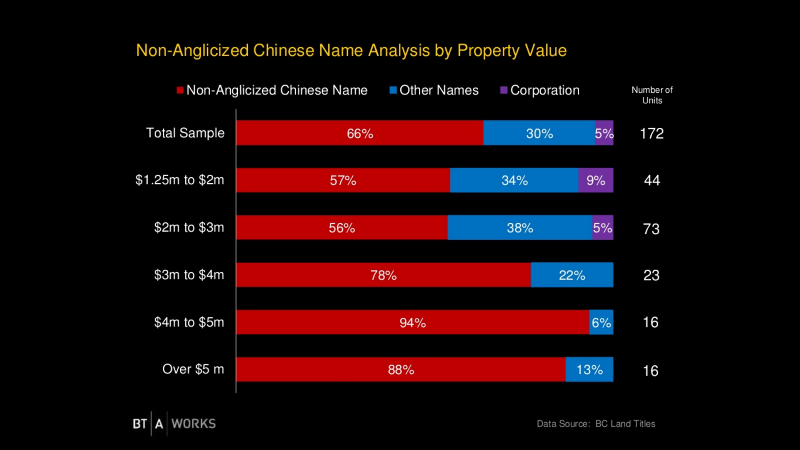 The study also found that 94 per cent of homes purchased with money through HSBC were from Chinese buyers, with similar numbers for CIBC, Royal Bank, Bank of Montreal and Toronto Dominion. The Scotiabank and Vancity Credit Union had the least amount of Chinese buyers.

BTA recognizes that their study might appear to be playing the blame game on one specific race.

“The purpose of this study is not to necessarily solely focus on a single ethnic group, but in understanding how residential real estate might be consumed in the City of Vancouver with a focus on the enabling financial practices and structures in Canada … Instead of falling for a hysteria of a mindless horde consuming residential real estate in Vancouver, this study starts to map the logic, apparatus, and actors of demand and globalization for housing in the City,” said Bing Thom.

But further data revealed in the study shows there are some other unique buying patterns in the area, such as the occupation of the landowner and how many homes were purchased without a mortgage.

A total of 23 per cent of people on the land titles for these properties identified their occupation as homemaker or housewife. This was the largest subset of people under one occupation, just ahead of “businessperson” at 18 per cent. 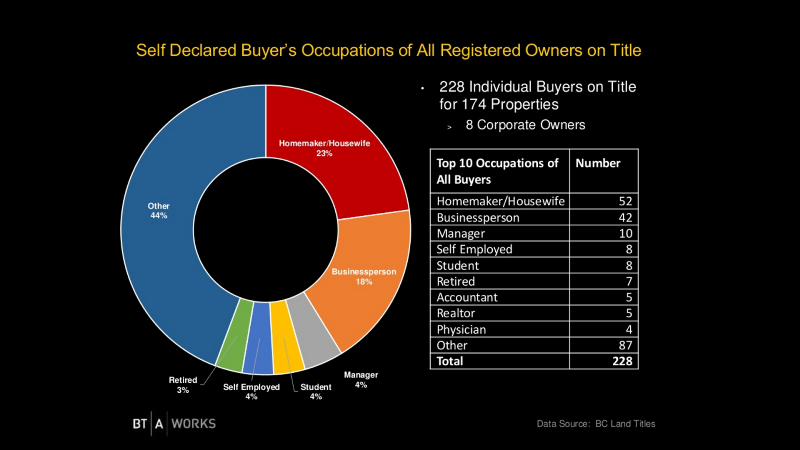 Furthermore, 32 of the properties, or 18 per cent, were bought with straight cash and no mortgage.

The homes included in this study are undoubtedly some of the most expensive in Vancouver and the metropolitan area, though the analysts state more research must be done in other neighbourhoods to truly determine what is causing Vancouver’s real estate market to soar to such unattainable heights.

UPDATE: Shortly after this study was released, Mayor Gregor Robertson released a statement on housing affordability, calling for residents to think more broadly about how to counteract the growing real estate market rather than blaming one race.

“We do need far better federal and provincial tracking of data on international investment and absentee ownership.

What we don’t need, however, is the blaming of any one group of people – or any one kind of last name – for the challenge of housing affordability.

This is a public policy issue, not a race issue – and any confusion to the contrary only risks dividing our city and distracting Vancouver and our region from seeking the urgent action that is needed from the Provincial and Federal governments.

It’s time for all levels of government to start working together to address housing affordability, across the board, so that Vancouver remains a city that people of all ages, backgrounds, and income levels can call home.”

Read the complete study below:

Ownership Patterns of Single Family Homes Sales on the West Side Neighborhoods of the City of Vancouver: A Case Study from ayan604