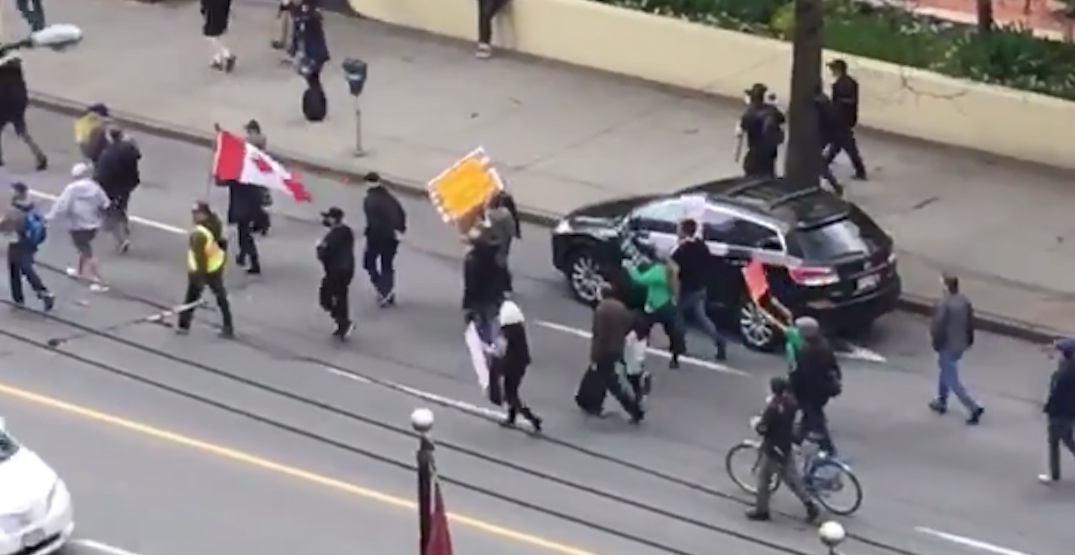 For the second time this month, coronavirus conspiracy theorists have taken to the streets of Vancouver in protest against the current COVID-19 health safety measures that have resulted in the shutdown of the economy.

Protected by a Vancouver Police escort, a group of between 70 and 100 people stopped traffic in downtown Vancouver on Sunday afternoon, as they made their way along Beach Avenue and down Burrard Street, before circling back into the West End via Robson Street.

In the live video stream of the protest recorded by Dan Dicks, a self-described “investigative journalist” and a “documentary filmmaker,” passersby and residents in the balconies of the buildings along the marching route could be heard yelling “go home” while others heckled and cursed the group.

Police were seen conducting a search of an individual outside St. Paul’s Hospital, but it is not immediately clear whether this person is a protester.

Dicks alleged eggs were thrown at them during the march, and despite their pleas for reduced health safety precautions, some protesters could be seen wearing masks.

Anti lock down protest happening in the west end and escorted by Vancouver police, this is how we use our public resources. Fuck these idiots pic.twitter.com/neDpfJfKRt

Of course, the #protest in #vancouver is as small and pathetic as it rightly deserves. But oh, look… look what’s snuck in. Antivaxxers literally will cause harm with no regret whatsoever. (I darkened the guys sign so you can read, that, in fact, the “lockdown is communism”) pic.twitter.com/jTBaLYQav4

Anti-quarantine movements have emerged elsewhere in Canada and the United States, and this particular act of disobedience was far larger than the handful of protesters that showed up to the April 12 protest in Vancouver.

These groups are against the physical distancing and self-isolation measures that have led to mass layoffs and closures of businesses, which have been deemed by governments, health officials, and experts as necessary to prevent global death tolls reaching in the millions. Some have even called the coronavirus a “hoax.”

“This lockdown is not justifying the numbers. It doesn’t add up,” said Dicks today.

Some protest in downtown Vancouver.

I heard some chanting:

Perhaps this protest is some type reaction against some of the reactions others have had to #covid19 #coronavirus . pic.twitter.com/KsKzB9vPnK

Saw a 70/30 split between support and hate at the #endthelockdown march in #Vancouver today. A few people shouting “go home” and many cheering from their balconies. Captured a supportive moment here: pic.twitter.com/eelyGXYzxr

Last week, after conspiracy theorists announced their plans for the protest, Vancouver West End MLA Spencer Chandra Herbert took to Facebook to address the concerns raised by his constituents.

“In times of crisis there will always be those who attempt to shine the light on themselves to take advantage of others fears, and spread their own uninformed conspiracy theories. It’s disgusting, but always the way,” wrote Chandra Herbert.

“The event planned for English Bay is one such event, organized by people connected to Holocaust deniers. I’ve alerted the Ministry of Public Safety for their information, and reached out to the Vancouver Police who have the responsibility for enforcing orders. I don’t want our community’s safety threatened by selfish people who won’t do their part to stop COVID-19… Let’s keep staying positive, staying close to home, and looking out for each other — together we will win this fight.”

In response to the first protest earlier this month, BC health minister Adrian Dix said these individuals represent a tiny minority, and the public cannot afford to lose sight on being part of the effective collective solution to control the rate of growth of the deadly epidemic in the province.

“That may be inevitable in these times that people are attempting to, essentially, promote themselves. What I think, genuinely, if you look in any depth at their other views, are marginal views,” said Dix.

“Don’t allow people who are attempting to promote themselves by using the suffering of others to distract us. Don’t promote them, don’t look at them, but focus on what we need to do together.”