A Vancouver project aims to make life easier for newly arrived Syrian refugees by mapping out services and resources that might be useful for them.

A team of 50 volunteers worked tirelessly through November and December to launch the website, and the maps are available both online and in printed form. UBC PhD student Jennifer Rae Pierce is the brainchild of the operation and was inspired by a November press conference she attended on the refugee crisis. 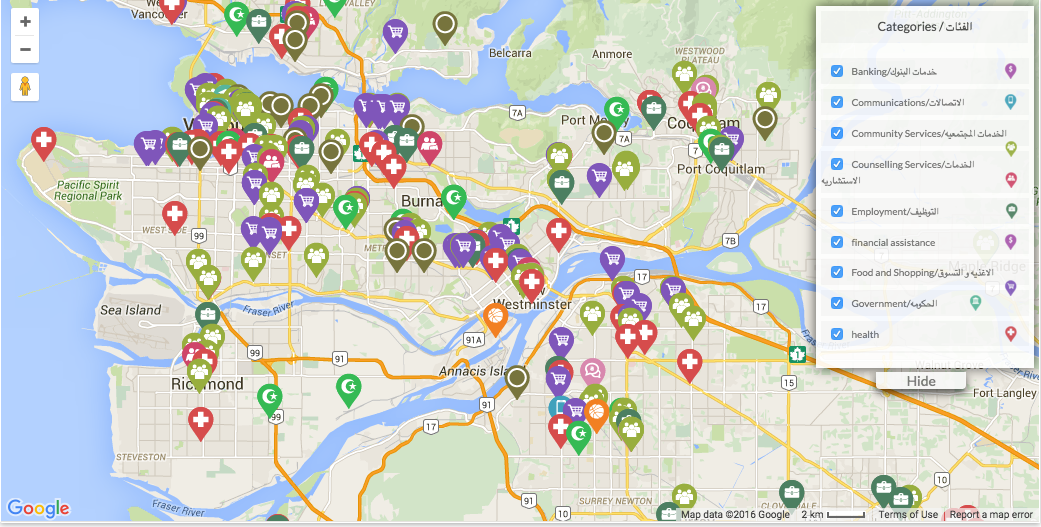 “I was inspired by their calls for help,” Pierce told Vancity Buzz.

“It was also informed by my own experiences.”

Pierce said she has recently lived abroad and that made her realize how difficult it can be for immigrants to find resources in their new cities.

In order to find appropriate resources for the newly arrived refugees, the team interviewed families and households from Syria or nearby countries and found several key trends.

“Their needs often revolved around enrolling children in schools, finding English language courses that they could take, connecting with other people in their community, so we included those items, especially places of worship,” she said.

“For the Muslim community, it’s a major part of meeting other people of similar backgrounds and similar practices.”

The website only just launched in the past week, so Pierce said they don’t have any firm traffic numbers yet, but she’s hopeful it’ll gain traction.

Pierce believes offering services like the Vancouver Welcome Map is important for refugees who might be feeling isolated. She said refugees differ from immigrants because they’re coming here out of desperation, not choice, so those feelings of isolation might be exacerbated.

“The amount of community and social connections that they have here would be very little. So because of that, I feel it’s very important that we support them.”

“Another reason is because of the animosity between the Islamic culture and the cultures in the West, I think it’s especially important that the message we send to incoming people is one of welcome so that they know that they don’t need to hide here and that their lives can be better here,” she said.