Before she became the wholesome vampire T.V. mom we all know and love, Yvonne De Carlo was breaking hearts and lighting up the silver screen as a glamorous Hollywood starlet.

The resourceful daughter of a waitress with big ambitions, De Carlo constantly reinvented herself.

A natural at publicity, she shrewdly kept her name in the public consciousness with a life that served as constant fodder for ever-hungry Hollywood gossip columnists. Media rushed to report on her numerous dates with the big names of the day as De Carlo left a string of famous lovers in her wake.

But before she was breaking hearts in Hollywood, De Carlo was a Vancouver-born girl who performed at local theatres and nightclubs.

Born in 1922, she started out life as Margaret Yvonne Middleton, later combining her middle name with her mother’s maiden name to give herself the stage name for which she’s known.

Nurses at St. Paul’s Hospital remembered De Carlo’s mother, Marie, shouting before giving birth, “I want a girl. It must be a girl. I want a dancer!”

She got her wish. De Carlo trained at June Roper’s British Columbia School of Dance, where she showed off a natural talent for both singing and dancing. It was there that she got her first opportunities to perform, later playing in shows at the Orpheum Theatre and scoring a gig at the brand new Palomar Supper Club.

Before long, De Carlo and her waitress mother went out to Hollywood with dreams of making it big. But it took a while. De Carlo performed in clubs at night and auditioned at studios during the day. She got a contract with Paramount Pictures, but ended up serving as a foil for male actors’ screen tests and playing unremarkable bit parts. 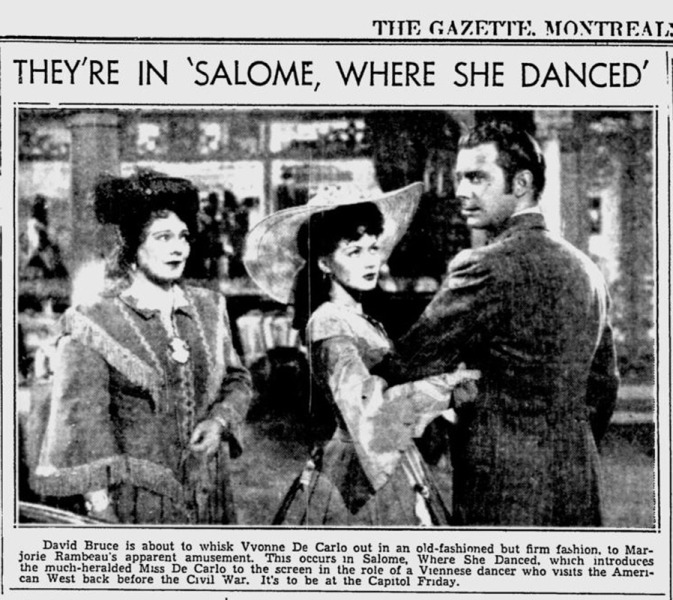 When the contract expired, she got her big break – the lead role in Universal Pictures’ 1945 western “Salome, Where She Danced.” A New York Times film critic remarked that she had “all the ‘looks’ one girl could ask for,” adding “she dances with a sensuousness which must have caused the Hays office some anguish.”

The Hays Code he refers to determined what was acceptable and unacceptable content for motion pictures, keeping out material the group deemed inappropriate for viewers.

De Carlo recalled her big entrance in the film.

“I came through these beaded curtains, wearing a Japanese kimono and a Japanese headpiece, and then performed a Siamese dance,” she said.

“Nobody seemed to know quite why.” 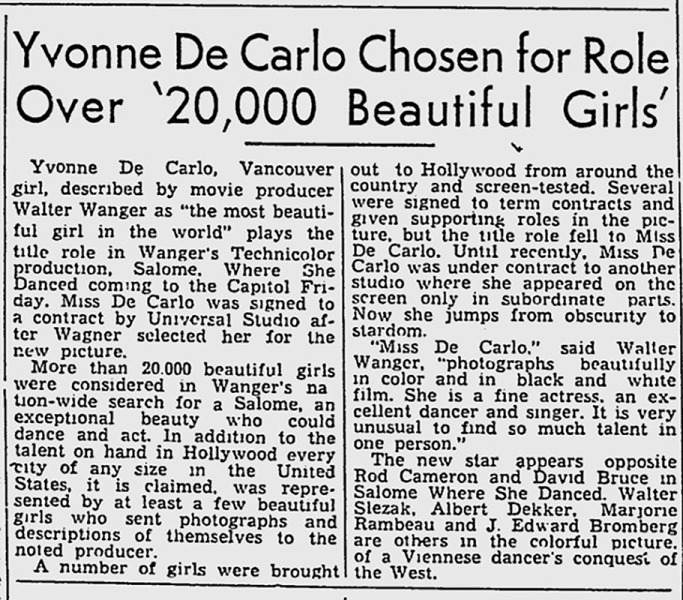 The studio had undergone a nation-wide search for the perfect girl to play the part of Salome, claiming they considered more than 20,000 girls. The chosen actress had to be beautiful as well as talented in song and dance. When De Carlo was chosen, she was dubbed the, “most beautiful girl in the world,” by American film producer Walter Wanger. She was an unstoppable force.

De Carlo went on to star in numerous films, often playing an exotic beauty in westerns or donning a harem dress for “sex-and-sand” films such as 1947’s “Slave Girl” and 1948’s “Casbah.”

Her career later took a more serious turn with what turned out to be one of her most memorable roles. She played Moses’ wife Sephora alongside Charlton Heston in Cecil B. DeMille’s “The Ten Commandments” in 1956. 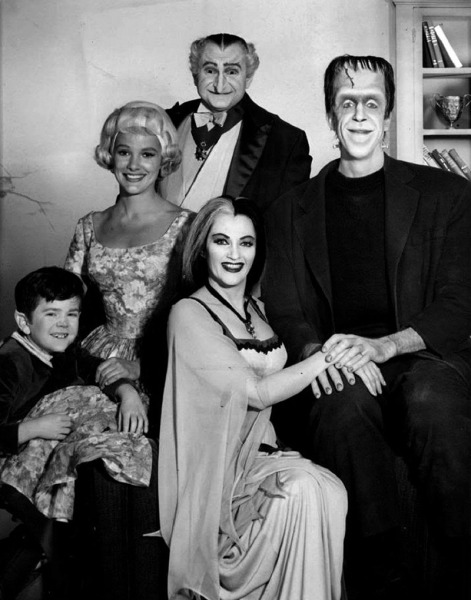 By 1964, De Carlo’s popularity was fading. Engaged four times, she married only once. Her stuntman husband, Robert Morgan (whom she later divorced), had been seriously injured on-set and the aging starlet was broke. She took a chance on an unusual T.V. role, playing a campy vampire on sitcom The Munsters.

The show, despite only having a two-year run, found a second life in syndication. De Carlo’s gothic Donna Reed role on the show gave her the chance to revamp her image – this time as a mistress of darkness who also happened to be a loving wife and mother to a family of loveable monstrous misfits.

“It meant security,” she said.

“It gave me a new, young audience I wouldn’t have had otherwise. It made me ‘hot’ again, which I wasn’t for a while.”

Following The Munsters, De Carlo later made yet another comeback – this time on Broadway, starring in Stephen Sondheim and James Goldman’s Follies in 1971. 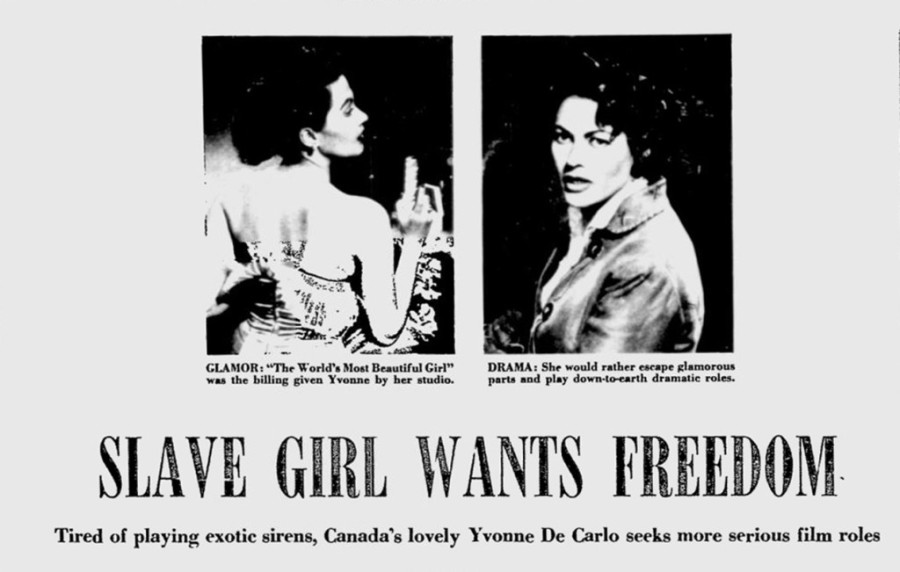 In 1987, she co-authored a tell-all autobiography in which she claimed no fewer than two dozen famous lovers, including the likes of Howard Hughes, Burt Lancaster, Billy Wilder, Robert Taylor, Robert Stack, Prince Abdorezza Pahlavi of Iran, Prince Aly Khan and others.

The reviewer added some wry comments of his own on the book’s content.

“According to the book, she soared with enough men to qualify as an honorary test pilot for Sealy Posturepedic,” he wrote.

“DeCarlo [sic] names 24 of her flingees. That averages out to a new lover every 11 pages or so.” 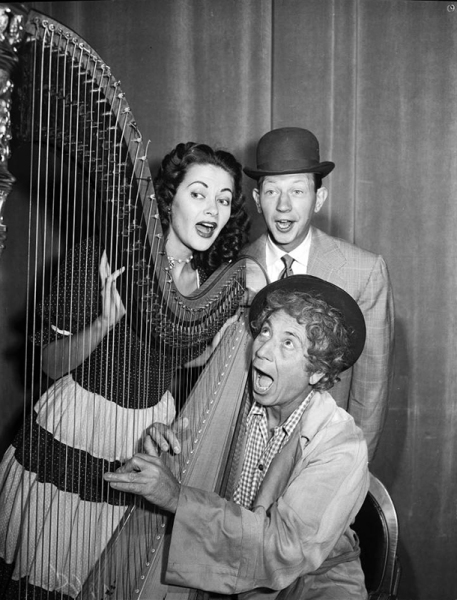 But De Carlo did more than simply list her paramours, she also peppered the pages with solicitous details. The same review gave readers a taste of the scandal contained within its pages.

“The book goes into a fair amount of detail over her past flings: Hughes was an expert lover but had toenails that wrapped almost completely around his toes. Lancaster made love to her on a mink coat in her back yard. The shah of Iran was fixed up with one of her best friends while she dated his brother, the prince.”

It’s the kind of thing that simply can’t be made up.

Tickets are $22, available online on the Forbidden Vancouver website. Tickets sell out quickly, so buy yours today.