Young residents of Metro Vancouver head back to school this week, whether that be high school or a post-secondary institution, and for many it involves using public transit.

We present to you some transit tips and tricks for ‘Back to School’ week.

TransLink has this neat little tool called the Next Bus on its mobile website that offers customers real-time transit information.

Using satellite tracking on buses, mobile Next Bus gives you real-time transit information by estimating when the next vehicle will depart, based on its last reported location. Use Next Bus to find out when the next bus is coming, look up bus routes and bus stops, see bus route paths or find the closest stop to your current location. Mark routes or stops as favourites for fast access next time you’re heading out the door.

Since Next Bus is real-time, it will offer much more accurate information than the schedule booklets or what is posted on the pole of the bus stop. It updates every couple of minutes with estimated arrival times based on traffic conditions.

It will make your wait much more bearable knowing where the bus is and when it will arrive exactly. You can sit down at the bus shelter and relax without worrying about it bustling past you. Maybe even run across the street to grab a bite to eat.

The 99 B-Line is an articulated, express bus service with a frequency of 1.5 minutes during peak hours, but it isn’t always the fastest way to travel to UBC.

If you’re travelling to UBC using the Millennium Line, instead of transferring to the 99 B-Line at Commercial-Broadway Station, transfer to the 84 UBC at VCC-Clark Station. It’s actually the fastest way to get from the Expo/Millennium Line to UBC. 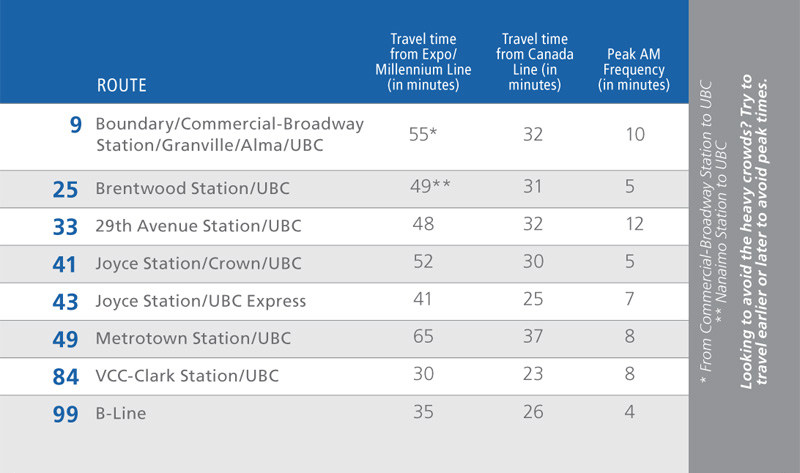 3. Seat Camp on the SkyTrain

SkyTrain cars leaving downtown Vancouver are packed during rush hour and the chances of securing a seat are very low.

Consider boarding the inbound train to Waterfront and staying on board as it becomes an outbound train at Waterfront to either King George, VCC-Clark, or Richmond-Brighouse Station.

This will pretty much guarantee you a seat on the SkyTrain.

Also, since most of the exits are located near the centre, the middle two cars are usually the fullest while the front and end cars are the emptiest. Try boarding the front or end car.

4. Know where the SkyTrain Station exit Is

Since SkyTrain is automated, the train will stop at the same location each time it stops at a particular station. Board the correct SkyTrain car and improve your chances of making the bus connection.

For example, always board the second car on the Millennium Line from VCC-Clark to Production Way-University Station. The first door will stop right in front of the station’s exit to the bus loop below. You will beat the bottleneck that forms and increase your chances of finding a seat on the 145 SFU.

5. Getting passed up? Walk to the previous stop

Pass-ups are a regular occurrence and it can be especially frustrating at times during peak hours.

Walk to the previous stop to increase your chances of boarding the bus. Drivers are more likely to stop and pick you up if he or she sees you are the only one at the stop.

6. Crowded bus? Wait for the next one

When buses are bunched together, your instinct might be to get on the very first bus you see. Resist the urge and get on the next one. The fuller the bus, the more stops it will need to make to drop off passengers along the way.

If it is a trolley bus, always board the first one because they cannot pass each other.

TransLink’s Trip Planner tool is great, but it doesn’t factor in walking time. Google Maps includes walking time and allows you to be much more precise with your arrival and departure times.