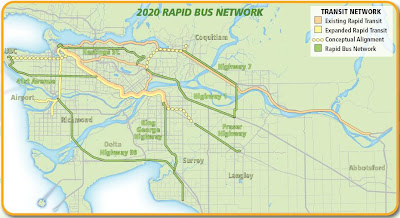 Click on the above link to get a better idea as to what rapid transit will look like in Metro Vancouver in 2020. In a previous post, I highlighted the population density of the region and the case it makes for SkyTrain to UBC (check out the excellent discussion in the comments here) over any expansion in Surrey. Next, I’m looking at employment.
Population density is just one of many factors that needs to be studied when evaluating rapid transit needs. One must also look at employment density. Currently there are 400,000+ jobs in Vancouver and roughly 150,000 in Surrey. The Vancouver figures don’t include the 26,000 jobs at Vancouver International Airport and the  approximate 10,000 + jobs in the UBC area. Both of which are a stones throw away from Vancouver proper.
Now we all know that Surrey is to one day become an employment hub for the people living south of the Fraser, however, even by the year 2040, Surrey will still only have about 275,000 jobs in the entire region. Currently, many of Surrey’s jobs are in transit unfriendly industrial parks. Chalk that up to poor planning, however, one must realize that high paying jobs tend to be located in Downtown Vancouver or the Broadway Corridor and not Surrey, thus the demand for offices is and will always be lower in the burbs (current office vacancy rates range in the 15 to 20% range for Surrey, 5% for Vancouver).
Furthermore, some 40,000 people work along the Broadway corridor, the provinces second largest employment centre, behind downtown Vancouver and more office space is being planned for Broadway. This just further reiterates my point that although rapid transit extension would be a nice gesture to our suburban friends, it would be stupid move and TransLink knows that. Too bad politics gets in the way.
So if we were to look to the map above, I would say stick a rapid bus network expansion for Surrey until it reaches a critical mass and focus on UBC and Evergreen line in the next 10 years.
More on this topic later…
VancityBuzz.com
ADVERTISEMENT
ADVERTISEMENT
ADVERTISEMENT