Now in its 28th year, Vancouver TheatreSports League Presents: The Massacre is an annual Valentine to comedy lovers in the city. Taking place at The Improv Centre on Granville Island until February 14, this yearly event boasts a bevy of quick-witted talent from around the world. Competing for the top prize of bragging rights, they’ve gathered to murder us – and each other – with their jokes.

The event’s first two weeks features a round robin tournament of local improvisers. Points awarded by random audience members are cumulated throughout the show and give each team of players a little extra incentive to stay on their toes. Following the local bloodbath, the event’s final week finds the stage taken over by teams from Florida, Texas, Georgia, and Bellingham, Washington.

If The Massacre’s opening show is any indication, the event is going to make for a hilarious few weeks. The dueling teams on stage, Team Wizard Beard and Team Cirque Do So Lazy, started the evening off by pairing up with each other for a mixed team performance. The frenemies then split back to their respective divisions before putting their battle faces on.

Host Daniel Chai kept things moving between bits and showcased an easy repartee with the performers and the audience. Bringing someone from the crowd is always a risky venture but the volunteers for the night were solid, good-natured sports. They were incorporated well into the show, and extra props must be given to the brave woman who allowed her private text messages to be read aloud in one scene. 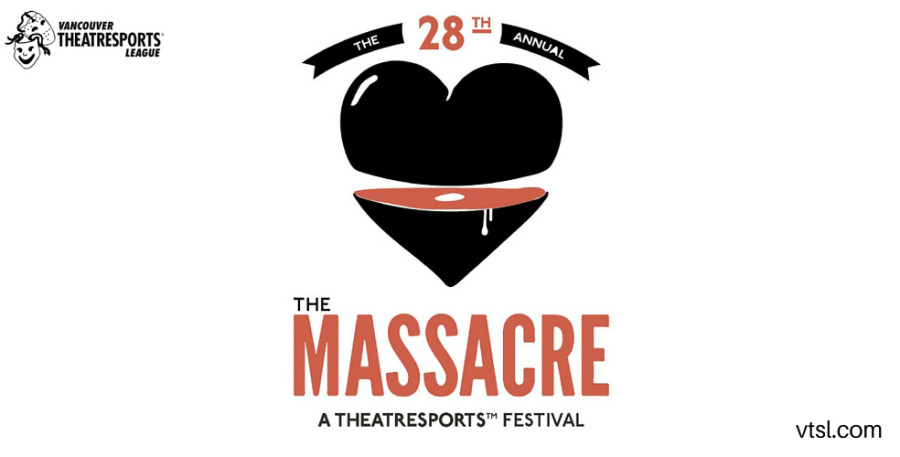 Other than one notable exception early on involving broken leg and an intimate object, the humor of the night didn’t turn blue. The Improv Centre is a welcoming environment and the jokes remained free of the meanness that seems to easily sneak into comedy these days. This fact alone makes The Massacre an attractive option for visitors and local residents alike. The performers were all diverse enough to keep each moment unpredictable, and the competitive spirit remained in good nature throughout. Sure, the points ‘matter’ but when everyone’s having this much fun we’re all winners.

VTSL’s The Massacre started on January 27 and will be running up until Valentine’s Day. Admission starts as low as $10 (for students and seniors) or $15 for adults. Advance tickets are available online at vtsl.com and in person at The Improv Centre’s box office.

For more details and to get tickets, visit VTSL’s website.