A Vancouver teenager’s painful rejection after telling his father he is gay is making its rounds on social media.

The post on his Tumblr account, a screenshot of his dad’s text messages, has been shared about 2,000 times. It was first posted on the site about three months ago, but it did not go viral until recent weeks.

“You embarrass me from all the people I knew,” wrote his dad. “I’m going to puke. People will ridicule me, insult me, and I might turn out to be criminal.”

According to CKNW, the boy is a 15-year-old and there is some good news: he is receiving some support from his mother and sisters. Other bloggers and his school counsellor have also reached out to him for support.

It appears the teenager’s parents originated from the Philippines and are religious.

The dad’s messages in full:

Take out your post from the social media. You embarrass me from all the people I knew. I’m going to puke. Whatever you do it reflects on me. People will ridicule me, insult me, and I might turn out to be a criminal. I have enough of all this bullshit.

You are trying to ruin me. This is worst than death.

We took care of you since you were a baby. We loved you, took care of you when you’re sick. Lost many days and nights in all your fifteen years. Note this is what we get in return, shame and embarrassment. You just didn’t realize that at all.

If only you didn’t reject God and His teachings in your life you could have been strong enough to stay from evil and scums that surrounds you. 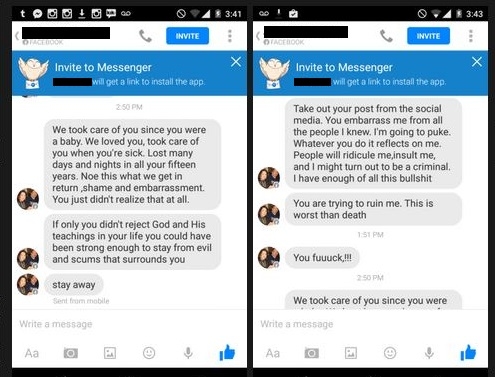 The process with coming out to parents and family is always a very difficult experience. Furthermore, the influence of a parent’s rejection can lead to immense psychological distress.

In other cases, many youth postpone their coming to parents until their adult years, fearing rejection that includes extremes such as homelessness. In a recent study by the B.C. Poverty Reduction Coalition, it is estimated that as many as 30 per cent of the province’s homeless youth identify as queer or transgender.

Need someone to talk to?