Over three-quarters of Vancouverites are in favour of an absentee homeowner tax, according to an Insights West poll.

The online survey conducted in May polled the idea of an absentee homeowner tax to curb the market for foreign real estate investment in B.C. An impressive 73 per cent of British Columbians were in favour of the tax, with the majority of support coming from Metro Vancouver residents, voting 77 per cent in favour.

The support was also the strongest for those aged 18 to 34, and surprisingly, for those in the highest annual household income bracket.

But disapproval, though small, was present in several demographics. Of East Asian residents, 35 per cent believed the debate on foreign ownership is racist, while overall 21 per cent of British Columbians thought that way.

Almost everyone agreed that absentee owners, people who own homes but leave them empty, damage community. Overall, 86 per cent of people believed these owners are speculators and not part of the community. In the highest income bracket, that number jumped to 92 per cent.

“Homeowners actually see some benefits from foreign ownership when it comes to the possibility of an increased value for their property,” says Mario Canseco, Vice President of Public Affairs at Insights West. “Still, many residents are voicing dissatisfaction with the fact that these empty homes are having a negative effect on their community.”

Mayor Gregor Robertson is one of those who believe a tax is needed. In a statement last week, Robertson called on the provincial government to take direct action on the region’s unattainable housing market.

“Vancouver needs the B.C. Government to take action on creating a speculation tax and recognize that we need a fair and level playing field to make housing more affordable for residents in Vancouver, and throughout the province.”

The Mayors’ Office’s new policy announcement came just a week after Premier Christy Clark stated she would not entertain the idea of a tax on foreign real estate investors as she is concerned that “housing prices will drop.”

“That’s good for first-time home buyers but not for anybody who is depending on the equity in their home to maybe get a loan or use that to finance some other projects,” Clark said in May. 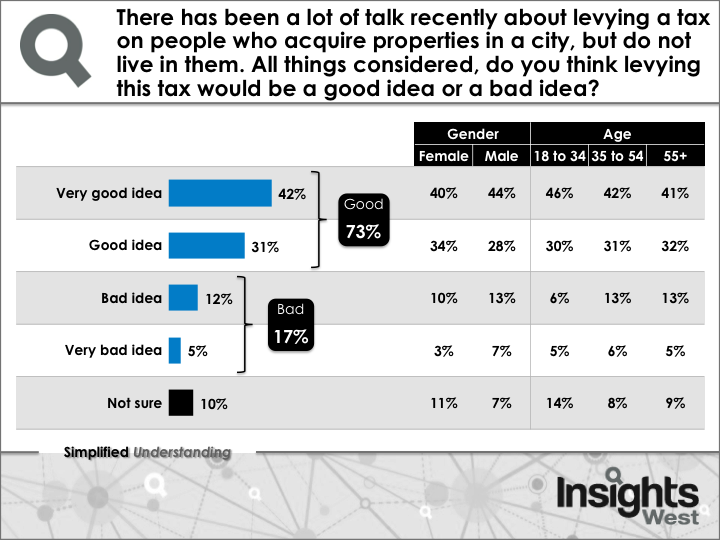