If you were in or around downtown Vancouver during the post-Christmas weekend, you might’ve seen some ruckus about at BC Place with loud music, a dazzling light show and thousands of revellers gathering around the world renowned stadium. If you were lucky enough, you might’ve even been one of those revellers yourself, in attendance at Contact Festival – Western Canada’s largest indoor music festival and electronic dance music event put on by Blueprint Events and Live Nation, this year headlined by superstar DJs Armin van Buuren and Zedd with a supporting cast of over 15 A-list DJs.

Last year we made note of the fact that Contact managed to set the all time record for social media traffic  in the span of 48 hours within the city of Vancouver, dwarfing the likes of the annual Celebration of Light, among other large events. With the increasing popularity and mainstream appeal of dance music amongst millennials, it’s really no surprise this is the case. Recently entering into its third year, we wanted to check in and see how they did in comparison to last year so we reached out to the head of Blueprint’s Digital Marketing division, Matthew Owchar, to take a look at some of the numbers. Once again, the results were nothing short of astounding!

“Our digital strategy this year placed emphasis on some key mobile native platforms like Instagram & Snapchat that are most popular among that coveted 18 to 24 millennial group so we could capitalize on festival goers that were perpetually capturing & uploading content on the fly.

The hashtag for the event itself “#Contact2014” was central to the promotion of the event and is fundamentally a part of the brand’s DNA, so we were consistent to the point of being aggressive in promoting it in the lead up to event & at the event itself. In addition to using our social media channels to promote it, we designed an app for both iPhone & Android that acted as a direct line of communication from us to the festival goers and saw tremendous success with that, with nearly 50% of attendees downloading and utilizing the app.

Additionally, we were able to utilize the building’s production features (the ringboard & jumbotron) to imprint the hashtag on people’s minds throughout each day.” 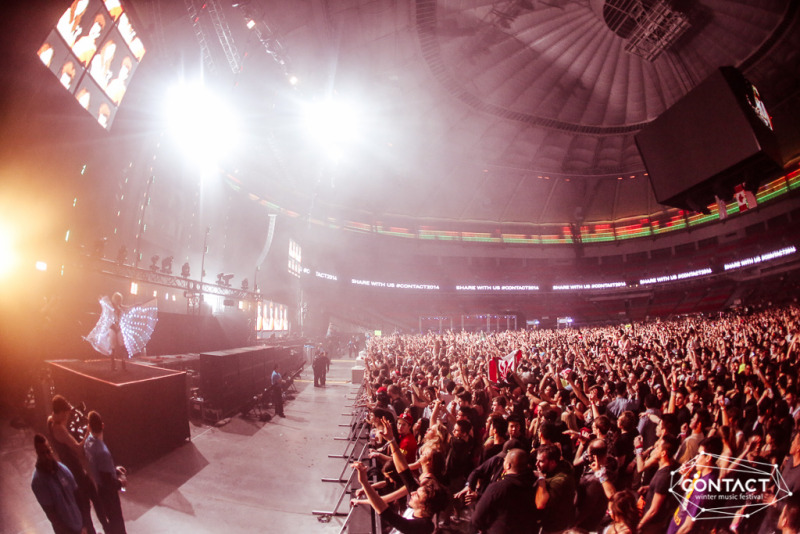 Similar to Contact2013, Blueprint Events’ social media team monitored and responded to over 80 per cent of the festival’s most frequently used hashtags across Instagram and Twitter over the span of the two day festival. A numbers breakdown:

So basically, on Instagram ALONE, Contact2014 DOUBLED the amount of content produced within the two day span of the festival, absolutely demolishing the record set last year. Considering the Blueprint team also interacted with upwards of 80 per cent of this year’s content, that’s a level of engagement that also nearly doubles what was accomplished the prior year.

Contact2014’s inclusion of Snapchat also saw a tremendous amount of success, with Blueprint posting two Snap stories consisting of over 70 snaps that racked up over 75,000 views in the span of the two days. Considering the mostly unexplored potential of the platform by brands, this is unquestionably an impressive figure.

So there you have it – the evolution of social media from one festival year to another. What lessons can companies take away from the successes of Contact Festival this year? “Our success this year had to do with building on the successes of last year, seeking ways to improve and amplify them and also looking towards what’s next – ALWAYS,” remarked Owchar. “Social media has no rule book, despite how many people say they are “experts” – it’s all about knowing your own consumer base intimately by studying their habits closely and responding to the shifting trends, because as you can see, they can shift dramatically in as little as one year.”