Lower Mainlanders often complain about our inadequate road infrastructure. Today the complainers will be vindicated as the TomTom Congestion index revealed that Vancouver is the second most congested city in North America, behind only car crazed Los Angeles. The report covers 26 major cities in North America.  The average trip times in Vancouver take 30% longer when there is no traffic and 65% longer during the weekly evening rush hour. This has got to change.

Now, after looking at the congestion levels, one has to question why the City wants to tear down the Georgia and Dunsmuir Viaducts.  The City has come up with a conceptual plan that will reclaim the land surrounding the viaducts and convert most of it into a public park with a beach at False Creek. Aesthetically, the plan is appealing, however, it will have an adverse impact on traffic. The plan to tear down viaducts is even being contested by Strathcona residents. Why the city can’t work around the viaducts and integrate them into the fabric of the neighbourhood is a question that every Vancouverite should be asking.

What is the Solution?

Naturally building more roads is not the answer, just look at highway king Los Angeles. The key is to have an all inclusive transportation plan for the region and not just Vancouver. That being said, when it comes to mega transportation projects, Vancouver should be the regions priority. It is the financial, employment, educational, cultural and social hub of the region. If transportation (roads, transit etc..) into the city was improved but remained the same within city limits, all you will be doing is creating further congestion as the city will not be able to handle the additional capacity. Build more rapid transit in Vancouver and more LRT south of the Fraser.

The truth is Vancouver started to build its rapid transit network at a late stage in the city’s development and now it’s playing catch-up and the funding for such projects just isn’t there. Our transit system is good, but it can be better and definitely cover more of the city.

Increasing density around transit nodes is another real solution to the congestion problem. To encourage users to take transit it has to be accessible and fast. Buses just don’t cut it and extra density should be allowed all rapid transit stations.

Implementing policies that improve density and rapid transit is the only way Vancouver will be able to get out of this traffic nightmare.

Here is some data pulled from the report. 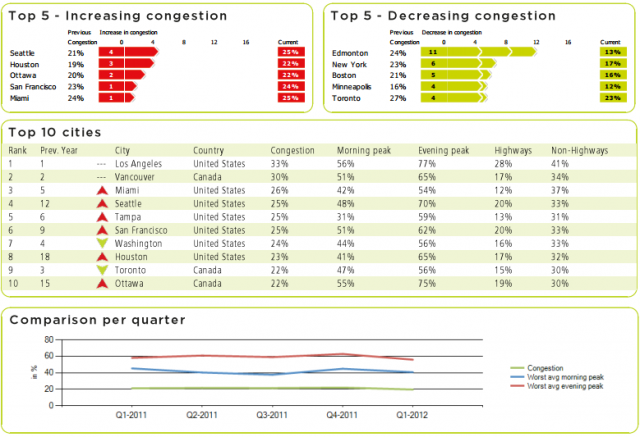