“The study provides an effective approach for international comparisons based on the tax results of different business scenarios,” said Elio Luongo, Canadian Managing Partner, Tax, KPMG in Canada. “Canada continues to offer a very competitive tax structure, which is crucial to attracting inbound investment, spurring innovation, and creating skilled jobs that support our families and communities in Canada.”

All Canadian cities were elevated in the rankings as a direct result of digital media incentives. Toronto had the lowest in that tax category and it helps to explain why a lot of gaming companies are relocating in and around the Greater Toronto Area. 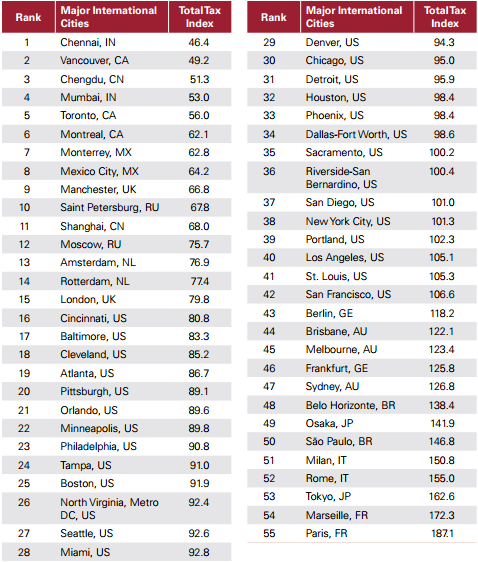 Digital
Canada ranks first for digital operations, well ahead of India and with the lowest TTI, primarily due to targeted incentives that provide significant financial support to digital media industries. Toronto (7.9), Montréal (25.2), andVancouver (34.5) take the top three spots, respectively, for tax competitiveness in the digital sector among the 55 major international cities studied. These three cities all exhibit very low TTIs due to the impact of digital media incentives offered by the relevant Canadian provinces.

R&D
TTI rankings of countries for R&D operations vary significantly from other sectors and overall results, primarily due to the impact of tax incentives targeted to foster R&D activity. Canada (29.0) ranks first, with India (47.0), Netherlands(57.8), United Kingdom (63.2), and Russia (63.9) following, all with particularly low TTI ratings that reflect the effects of significant R&D incentives in those countries. Montréal (20.3), Vancouver (32.9), and Toronto (37.6) take the top three spots, respectively, for tax competitiveness in the R&D sector among the 55 major international cities studied.

In March 2012, subsequent to the completion of research and analysis for this report, the Government of Canadaannounced reductions to its R&D tax credit programs to commence in 2014. For operations that are highly R&D intensive, such as the dedicated R&D facilities examined in the R&D sector of this study, it is common for operations to earn more R&D credits than they are able to use (due to low taxable income, if any). Therefore, the reduction in Canadian federal R&D tax credits announced in the March budget is not expected to have a notable impact on Canada’s rankings for the R&D sector in future editions of this study. However, for other types of operations with a lower intensity of R&D (such as a manufacturer who also conducts some ongoing R&D), the recent federal changes may increase their tax burden and impact Canada’s rankings in future editions of this study.

Corporate services
Consistent with the overall results, India (50.0) also has the lowest TTI ranking for corporate services while Italy(186.2) and France (244.2) have the highest TTI ratings. The TTI rankings for these countries are also consistent with their rankings for statutory labour costs, illustrating the significance of this cost category to services firms where labour represents the predominant business cost factor. Canada (68.1) sees higher TTI scores in this sector and as such, its ranking slips to fourth.

Manufacturing
Canada and Russia both move down in the rankings for manufacturing, with Canada (69.8) ranking fourth behind India(49.3), China (51.2) and Mexico (60.0), while Russia (77.6) ranks seventh also behind the United Kingdom (74.4) and the Netherlands (76.8). In both Canada and Russia, higher costs for other corporate taxes, particularly property taxes, have a significant impact on the manufacturing sector.

In Canada, a lesser significance of incentives in this sector, relative to digital and R&D, also results in a higher income tax burden for the manufacturing sector – however, Vancouver (53.0) represents an exception, ranking ahead ofMumbai (53.2), Shanghai (58.7), Monterrey (59.4) and Mexico City (60.6), even though Canada ranks behind each ofIndia, China, and Mexico in the national results.