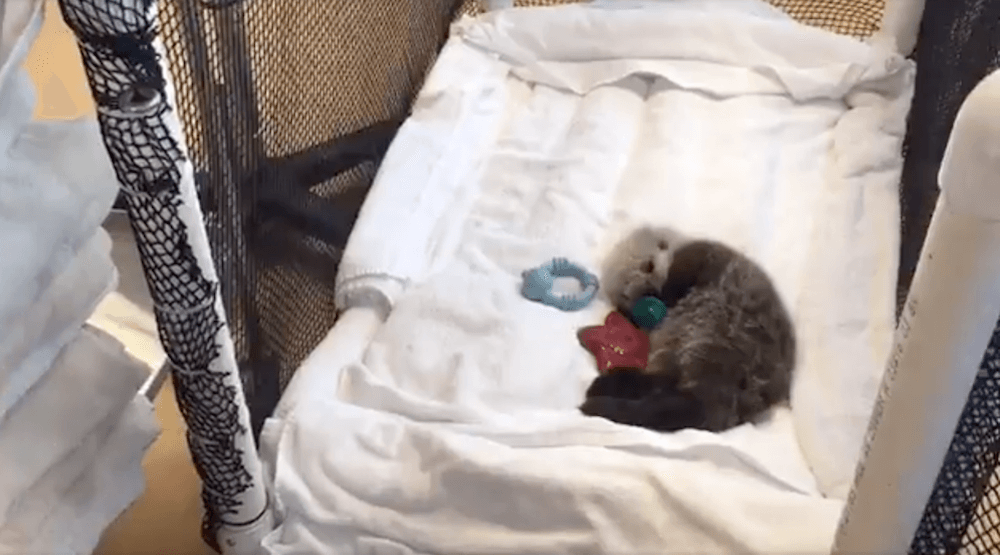 Screenshot of video from Vancouver Aquarium/Facebook

The baby sea otter that was rescued and brought to the aquarium’s Marine Mammal Rescue Centre last week has had a sleepy check up.

The fluffy sea otter was found off Northern Vancouver Island alone and distressed, and has since found a home in Vancouver.

The yet-unnamed sea otter pup can be seen in a video released by the Vancouver Aquarium as he gets a quick check up by Dr. Barb Linnehan.

The pup is in good health, according to Vancouver Aquarium Communications Manager Deana Lancaster, but where he will be heading after his time at the Rescue Centre is uncertain.

“We don’t yet know what his future holds,” Lancaster said in an email to Daily Hive.

“The decision about whether he can be released will be made by Fisheries and Oceans Canada. The pup is currently at our Marine Mammal Rescue Centre, which is off site from the main Aquarium, but it is possible that he will be moved to the Aquarium soon for his continued care because we have better nursery facilities here.”

It may be possible to see the pup in person down the line if he is kept at the aquarium, but until then the adorable pictures and video will simply have to suffice.

If you see a stranded marine mammal, do not approach it and keep pets away. Call the centre at 604.258.SEAL (7325) for immediate help.

Our newest baby otter #RescueCentre patient is irresistibly adorable there’s no denying it! But, as cute as he may be, we’d like to remind the public that distressed animals should be reported first rather than taken from the ocean. Once they’re removed from the wild it’s impossible to determine if the mother is alive and if they could have been reunited, or if bringing them in was the appropriate action. • • • What to do if you see what appears to be a stranded marine mammal: Do not approach it and keep pets away. Call our Rescue Centre at 604.258.SEAL (7325). Do not move the animal unless instructed to do so.

CUTE ALERT: A tiny male sea otter pup — estimated to be just two to four weeks old — is now in 24-hour care at the Vancouver Aquarium Marine Mammal Rescue Centre, after concerned members of the public found it swimming alone in open water off northern Vancouver Island on Sunday. Although the pup appears healthy, he requires care night and day from the Rescue Centre team, just as he would from his mother. Staff and volunteers are spending shifts feeding, bathing and grooming the newborn pup, which has not yet been named. • • • #cutealert #cutest #babyotter #rescuedotter #marinemammal #marinemammalrescue #vammrc #mmrc #careteam #wildanimal #babyanimals #vancouver #porthardy #weeksold #fluffy #yvr #westcoast #bccoast #bc #pacificcoast #picoftheday #news #vidoftheday