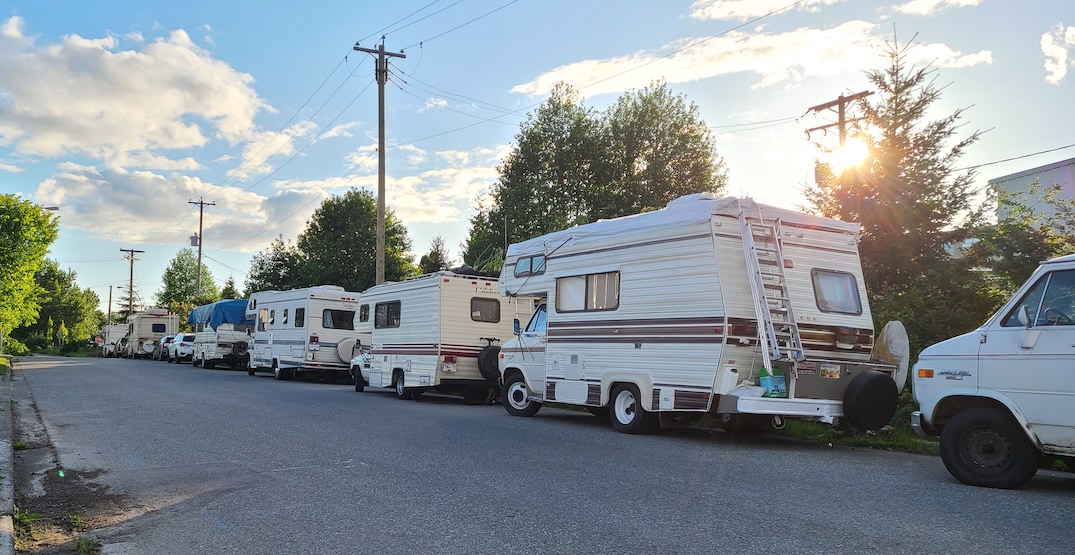 Over the past year, tented encampments have been the centre of attention of Vancouver’s homelessness crisis, but with the recent end to the Strathcona Park encampment, some of that focus now appears to be turning to ending RV encampments.

The City of Vancouver states it will begin enforcing policies that restrict illegally parked RVs over the coming days, specifically the cluster of about two dozen vehicles along Slocan Street between Grandview Highway and East Broadway — a street wedged by Vancouver Technical Secondary School and Lowe’s Home Improvement, near SkyTrain’s Renfrew Station.

There has been a spike in the size and number of RV clusters on local streets since the pandemic began, growing to about seven areas, mainly in the Eastside.

In an email to Daily Hive Urbanized, the municipal government states it has been monitoring these clusters for more than half a year to manage the negative impact and address complaints from residents, businesses, and the high school from the accumulation of garbage, debris, noise, and human waste.

Before the pandemic, the city would typically follow a two-step warning process for illegally parked RVs, with enforcement beginning with warning notices and educating the owners and occupants about the city’s parking policies.

Overnight parking of large vehicles such as RVs is not permitted on any public street.

The city states that parking enforcement staff have been in the Slocan Street area educating RV owners and occupants due to the proximity of the school and the neighbourhood concerns.

“Initially we observed some RVs leave the area as a result of these warnings, however the numbers have increased once again,” states the city in an email.

“For those remaining RVs, Homelessness Services Outreach staff have been on site as a precursor to issuing parking tickets and towing if applicable over the next two weeks. This multi-step warning system has had success with some people, allowing them to make alternate arrangements for their vehicle and/or engage in homeless services.”

After the vehicles on Slocan Street have been moved, city crews will remove any remaining garbage from public property. The municipality is also offering a free tow to a legal off-street location of the occupant’s choosing, as long as it is within the Lower Mainland, and up to 30 days free storage at the impound yard.

The city emphasizes that not everyone living in parked RVs considers themselves homeless or at risk of being homeless.

There are plans to conduct a similar decampment process in other areas with large RV clusters.

One other particularly sizeable cluster of RVs can be found nearby on Cornett Road between Bentall Street and Skeena Street, just outside the main entrance into Vancouver Film Studios. There are also RVs parked in the parking lot just north of Playland at Hastings Park.

The municipality states it will only ticket and tow the vehicles when individuals do not communicate with city staff and “where all options have been exhausted.”

Owners and occupants of the RVs at the Slocan Street encampment indicated they would stage a rally today.

While city staff have noted that they are responding to concerns from residents, businesses, and the school, not everyone in the area is against the encampment.

Residents of the Kaslo Gardens Housing Coop, located about a block south of the RV cluster, have asked the city to not evict the occupants from the street, and suggested “short-term fixes” such as providing a dumpster and portable washrooms for sanitation management, and allowing the RVs to park elsewhere. 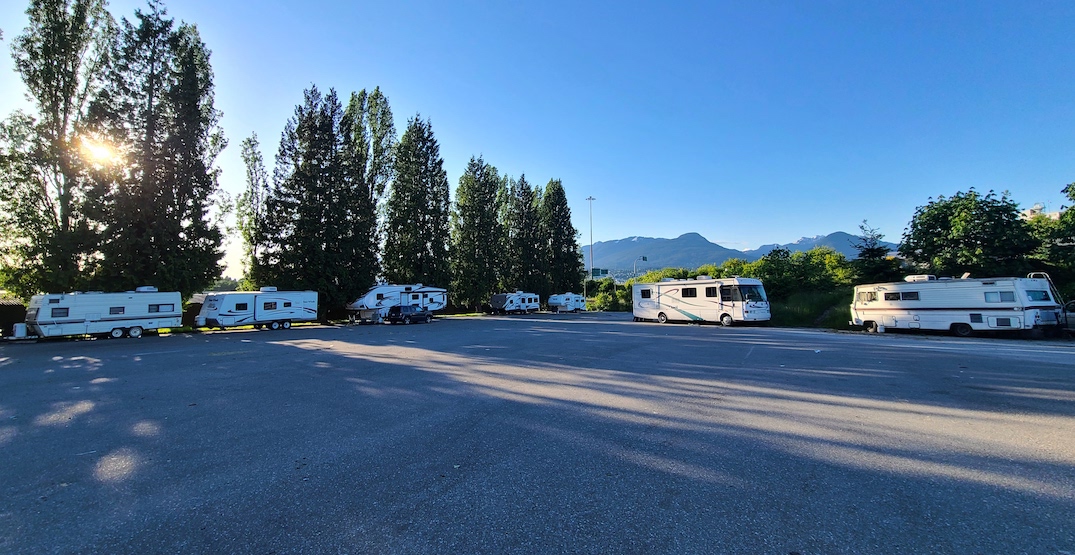 RVs at the parking lot north of Playland at Hastings Park, May 2021. (Kenneth Chan/Daily Hive)