A new survey performed by Environics Research is showing that the majority of British Columbians don’t feel like ridesharing isn’t being introduced fast enough in the province.

The survey was commissioned for Ridesharing Now For BC, a coalition advocating for free-market competition for ridesharing,

600 Vancouver residents participated in the survey between January 11 and January 18. Data was weighted by region, age, and gender to match census data.

Six-in-ten residents surveyed wanted companies like Uber and Lyft to operate within the province as soon as possible. A further two-in-ten wanted them ready for the 2019 holiday season.

When asked about competition between the taxi industry and ridesharing companies, the majority of Vancouver residents (two-in-three) are worried that the government will create some form of rules to protect the taxi industry, making it harder for Uber and Lyft to operate.

Most participants in the survey also believed that British Columbia should model their ridesharing services to be similar to Seattle, Calgary, and Toronto.

And like any other business, rideshare and taxi companies should be allowed to compete on their prices – so long as riders know the fare ahead of time.

When it comes to top priorities for ridesharing, regulated safety standards, upfront prices, and simply just affordability were all highly ranked. 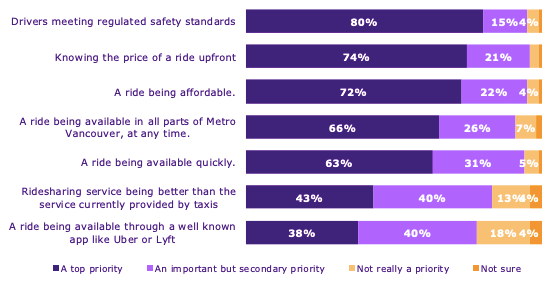 Three-in-four Vancouver residents were also concerned that the BC Government would introduce vehicle caps, which would cap the number of ridesharing vehicles in each region.

There was minimal concern, however, about increased congestion on local roads.

Last November, Claire Trevena, Minister of Transportation and Infrastructure, announced that the provincial government would allow ride-hailing companies to enter the BC market, but not until next year.