Unlike similar events in other cities, Vancouverites like to party. They’ve taken the basics of: Vendors, Gaming, Tournaments, Panels, Costumes, etc. and spiced it up a bit with a licensed venue, some awesome old-school music, live bands, special guests and some gaming themed burlesque.

The Vancouver Retro Gaming Expo, taking place on April 5, will remain a smaller 500-800 person event in the spring, while the larger (modern-themed) Vancouver Gaming Expo has now merged with other conventions into one big summer con known as Northwest Fan Fest to be held at UBC.

The venue is licensed and alcohol will be served, but the event is all-ages. No outside food/drinks permitted. The tentative schedule has been posted and includes:

Tournament – Mario Kart N64
Drinking and driving don’t go together, unless you’re playing Mario Kart. This tournament will bring out the road rage in all of us.

Tournament – Super Smash Bros N64
Bring your A-game, you’re going to need it. One of the most popular fighting series of all time shows it’s roots in what will likely be the most popular tournament of the weekend.

Tournament – Tetris
The original puzzle game straight from Russia, think you have what it takes?

Tournament – Dr. Mario
Mario is not really a Doctor, and if you’ve never played Dr. Mario you’re not really a gamer. One of the puzzle genre’s finest.

Tournament – Bomberman
They’re going to drop the bomb on this tournament, or at least you will drop the bombs in the game. Still undecided on version/system (not 360!) but there will be multiplayer bomberman action. 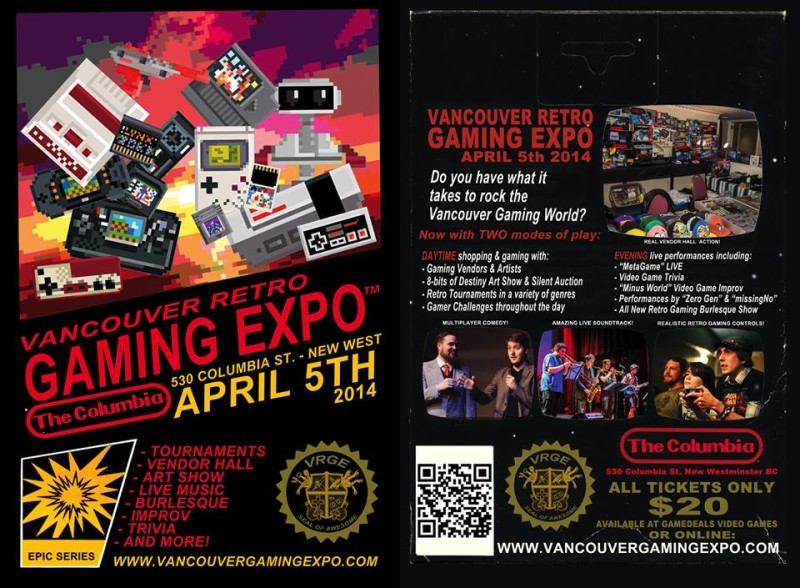 Tickets are now available online at www.vancouvergamingexpo.com/tickets.html or in person at Gamedeals (407 Columbia Street, New Westminster)

PRE-PURCHASE YOUR TICKETS & GET: