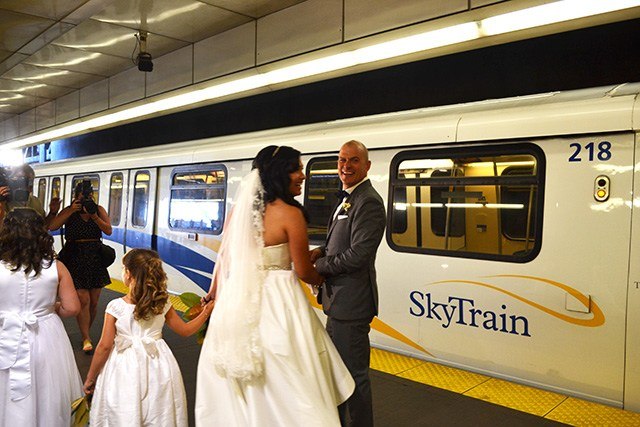 The City of Vancouver’s re:THINK HOUSING submissions saw almost 70 entries come from around the world including the Netherlands, Turkey, the UK, Ireland and Austria to name a few. The competition was started to come up with creative solutions to tackle Vancouver’s growing affordability problem. Similar to their Eastern Core study which ultimately led to the conceptualization of the viaduct removal plans.

The competition was divided into two streams: public land and private land which fall into two categories:

Winners were selected in two streams: by a jury comprised of members of the Mayor’s Task Force on Housing Affordability, as well as by the public through online voting. In just two weeks, 8,000 votes were cast online. 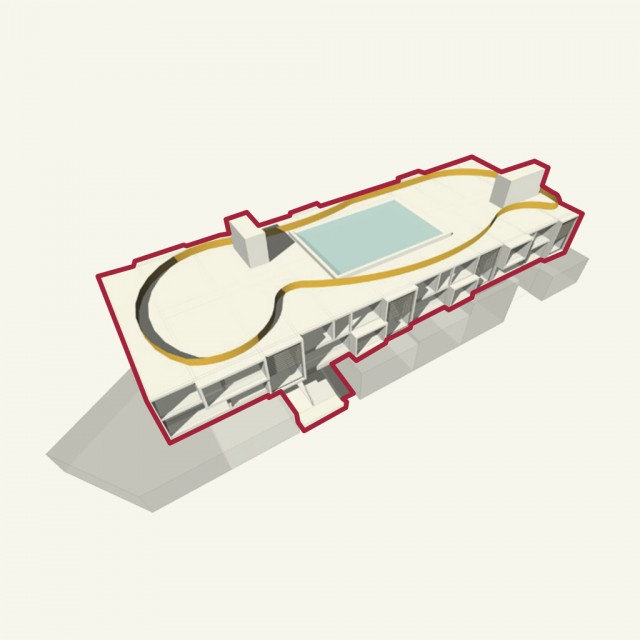 The proposal begins with the assumption that there is value in maintaining a community’s existing urban fabric: that there are economic, social, and cultural benefits that accrue to community members and the city at large when increased density is achieved while simultaneously maintaining already successful communities. 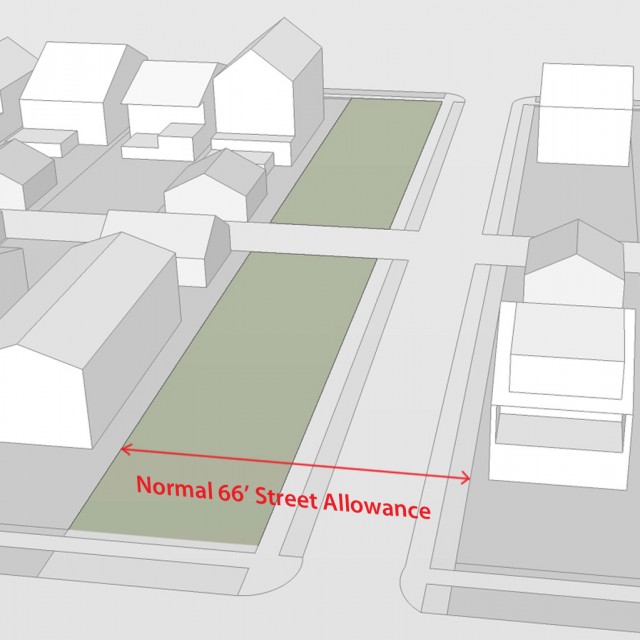 The City has an enormous land resource in the form of underutilized streets. We propose dividing 66’ wide north/south street right-of-ways into equal parts, creating two new 33’ residential lots and a narrower 33’ street right-of-way. The new lots would be developed for afford¬able housing. A conservative estimate is that over 10,000 homes could be created, tapping into over $2 billion in land value. 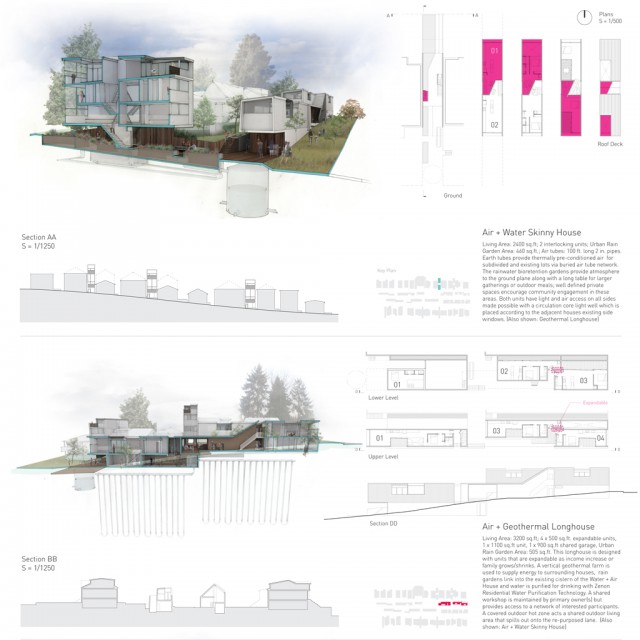 The current model of detached home ownership in residential neighbourhoods, with its dominant program of individualism, investment, and privacy, continues to prohibit the need for integrated affordable housing and has resulted in significant environmental damage. This project considers how local human networks and new models of ownership might contribute to the ecologically responsible city. It proposes community-centered, performance-based lot patterns and housing types, organized around shared energy and resources.

No winner was selected in Building Bold – Private 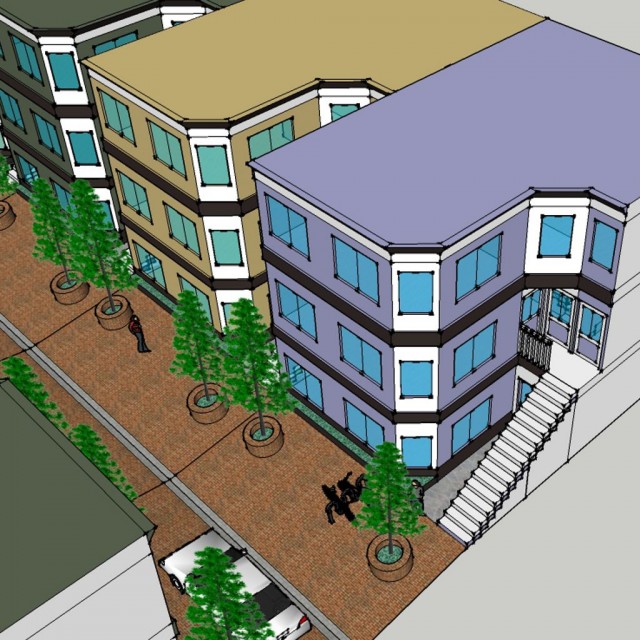 The City of Vancouver can unleash the unused affordable development potential of the existing frequent transit network by allowing small-lot, small-unit, mid-rise development at nodes where two or more frequent transit lines already meet. Without destroying existing neighborhoods, this plan will create new affordable neighborhood centers that put every city resident within walking distance to shops, services, and transport, while simultaneously allowing socioeconomic and social diversity to flourish. 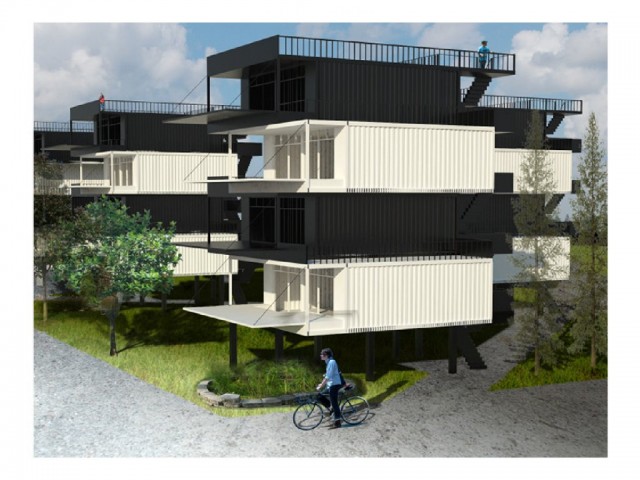 Cargo Park: Recycling shipping containers into affordable residential units that are raised above a ground floor. Within walking distance to valuable amenities and Broadway-City Hall Station, Cargo Park has also allocated space for public bike storage and Zipcars to help connect the community. The centre of Cargo Park is a 24h-bakery that grows food on the green roofs of the residential buildings and from the fruit trees which line the streets.

#70 – Co-Housing With a Twist, from Joanne Lund and Committee

Honourable mentions as selected by the Mayor’s Task Force on Housing Affordability Jury: 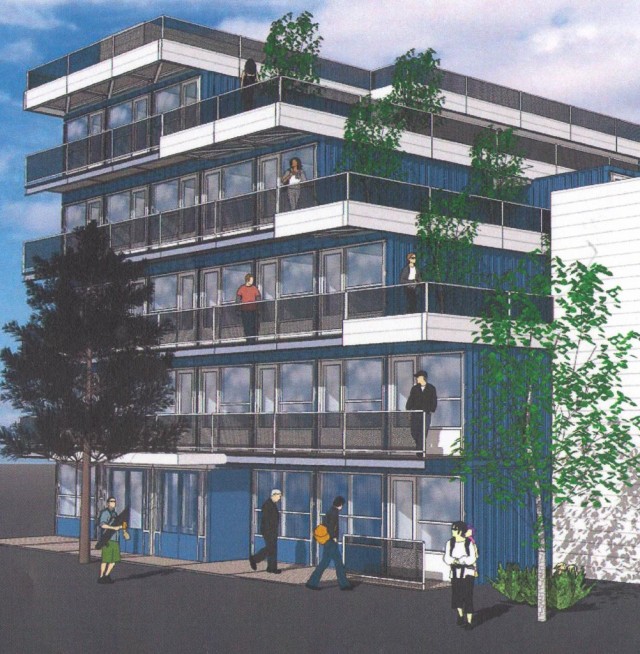 Parcels of land sit vacant waiting for redevelopment throughout the city. A perfect location for semi-permanent housing. CommunityCondos are factory built, erectable in days, are scalable / adjustable (from 9-102+units). In 5-7 years, the condos are demounted and reconfigured at next location with little impact to the land or its intended future use. Designed for single workers or students, CommunityCondos are environmentally conscious, urban-trendy, interiors euro-designed to maximize space.

Looking at the submissions and the winning entries, the only way this city can fill the affordability gap is by cramming more people into what little land we have available. The key to affordable units will be the materials and land costs.