Last month was a particularly tough one for poor ol’ Vancity.

Three stories left Vancouverites incredulous, with our reputation as Canada’s crown jewel tarnished by the news that we’re not only the worst drivers and the worst tippers, but we’re also the most untrustworthy bunch in the country. 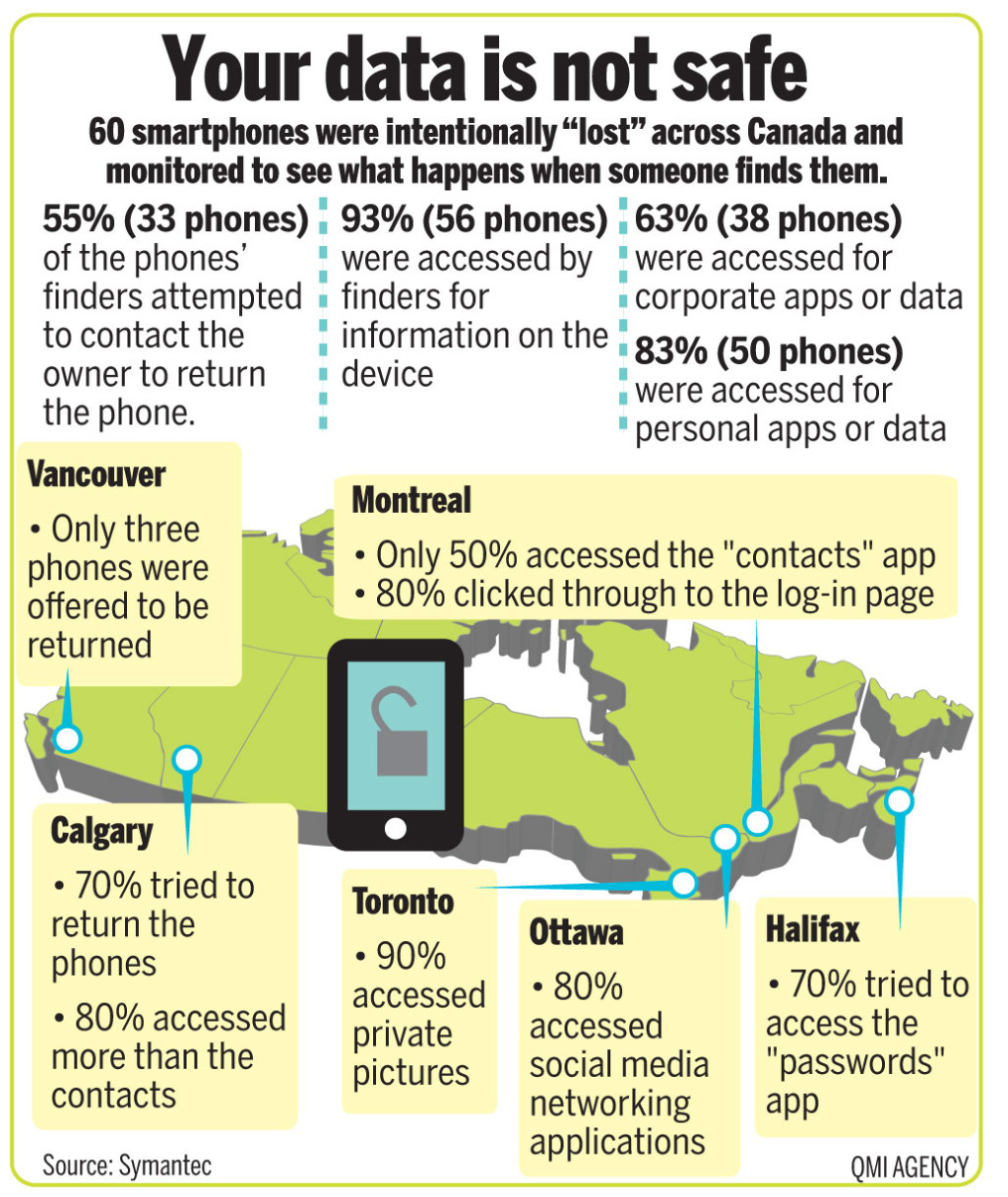 The Honey Stick Project – which found that Vancouver topped the list as least likely to make an attempt to return a lost phone, with only three offers to find the original owner – was perhaps met with the most surprise as the majority of us would like to think we are upright citizens.

Leo Knight, a former Canadian police officer and current Director of Security for the BC Lions and columnist on law and order issues in 24 Hours Vancouver, says that we must not jump to conclusions. “This is only looking at it from one type of product,” he said. “Would the same thing happen if you left a credit card at 50 different stores for example? Or pubs?”

“Smartphones are quickly becoming the target of choice for opportunistic thieves,” he added. “They have a dollar value on the black market for a variety of reasons and the criminal class has recognized this.”

Which may explain why this week a new report shows that the three most resilient cities are all in Canada – with Toronto, Vancouver and Calgary topping the list as the least vulnerable and most adaptive cities in the world – because, as Knight points out, as a young and evolving nation we’re built to deal with these challenges.

He cites Karl Baldauf from NATIONAL Public Relations in Toronto, who is prolific on Twitter and recently tweeted:

@karlbaldauf Accidentally left my iPhone in a cab today. Thank you to the Beck taxi driver for returning it to my office. Good karma, go forth!

With Knight adding; “It’s nice to know that a cab company in the ‘Centre of the Universe’ will do the right thing. Would a cab driver in Vancouver do the same?”

Another bone of contention in the cities war comes from a survey by mobile payment company Square which found that Ottawans are the best tippers, followed by Montreal and Toronto, with the aforementioned resilient Vancouver and Calgary coming in a shameful last.

Marketing Manager Madelynn Festing, who was a server for four years during her studies, was shocked by this news. “When I heard that Vancouverites were pegged as poor tippers, I literally guffawed,” she said.

“I would actually contest that it’s quite the opposite and would question how this study defines ‘Vancouverites’ – i.e. how long do you have to live here to be considered a local? If you’re new to the city, you probably don’t have a great idea of the local customs yet,” she pointed out.

“That being said,” she added, “after working in restaurants for years, I could pretty confidently guess at a customer’s ‘Vancouverness’ by percentage tipped. 15 – 18 per cent? Probably someone born and raised here. 0 – 10 per cent? Probably someone who just moved here or is passing through…or is clueless! An 18 – 25 per cent tip and there is a good chance that the tipper is part of the industry, while 20 – 30 per cent means there’s a good chance those customers were my parents!”

Unfortunately for us, the one issue that few can deny is that Vancouver’s road are littered with bad drivers, as demonstrated recently by YouTube user xSupaD‘s Bad Drivers of Vancouver Series, which has garnered hundreds of thousands of views combined in recent months.

This is not surprising given that in 2012 an Angus Reid poll showed we are the worst drivers in Canada under many categories, but Kurtis Strelau, Regional Education Manager, Young Drivers of Canada, disagrees.

“Those clips could have been made in any city around the world,” he said. “Have you seen the ones from Russia and the Baltic States? Now they’re scary!,” he added.

“Every urban centre has its’ share of bad drivers, it’s just that technology and the media are now allowing us to record more of it for the amusement (and bemusement) of the masses. We, as driving instructors, spend nine to 11 hours a day on local roads and, personally, I see a lot,” he said.

“It can be frustrating to be surrounded by such negative reinforcement when trying to impress upon our students the importance of safe driving practices. Errors such as rolling stops, failing to signal turns or lane changes, running amber or red lights are inured to them, so they come to see them as acceptable practice,” he pointed out, “probably because even Mom or Dad do it too!”

“We have to remember that we have the advantage of hindsight,” he added, “which is always 20/20! These aren’t bad people – they are, for the most part, good people making bad decisions.”

“There will always be the aggressive Type A personalities who don’t care and are of the mind that the rules of the road don’t apply to them,” he said. “However, from a statistical viewpoint, 43.7% of all fatalities occur to people who were not legally at fault – in other words, they were doing nothing wrong from a legal standpoint.”

“We at Young Drivers of Canada are more interested in “moral” fault,” he pointed out. “We believe that in any collision situation, all of the drivers involved are, to some degree, at fault. For example, if a driver starts up on a fresh green light and gets T-boned by a vehicle running the red light, the green light really means ‘proceed when safe to do so’ and, therefore, technically the former could be found partially at fault. 66% of all intersection crashes happen in the first second and a half of the light changing.”

He believes the multicultural nature of our city could be a factor. “Many new Canadians come from countries where driving is a comparatively ‘new’ thing,” he said. “Only recently, in countries such as India and China, have automobiles become affordable and not just a luxury for the rich and privileged few.”

“For obvious reasons,” he added, “the infrastructure to handle this massive increase in (cheaply-made) automobiles competing for space, with bicycles, busses, trucks, mopeds and large animals wandering around, is not in place. Driving in Vancouver must seem like a cakewalk when you compare it to driving in present-day Mumbai or Beijing.”

“Furthermore,” he went on, “in many countries, your choice of car is a strong status symbol which is a sentiment immigrants often bring to Canada. Some cultures see nothing wrong with pushing to the front of the line, with the mentality that; “My Mercedes (BMW, Lexus, Land Rover, whatever) deserves to be given the right of way! Can’t you see what I’m driving?” Many new Canadians won’t always know the rules or protocols of sharing the roads, whether it be actual laws, tacit agreements on right-of-way or simply consideration for the other road users,” he added.

As the B.C. government considers increasing fines for distracted driving, which now kills more than drunk driving, and a new poll shows that the majority of B.C. residents are anxious about senior drivers, Strelau concedes that both young and old drivers are most at-risk.

“Statistically,” he said, “drivers 15 to 19 years of age represent 5.3% of the driving public, but are involved in 14% of the fatal crashes. The fact that many of these young men (and women) are unsupervised and can acquire expensive and powerful vehicles only adds to the already boiling pot.”

“While drivers over 65 are statistically more at risk of a fatal collision,” he added, “representing 10.3% of the driving public, but involved in 14% of the fatal crashes, if they drove as freely as the younger age group their driving record would actually be dramatically worse.”

“This is not a conspiracy against the young or the old,” he said, “it’s simply a matter of getting truly incompetent drivers off the road and providing them with safe alternatives.”

“As far as Vancouverites being the worst drivers, I have a theory which I think is pretty air-tight,” he concluded. “As a cultural melting pot, Vancouver is host to huge numbers of people from all different backgrounds. If you’ve ever been to, say, Rome, you know that driving is a world apart to, say, Japan. Now, imagine taking a handful of drivers out of each location and putting them on one road. It would result in chaos, which is Vancouver!”

“As a country, we’ve got aggressive drivers, assertive drivers, slow drivers, meek drivers, drivers who stop and turn on a dime without signaling (cough, cough, Albertans!) As I said, it’s not that we’re bad drivers or people – we’re just a huge population of incommensurable drivers.”