A damning report out of SFU is blaming Vancouver’s real estate crisis on the provincial and federal government’s failure to stop foreign money flowing into the city’s housing market.

In his report, Josh Gordon of the School of Public Policy says he wanted to help people reject the reasons for inaction offered by the government and real estate-related industries.

Gordon claims the provincial government in particular has become hooked on the tax
revenues and short-term economic growth that the housing bubble has generated.

“The real estate sector (i.e., construction and real estate services) now constitutes a quarter of the province’s GDP,” he writes. “In a crass political strategy for re-election in 2017, the provincial government has apparently thrown caution to the wind and is trying to ride the bubble just long enough that they do not pay a heavy political price for getting the city into this mess.” 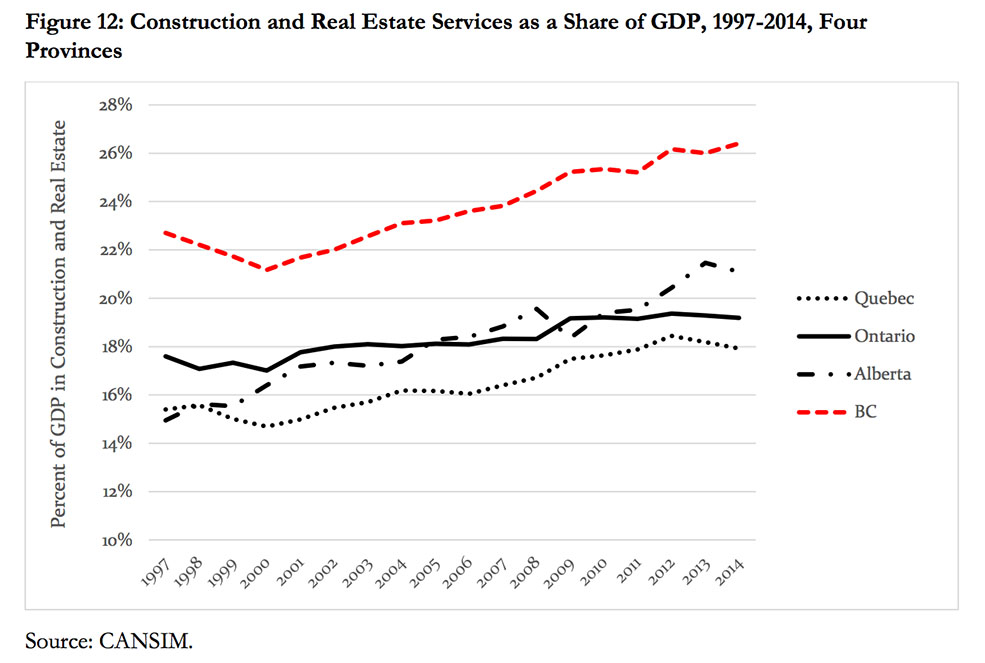 Construction and Real Estate Services as a Share of GDP, 1997-2014, Four Provinces, according to CANSIM (SFU)

Gordon certainly doesn’t mince words in the report, and says he tried to write it in an accessible and engaging way – purposefully dropping the usual academic tone.

Not shying away from the issue of foreign ownership, he researched a range of different factors typically used to explain the housing crisis.

Perhaps unsurprisingly, he found a large flow of foreign money into the region, that he says has reached unprecedented levels in the past year, accounts for most of the crisis.

Meanwhile, other factors included low interest rates, allowing locals to stretch their mortgages to compete, and geographic constraints, limiting the number of homes that can be built.

But he found other alleged causes, like a “strong local economy, Vancouver’s desirability, strict zoning/regulations and low social housing investment” had only a tiny influence.

The federal government has already allocated $500,000 for StatsCan to look into measuring foreign real estate ownership in Canada. Elsewhere the City of Vancouver recently launched an online survey to gauge residents’ views on empty homes and the best way to improve affordability in the city.

Mayor Gregor Robertson has also informally proposed taxes to try to curb the city’s unaffordable housing market. Meanwhile, the province has asked BC Housing to gather numbers on foreign ownership, in order to understand housing affordability. That report is due in the summer.

But Gordon urges the government to do more and suggests the most effective solution would be to introduce a progressive property surtax deductible against income tax paid. This, he says, would solve most of the problem and would place a surtax on foreign or non-resident owners without Canadian income.