Young British Columbians need to save for 23 years in order to scrape together enough money for a downpayment to buy a family home, according to a new report on Vancouver real estate.

The report, titled Code Red: Rethinking Canadian Housing Policy, was published Wednesday by Generation Squeeze, a lobby group for young Canadians. It looks at the change in average home prices and earnings across Canada – including Metro Vancouver – ahead of a campaign aiming to elicit action to “ease the housing squeeze.”

“It used to take five years for a typical young Canadian to save a 20 per cent downpayment on an average home,” explained Dr. Paul Kershaw, the study’s first author and a UBC professor, in a release.

The study drew on a range of statistics from BC Assessment, Statistics Canada, the BC Real Estate Association and the Canada Mortgage and Housing Corporation amongst other sources.

It found that the average price of a home with three bedrooms in Metro Vancouver exceed $800,000 and are well out of reach for most younger Canadians.

The researchers went on to examine what is available for less than $500,000 – twice the cost of an average home in the region back in 1976-1980, after inflation. They found only 15% of Metro Vancouver homes cost less than half a million dollars and have at least three bedrooms. 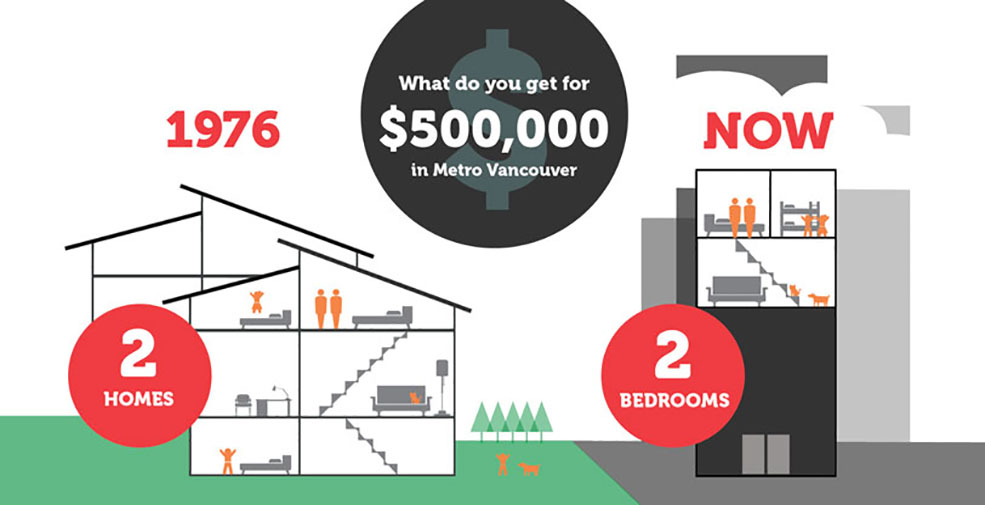 The study also makes 10 suggestions for how to solve the housing crisis in Canada: