A recent study has found Vancouver to be the fourth most expensive city in Canada when ranking the cost of monthly public transportation. Picodi, an international e-commerce platform, has published a report that compares the affordability of public transit in both Canada and across the world’s major cities.

“Despite its many advantages, some cities struggle to make mass transit fast, convenient, and affordable,” reads the study. “The price of the daily commute can convince or discourage a citizen from taking the local bus.”

Cities were ranked based on the price of an unlimited monthly ticket. The study also revealed whether the city’s public transportation was limited to buses or included subway, streetcars, or SeaBuses. With a monthly ticket price of $98, Vancouver ranked the fourth most expensive out of 12 Canadian cities.

Placing above Vancouver was Winnipeg, which offers a monthly pass of $102 but is limited to transportation by bus. Montreal, which ranked as the fifth most expensive city, was notably cheaper than Vancouver ($86.50) and includes travel by bus and subway.

Picodi says that “unsurprisingly,” the most expensive city for public transportation is Toronto, with a monthly fare price of $156. The analysis team argues that “the variety of services,” which include streetcars, buses, and subway, might explain the high price for a monthly pass. 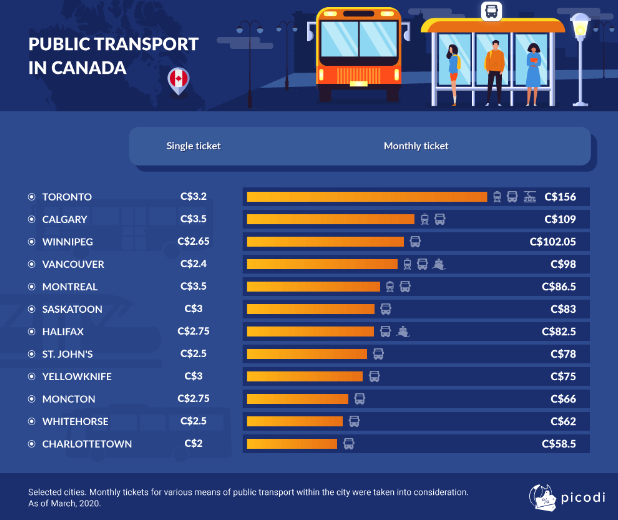 When it comes to the priciest cities around the world, the study found London ($259 US), Dublin ($213 US), and New York ($127 US) to be the most expensive. The global ranking also examined the average monthly salary in each city, then determining how much of that would go towards paying for public transportation.