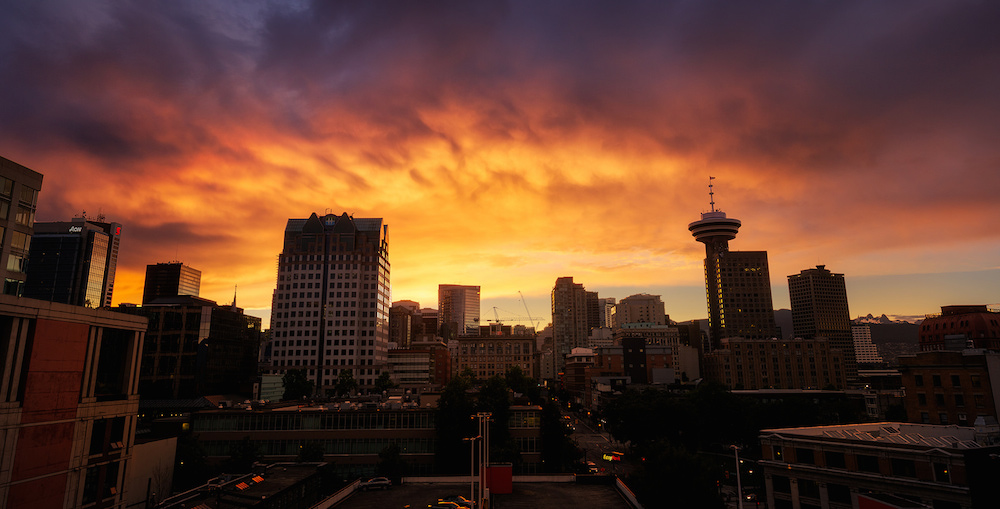 The skies over much of the Metro Vancouver region lit up with brilliant colours on Friday evening.

People took to social media this evening to post photos of a rainbow just as the sun was beginning to dip under the cloud ceiling to the west. It provided for the perfect conditions for a rainbow, and from certain vantage points there were even double rainbows.

The rainbows later gave way to a brilliantly fiery sunset of yellow, orange, red, and pink colours, which happens when light reflects and scatters off particles such as cloud droplets or air pollution. Just after sunrise or before sunset, when the angle of the sun and the horizon is less than 10%, sunlight becomes red as a result of refraction for all colours except those with a reddish hue.

Simple wins in life: double and joined by my favourite tonight

Inspirational Title: “Sometimes it’s not quite clear why people do what they do, I mean, life is a strange f**king kettle of sh*t fish” -Jim Lahey About this photo: I am absolutely devastated that I am sitting on my deck and seeing this. There was literally no clouds in the sky about 45 minutes before this which is why I decided to stay in tonight… I am gutted to only have a shot from my deck with a sky like this. Warning: Photographers sometimes use “inspirational quotes” as titles for their photographs. I’ve decided (for better or worse) to include  quotes that reflect my own ridiculous personality. You’ve been warned ;-)… if you look behind the curtain of this sarcastic, goofball you will find ridiculousness. #hashtagdouche #awesome_photographers #canadasworld #discovervancouver #explorecanada #imagesofcanada #longexposure_shots #thegreatoutdoors #vancitybuzz  #vancityvibe #viewbugfeature  #destinationearth #TheGreatOutdoors #huffpostgram #justgoshoot #VeryVancouver #artofvisuals  #CanadianCreatives #earthfocus #jaw_dropping_shots #Places_wow #superhubs #vancityfeature  #vancityhype  #tlpicks #greatnorthcollective #peoplescreatives #ig_worldphoto #mobilemag #livefolk @nature.geography @natgeo @natgeocreative

Goodnight #vancouver and thank you for the most incredible sunset

So this is Friday night and everywhere I walked there was the smell of BBQ.