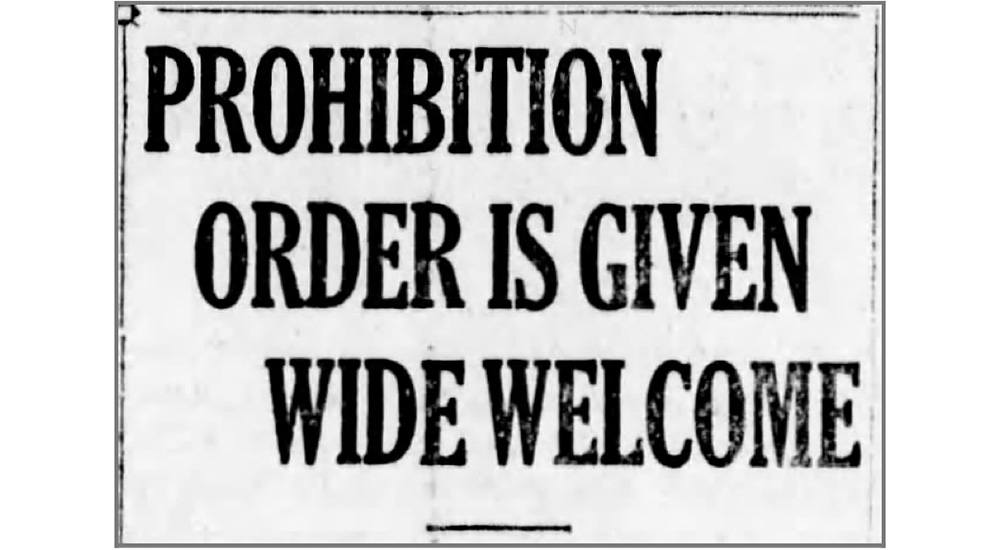 A hundred years ago in Vancouver, there were no Christmas pub crawls in ugly Christmas sweaters. There was no mulled wine, no seasonal cocktails — not even rum and eggnog.

Prohibition of alcohol was in full swing by Christmas of 1918, and Vancouver was having a very dry Christmas. It had come into effect the previous year. And here is a front page headline on Christmas Eve of 1917: 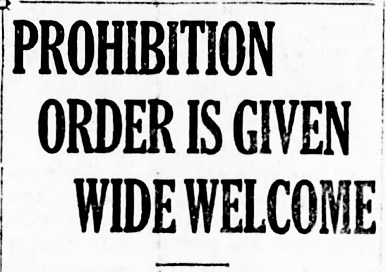 Wide welcome? Here is an explanation, from that same Christmas Eve issue of the Vancouver Daily World:

“Production of liquor is not a war-essential but a war-waste, and a heavy one at that…”

The many evils of alcohol had been denounced for years by staunch Prohibitionists. But it was wartime necessity that had finally persuaded most people. By Christmas Eve of 1917, a national ban on the importation of alcohol was being celebrated by the headline above. Positive messages about Prohibition were all over the Christmas headlines. It was good for the war effort, good for the moral fibre of the nation — it was even good for the economy! 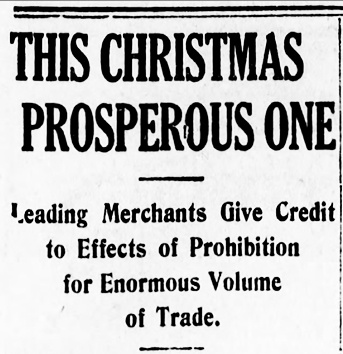 It took less than a year for opinions to change. By the Christmas of 1918, Prohibition was in the news again — and the headlines had a decidedly different tone.

Here’s one from December 27th: 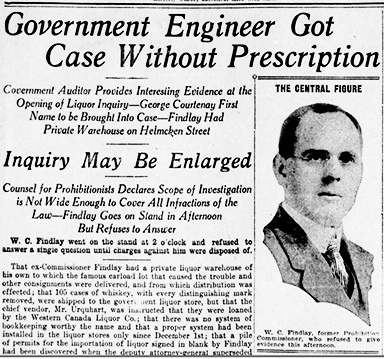 Walter Findlay was less than a year into his role as the province’s Prohibition Commissioner, and he was already on trial for corruption. This was a major embarrassment. He had been well-respected in the temperance movement, and had even been the president of the People’s Prohibition Association.

Among his crimes was the case of the missing whisky (105 cases, actually). Five train cars full of whisky arrived here in Vancouver, their contents disappearing while in Findlay’s care. On trial, he refused to disclose the whisky’s whereabouts — or say anything at all. There was a distinct lack of record-keeping in place, but the documentation that existed said the missing whisky was supposedly en route to a town called “Pureto.” I’ll let this smart-ass journalist tell you where that is:

He goes on to explain that the whisky was: “consigned to that doubtless salubrious and most certainly thirsty southern city, where the mirage blooms on the plain and the hombre sleeps on the shady side of the adobe hacienda.”

Findlay was not the only stalwart Prohibitionist to succumb to financial temptation. Vancouver’s future mayor, William Harold Malkin, also profited from prohibition. 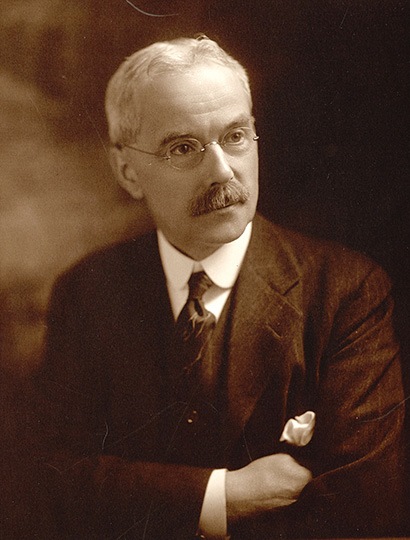 Malkin was said to be making great money at his Water Street grocery store, thanks to a sudden demand for flavouring extracts. While they contained less than 2.5% alcohol (the legal limit during Prohibition), that was apparently enough for some to get an effect known as “jazzy jag.” 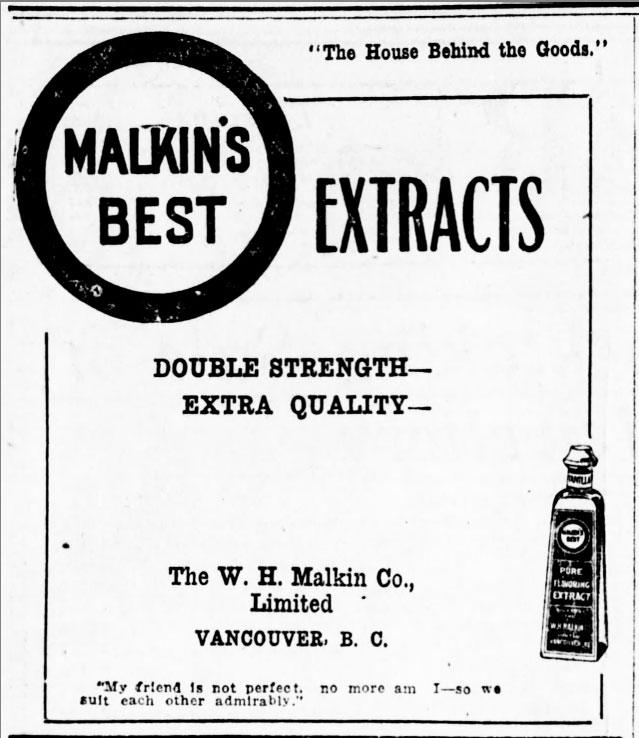 In the meantime, breweries had kept themselves in business by manufacturing “near-beer,” with only 2% alcohol content. Below the legal limit, near-beer could be sold anywhere soft drinks were sold.

There were few regulations around the sale of near-beer, and it thus had a way of becoming nearer and nearer to real beer. Brews that were well over the limit could often be found at hotel bars, although of course hotel-keepers claimed to be ignorant of the high alcohol content. 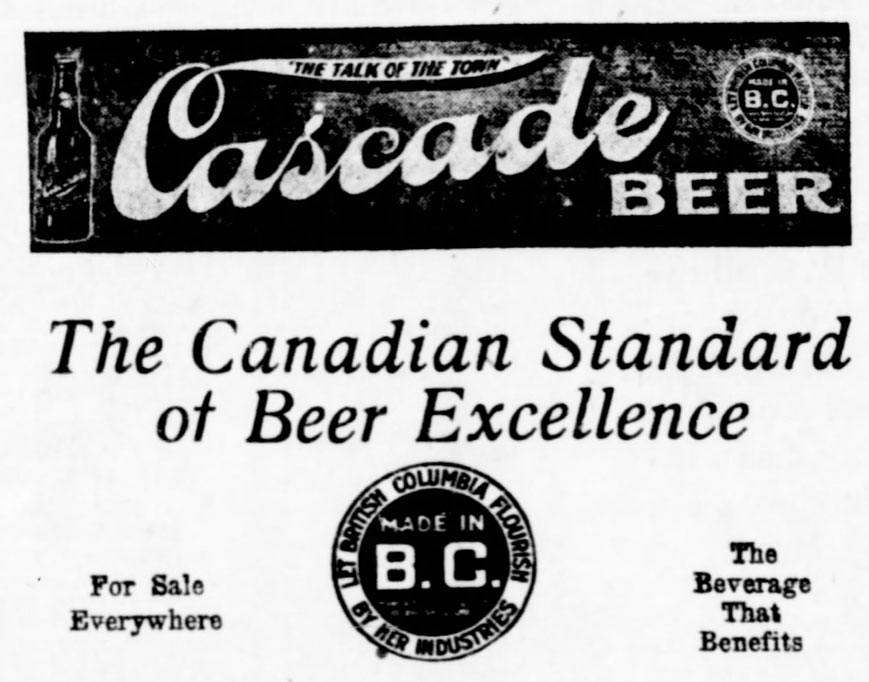 That same Christmas season, the epidemic of Spanish Flu was accompanied by an outbreak of medicinal prescriptions for alcohol. One of the most effective cure-alls known at the time, alcohol could be prescribed for any number of ailments (Perhaps you can think of a modern-day comparison).

Doctors charged as much as $5 per prescription. One doctor in Vancouver wrote 4,100 in a single month! The incessant writing of prescriptions often led to writer’s cramp. And in order to soothe it, according to the secretary for the Provincial Premier, “…several doctors needed a little alcoholic liniment…”

By Christmas of 1918, Prohibition had led to all kinds of corruption and abuse. And for most people, its usefulness had already expired. The Great War had just come to an end in November. The need for wartime sacrifice was over. Now it was time to celebrate! Returning soldiers felt the same. Most of them had not been in favour of Prohibition to begin with, and they were certainly not happy to return home to it.

Between the grumblings of returning soldiers, the abuses of extracts and near-beer, and the high-profile scandals, most citizens were done with Prohibition by the Christmas of 1918. Yet Prohibition was not done with them. It remained the law in B.C. until June of 1921. By Christmas of that year, we were doing our best to put it behind us. Or as this headline puts it: 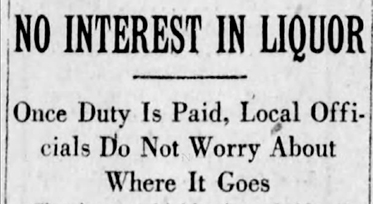 U.S. Prohibition was just starting by the time it had already failed here. Canadian rum runners were soon making their way down the Pacific Coast from Vancouver to supply thirsty Americans with smuggled booze. To dissuade them, American Prohibition officials had begun a rumour. They announced the Canadian Government had purchased two high-powered submarine chasers in order to catch smugglers. It caused quite a few laughs here in Vancouver. 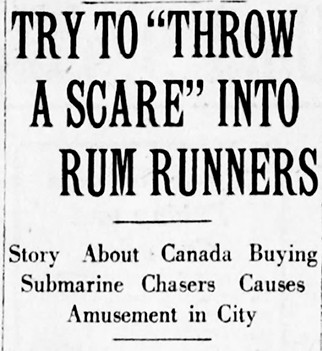 One Customs official said that while they were happy to assist our southern neighbours wherever possible, “…we are not interested in the liquor once the duty is paid on it.” Evidently, we’d had enough of Prohibition here in Canada.

As you enjoy your favourite holiday drink this season (perhaps while puffing on your legal marijuana) take a moment to remember the dry Christmas of 100 years ago.

To learn more about the vice, crime, scandal, and booze during Prohibition in Vancouver, take the Forbidden Tour. And check out Forbidden Vancouver’s other walking tours.