Attention PiDGiN restaurant protesters, you’ve been put on notice. The Vancouver Police Department have given the group of anti-gentrification protesters a final warning on their illegal activities. Any further harassment of the restaurant’s staff and patrons by the protesters may result in arrest.

This comes after nearly two months of daily non-stop “protesting” outside the restaurant’s doors since it first opened, going as far as heckling customers as they enter and exit and even shining lights through the windows and taking pictures of patrons. Despite all this, PiDGiN operators have stated they will not be intimidated into submission and will even implement donation and food programs for Downtown Eastside residents.

In recent weeks, there have also been several other cases of anti-gentrification vandalism and harassment on new restaurant businesses. This has included antics on Famoso Pizzeria on Commercial Drive and Save On Meats.

The misguided PiDGiN protesters claim the new restaurant in “their” neighbourhood is “upscale,” although having to pay for something might very well be equivalent to “upscale” for them. Take a look at PiDGiN’s menu to see for yourself. Bullying a new tax-paying, small business that employs local residents is simply not part of the “solution,” and it’s a real shame arrests didn’t start weeks ago when these deplorable acts first began.

Gentrification? The Downtown Eastside is in very much need of and deserves renewal: cities are always in the process of change and evolution, and it’s quite clear the policies and millions spent on the Downtown Eastside every year are simply not working and are making the situation much more worst by further ghettoizing the area. Some will claim otherwise, that the neighbourhood’s residents have nowhere else to go, but the other hard truth is that a negative environment will always breed even more negativity. More of the same isn’t the answer: something must change in our approach to the Downtown Eastside.

If you’re ever in the area, be sure to check out the food at PiDGiN. They are located at 350 Carrall Street. 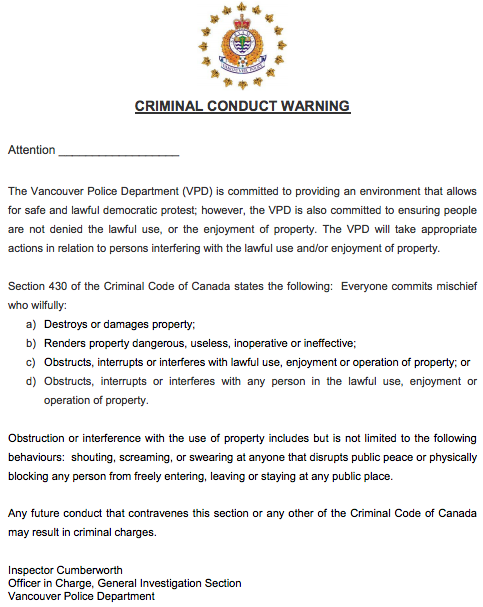