Two men have been arrested by Vancouver Police for allegedly stealing small dinghies and other boats from local marinas and docks and then using the vessels to commit a multitude of marine-based thefts.

According to police, the men used the small boats to steal property from larger vessels anchored in False Creek, English Bay, and Howe Sound as well as remote waterside residential properties on Boyer, Passage, and Bowen islands.

“The Vancouver Police had been investigating a rash of marine-related crimes dating back to July,” said VPD Marine Unit Constable Janet Stringer. “It became apparent that there were also a number of similar and possible related incidents in several outlying marine communities.”

A multi-agency effort with West Vancouver Police and RCMP detachments in Bowen Island, North Vancouver, and Squamish led to the execution of a search warrant on December 1 at Downtown Eastside’s West Hotel. Investigators found $200,000 worth of goods, including boats, machinery and tools, liquor and food, electronics, marine-related clothing, and navigational and safety gear.

During the search, 35-year-old Jeremy Edward Donald Walker and 39-year-old Liam Eric Fell. Both men have been charged for a number of offences such as possession of prohibited firearms, stolen goods, and break-and-enter.

Most of the stolen property found at the West Hotel has since been returned to the rightful owners, but a number of items remain in the possession of police. Anyone who recognizes the stolen items in the photos below is asked to contact the VPD Marine Unit at 604-717-2791.

Earlier in 2015, the West Hotel was the site of a double stabbing that left two men dead. 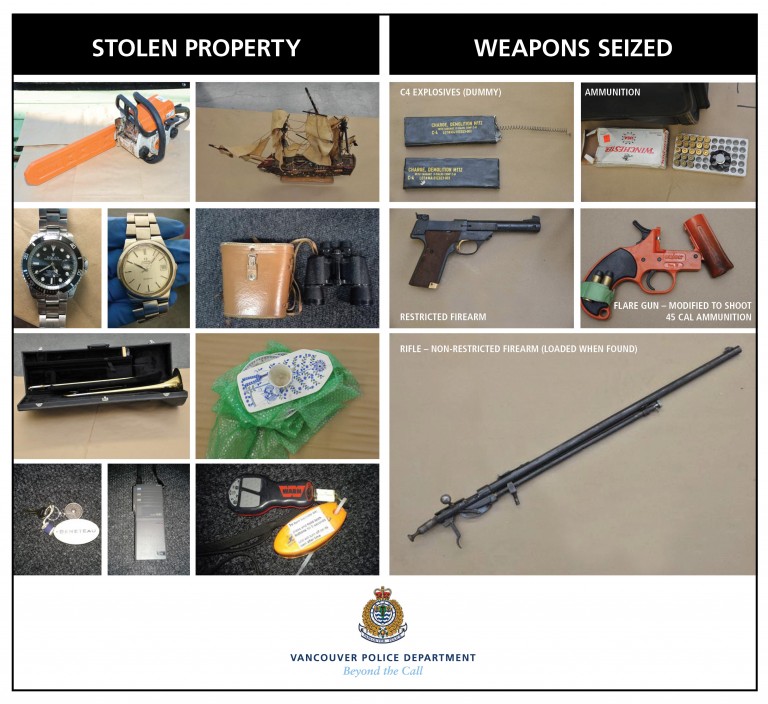