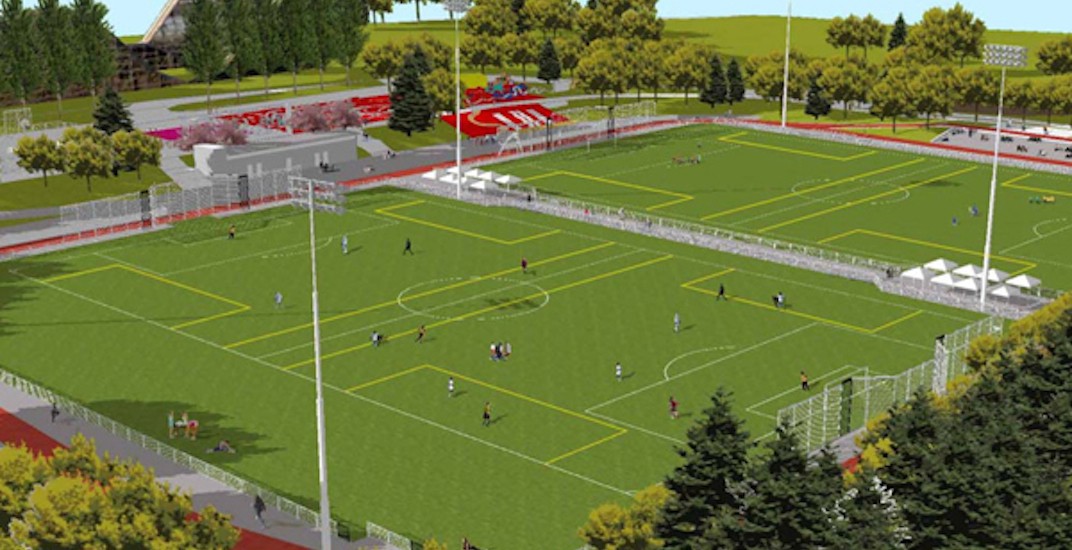 Artistic rendering of the upgrades at Empire Fields at Hastings Park completed in 2014. (Sport Hosting Vancouver)

Other than the use of BC Place Stadium for the big matches, few details have been made public about what Vancouver’s role as a host city of the 2026 FIFA World Cup could look like.

But a new proposal being considered by the Vancouver Park Board on Monday identifies four soccer fields in the city for possible team training facilities.

The proposed soccer fields are located across the city and all have turf surfaces: Memorial South Park near John Oliver Secondary School, Trillium Park at the False Creek Flats, Empire Fields at Hastings Park, and Jericho Field in West Point Grey.

Two fields will likely be chosen for use as a practice facility.

These fields will be closed to the public – with fencing and security provided – for a duration lasting 14 days before the start of the tournament until the last match is played, for potentially up to 45 days.

During the 2015 FIFA Women’s World Cup, Trillium Park and Empire Fields were used as practice facilities.

Another component for a host city is a large, open location for the FIFA World Cup Fan Fest, which could fall into the purview of the Park Board.

During the 2015 women’s tournament, the parking lot at Larwill Park in downtown was used as the Fan Fest, but the site could be developed with the new home of the Vancouver Art Gallery by the time the tournament is held. Larwill Park is also too small, as the Fan Fest for the men’s tournament typically needs capacity for tens of thousands of people to watch the matches on a big screen, plus space for pavilions, activities, and staging.

FIFA policy stipulates the Fan Zone must be located within very close proximity to the host city’s stadium.

FIFA will decide on the winning bid on June 13, 2018, and the official host cities will be announced by the future organizing committee in 2021.