The Vancouver Opera‘s Don Carlo delivers on its promise to render Giuseppe Verdi’s creation as “spectacular on a grand scale,” thanks to towering performances from its star singers.

This co-production between VO, Hawaii Opera Theatre and Opera Hong Kong plays it safe, interpreting Verdi’s opera (itself adapted from a play by Friedrich Schiller) with lush, but typical period costumes and straightforward set design. There’s nothing new here, but after a 40 year absence from its stage, the VO doesn’t need to reinvent Don Carlo, especially with its riveting cast of artists buoying a flawed libretto.

In Don Carlo, the title character, a sort of impotent Hamlet-like reactionary, resents the peacemaking marriage of his father King Phillip II to Elisabeth de Valois, who was once promised to Carlo. Elisabeth secretly lusts after Carlo too, and her wandering eye is perceived by the king, who has enough on his plate while he wages war in the region of Flanders. Carlo flees to Flanders and takes up arms against his father to defend the people there. Phillip arrests both Elisabeth and Carlo, involving Spain’s Grand Inquisitor in their judgment. In the final scene, conflict breaks out and the king murders Elisabeth while Carlo is spirited away by the ghost of his grandfather. 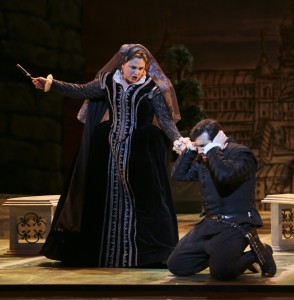 As Philip II, bass Peter Volpe commands effortless kingly authority, yet produces tender vulnerability in the scene where he laments his wife’s treachery. The exceptional Gregory Frank’s hobbling, blind Grand Inquisitor is truly threatening and sung with a deep resonance that almost sounds as if it’s always ringing through the halls of a dour monastery. As Elisabeth, soprano Joni Henson reaches dizzying vocal heights with clarity and aplomb. Carlo is sung in a versatile, emotive tenor by Andrea Carè in his VO debut.

Mezzo soprano Mary Phillips, as Princess Eboli, a courtier in love with and rejected by Carlo, deserves special mention for particularly deft acting. 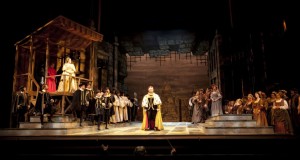 The narrative of Don Carlo as theatre is less than engrossing, and the staging of the final scene in this production is awkward; if you’re watching any one of the other powerful actors on stage acting out their dramatic final moments, you can easily miss Carlo’s significant exit and be left scratching your head after the rather abrupt curtain.

The artists are what propels Don Carlo – thanks in no small part to the talents of musical director Jonathan Darlington, who skilfully guides the mostly capable orchestra through Verdi’s challenging score.