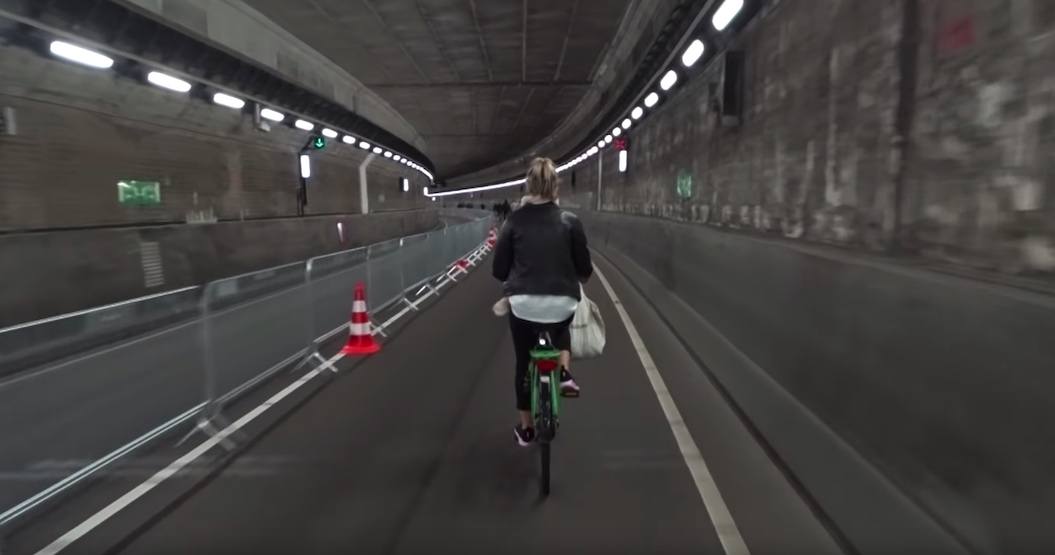 Could a rapid transit tunnel under Burrard Inlet between Vancouver and the North Shore include a path for cyclists?

This idea by City of Vancouver transportation planning manager Dale Bracewell has been making the rounds on social media this week, after he tweeted the idea and included a video of the IJtunnel in Amsterdam being temporarily used by cyclists.

Dare to dream with me – what if a new #NorthShore rapid transit link included the opportunity to have a direct cycling connection to #Vancouver?

While I love my waterfront views from Lion’s Gate Bridge, I welcome this for our rainy days. #Transport2050

According to Cycling Weekly, the 1.6-km-long, car-only tunnel was turned into a cycling highway for bikes earlier this week due to a nationwide public transit workers strike. To maintain timely and efficient access to the city, transportation officials decided to close the route to cars and turn it into a route exclusively for bikes and emergency vehicles.

Of course, there are a myriad of considerations for such a North Shore cycling tunnel idea, including technical feasibility, public safety (the tunnel to the North Shore would most likely be quite long), and the added cost.

The stacked four-lane tunnel that will replace the Alaskan Way Viaduct. It includes emergency refuge space and a maintenance level beneath the roadway decks. (Washington State Department of Transportation)

The provincial government recently launched a major technical feasibility study to determine the possibility of building a new rapid transit connection between Vancouver and the North Shore, including the exploration of the option of a SkyTrain extension.

TransLink is also currently in the process of creating its Transport 2050 regional transportation strategy, which is expected to outline serious long-term transportation improvements for the North Shore.

This is not the first time an active transportation (walking- and cycling-only) connection has been pondered for the North Shore. In fact, there was an official agreement between the provincial government, City of Vancouver, Vancouver Park Board, and TransLink to shut down the Lions Gate Bridge and Stanley Park Causeway to all car traffic by 2030, but only if a new replacement road crossing were constructed.

According to the terms of the agreement, without any car traffic, the bridge and causeway would be converted to either an exclusive route for cyclists, pedestrians, public transit, and/or an extension of Stanley Park’s green space.

The agreement was made in 2000 when the Lions Gate Bridge was undergoing a major deck replacement, and an option of widening the bridge and causeway from three lanes to four lanes was being considered. However, the agreement was cancelled in 2015 by the provincial and municipal governments — not that it would have mattered anyway, given that there are no plans to build a new roadway to the North Shore.

For a backgrounder on the possible routes and geotechnical challenges of building a new tunnelled rail rapid transit route from Vancouver to the North Shore, read Daily Hive’s previous feature story on the need for a North Shore SkyTrain extension.