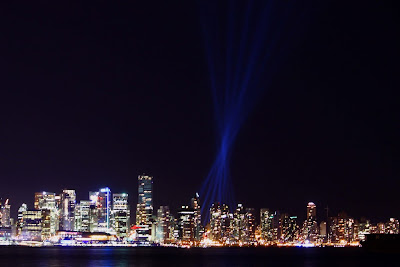 Not a bad way to start off the Olympics as timing of this announcement couldn’t be any better. We have the opening ceremony tonight and now Economist Intelligence Unit named Vancouver the most liveable city in the world, yet again. Having chatted with a few tourists who have never been here before, many have stated they now know what the fuss is all about. Our little secret is out, today is turning point in Vancouver’s history. Vancouver will not be the same and I believe the change will be for the better.

Vancouver has again topped a list of the top 10 most liveable cities in the world, giving the Canadian west coast city an extra boost as it opens the 2010 Winter Olympics.

In the annual survey by the Economist Intelligence Unit, Vancouver scored 98 percent on a combination of stability, health care, culture and environment, education, and infrastructure — a score unchanged from last year.
The city has also topped the index since at least 2007.
In the 2010 ranking, there was little change in the top positions with Vienna, Melbourne and Toronto still taking the second, third and fourth positions and the top 10 dominated by Canadian and Australian cities which took seven of the 10 slots.
Johannesburg, which is hosting the soccer World Cup finals in June, came in 92nd place, the highest score in sub-Saharan Africa.
“Vancouver scores well across all categories in the survey and the forthcoming Winter Games contribute to a strong score in the cultural and sporting events category,” said Jon Copestake, editor of the report, in a statement.
“Johannesburg has had well-documented crime problems, but performs better in other categories, with the highest overall livability rating in sub-Saharan Africa.”
The Economist Intelligence Unit survey ranked 140 cities on 30 factors such as healthcare, culture and environment, and education and personal safety, using research involving resident experts and its own analysts.
It said in a statement that these rankings were used by employers assigning hardship allowances as part of expatriate relocation packages.
New York was ranked 56th, two slots behind London which was at number 54, while Los Angeles ranked at number 47.
Zimbabwe’s capital Harare scored the least, making it the list’s worst city, with a rating of 37.5.
Following is a list of the top 3 most liveable cities as ranked by The Economist: