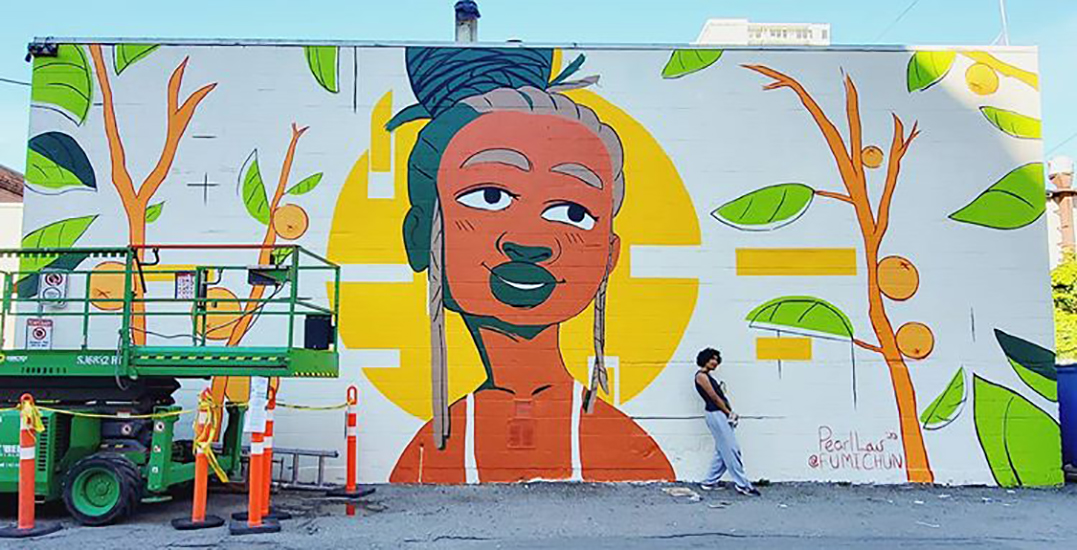 And for festival organizers, alongside many Black artists, curators, and creators, it’s a conversation that needs to be had.

VMF says that since its first year, it’s made the engagement and inclusion of Indigenous and POC artists and curators a “key priority.” And yet, they recognize that they, alongside other organizations, have fallen short when creating opportunities for Black artists in public spaces.

That’s why they’re hosting an Artist Talk on Tuesday evening. Through discussion with curators and artists, they hope to understand how they came to this point, what sort of barriers exist, and how muralism can combat anti-Black racism in public spaces.

Not to mention, do conversations around tokenism intersect this work? And what would celebration and growth look like for Black artists and curators look like in Vancouver?

This year, VMF has also put more focus on supporting Black artist representation both at the festival and on city streets. Here’s a quick look at murals that are being created during this year’s festival by Black artists:

Pearl Low is an Academy Award-winning, Queer Afro-Asian artist based in Vancouver. She works in comics and animation and won an Oscar in 2020 for her work on the short film Hair Love.

Her piece, Precious Fruit, depicts a Black woman exuding joy in front of a deconstructed sun, surrounded by oranges on branches.

“Oranges have many meanings, but the ones that resonate with me are joy, happiness and prosperity,” says Low. “Through my lens, I hope to showcase a form of Black joy that is beautiful to me, and how even in a world that doesn’t support us, we still bloom and grow, like precious fruit.

Precious Fruit can be found at the south back wall of the Junction on 1138 Davie Street.

Hope Through Ashes: A Requiem for Hogan’s Alley by Anthony Joseph.

Anthony Joseph grew up in Montreal, Quebec, where he developed an early passion for creating vivid visuals. His passion and love for art continued throughout high school and his post-secondary studies and he graduated from the Emily Carr University of Art + Design with a major in Animation.

In 2014, he launched ADO Works, an art studio through which he creates mixed media paintings and illustrations.

Joseph says that his piece, which will be painted on the Georgia Viaduct, adds art to the very instrument that destroyed Vancouver’s first concentrated Black community.

“This reflection serves as a somber tone, placing the painting within smoke from the neighbourhood’s demolition,” he says.

Joseph will begin painting his mural, Hope Through Ashes, later this week. It will be located on the north-facing facade of the Western on-ramp to the Georgia Viaduct.

Ejiwa “Edge” Ebenebe is a Nigerian-Canadian artist based out of British Columbia. As an immigrant, she wrestles with concepts of community and identity, both within herself and her work, and strives to create representation for voices (particularly Black and/or LGBTQ+
women) who are often pushed out of positive, empowering narratives.

Ebenebe’s piece, Flower Crown, is a celebration of “Black tranquility, happiness, and presence.”

“Articulating the ‘why’ of my work is something I’ve always struggled with because the force that drives me to create the work I do feels so amorphous, abstract and emotional that pulling it into a concrete, cohesive shape is overwhelming,” she explains.

“However, as more time passes, and as I’ve attempted to chip away at this barrier, I keep circling back to one core feeling: the desire to just ‘Be’.”

Flower Crown begins painting this week and will be located at 1168 Robson Street.

Tafui’s piece, Diaspora Diary, is inspired by the “idea that ‘we are one’ and through the understanding of histories and shared experiences” that bring people together.

“Using mark-making as an homage to old methods of storytelling, I share my story by connecting myself with others and others to me,” she explains. “Each symbol represents a person from an aerial view, from a distance we are all the same.”

Diaspora Diary has begun painting and will be located at 3101 Granville Street.

VMF Artist Talk: Celebrating Black Resurgence will take place on Tuesday, August 25 from 7 to 9 pm. Registration is free of charge and can be done online.