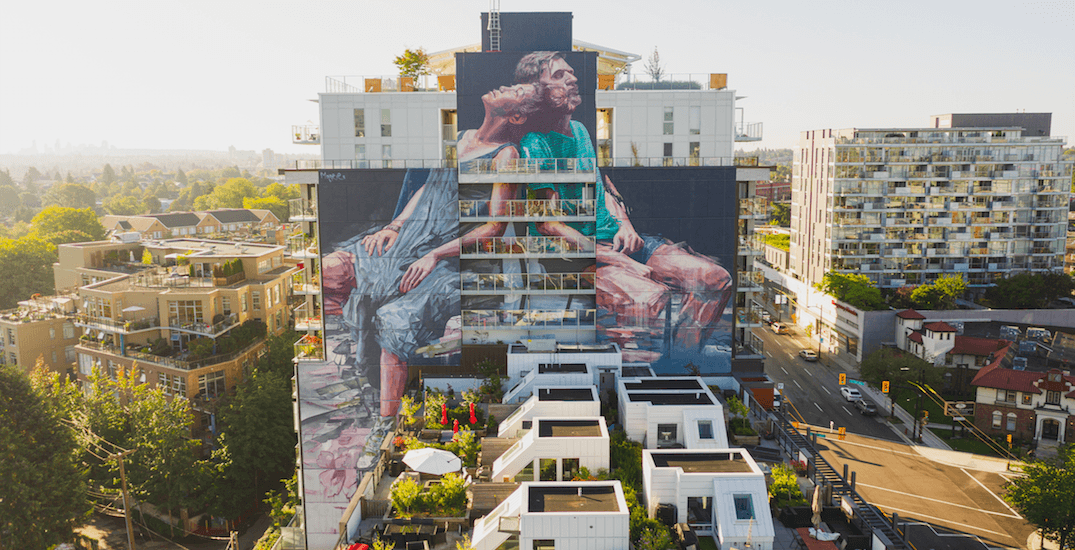 You don’t have to be a talented artist to help Vancouver Mural Festival organizers brighten up the city next year.

The non-profit group behind the free public arts festival, Create Vancouver Society, said it’s already planning 2020’s event with the goal to make its fifth year even bigger — and is asking for your help for the first time to bring that big vision to life.

The festival’s Director of Engagement, Adrian Sinclair, told Daily Hive Vancouver in a phone interview that thanks to funders, grants, and sponsorships, costs have been covered to make the event happen for the past four years, but organizers need help with raising an extra $20,000 in production costs for next summer to make the festival larger.

Sinclair said while he can’t give away all the surprises in the works for 2020, organizers want to add more roving artists, performances, live art, activations, markets, and an expanded family zone. 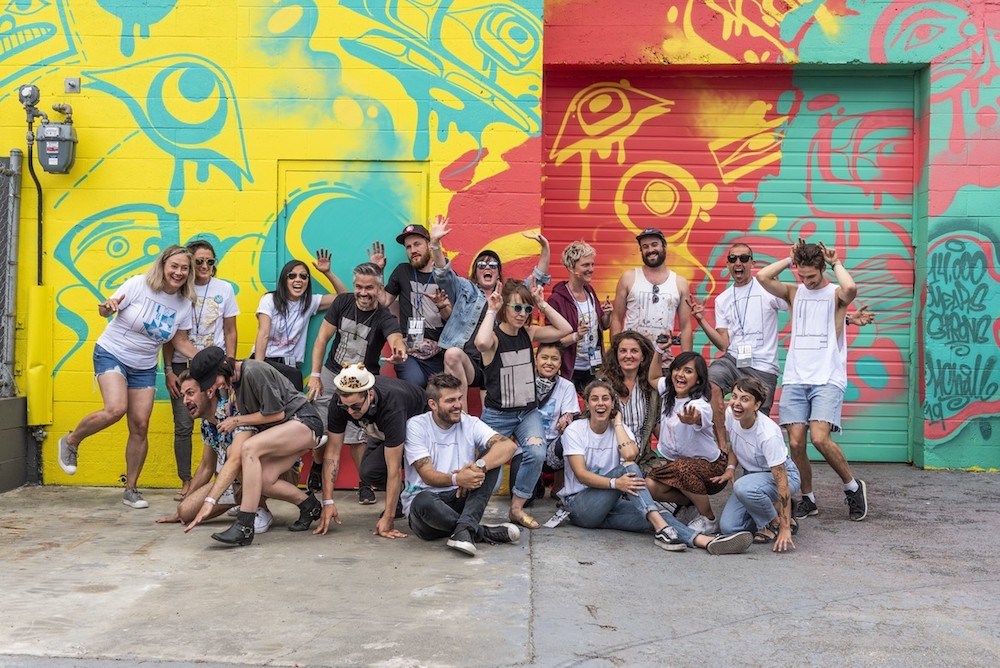 The Vancouver Mural Festival Fundrazr launched last week and Sinclair said all donations are going towards painting murals in the city, including covering costs for equipment, supplies, and artist fees.

So people get a clear picture of how their contributions are helping mural production, Sinclair said the Fundrazr “shows where your money goes” online with donation options ranging from the cost of a brush to a day of costs on a wall. 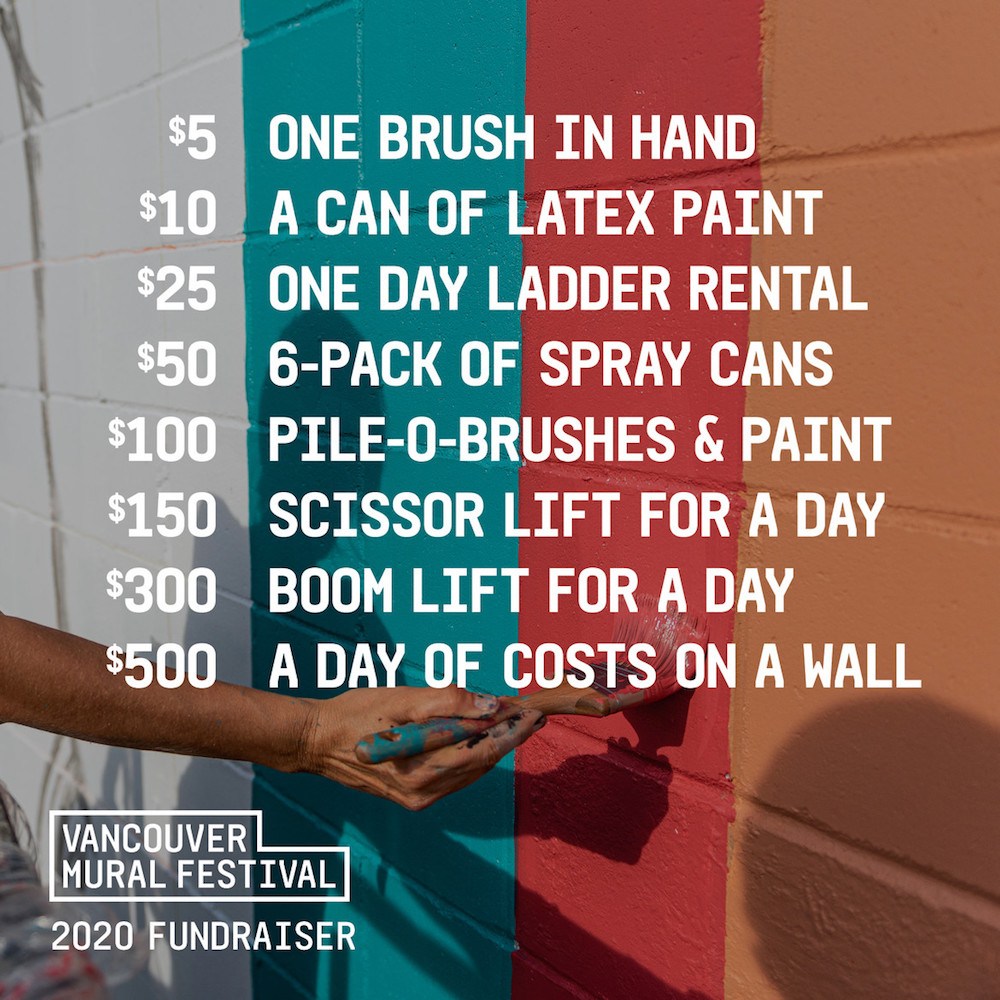 Perks are also being offered in the six-week campaign, including coffee and a cookie at Kafkas, a gift card to Rumpus Room, Bailey Nelson Sunglasses and Urban Juve lip balm, Herschel backpack discounts, and Vancouver Canucks tickets.

Sinclair said organizers take pride in paying the mural artists, which he said isn’t too common at other festivals.

“You get a lot of exposure as an artist with your mural, so a lot of times people will just do it for the exposure, but we pay all our artists at market rate,” he said, adding, “For us it’s very important to build sustainability for artists that live in the city so that they can value their work and continue to live here and to do amazing work.”

In terms of community impact, Sinclair said festival organizers also support artists with training and resources so they can keep the lineup local and diverse, “we’re really focussed on getting representation from people from different backgrounds, faiths, ethnicities, and especially Indigenous artists.” 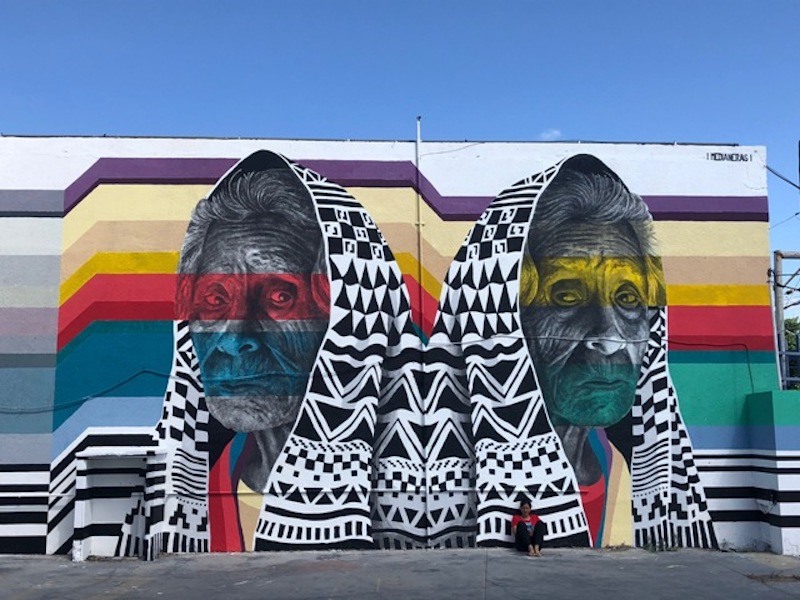 Sinclair said he thanks Vancouver Mural Festival supporters in the city, and adds organizers are thankful that the event has become something “hundreds of thousands of people enjoy and get to enjoy year round.”