Between the Submission Grappling Tournaments, show floor demonstrations, exhibitors with MMA apparel, gear and nutrition, the MMA Referee and Judging Clinic, accredited conditioning seminars by Fitness Kickboxing Canada, the MMA Expo Hotties and the growing list of MMA Celebrities, it would appear that MMA Expo founder and president, Gerald Chopik is bang-on when he says “BC’s MMA fans are in for one action-packed MMA weekend!” We at Vancity Buzz what you to go as we are giving away 4 sets of  4 tickets to Vancouver MMA fans! So if you don’t have 3 MMA frenzied friends, find some and fast. Contest details and more event info below. 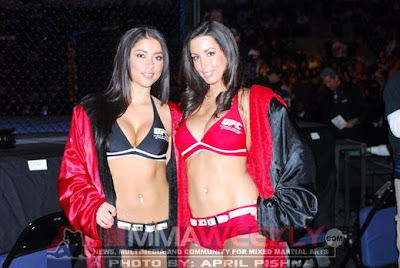 Also on the list are Thiago ‘Jambo’ Goncalves (11-3-0) from Team Nogueira as well as Vancouver resident and Seventh Degree Brazilian Jiu Jitsu Black Belt, Marcus Soares – one of the highest ranking BJJ Black Belts in Canada, one of the top in North America and a past Head Instructor at the Carlson Gracie Academy, Brazil. And apparently there are more to be announced over the next two weeks.

Female fighters are also included in the line-up as Strikeforce’s Miesha “TkDwN” Tate (8-2-0) and Liz Bader (6-3-1) will be attending.

Some of the best action on the MMA Expo show floor takes place during the submission grappling tournaments. MMA Expo seems to have just about everything for the MMA fighter and fan, including the potential for career opportunities. Seasoned MMA official, Marc Fennell will be on hand with a comprehensive two-day Referee and Judging Seminar for those who are interested in a career as an official in what many consider to be the fastest growing sport on the planet.

Contest:
We are giving away 4 sets of 4 tickets for the MMA expo. There are two ways to enter:

The contest ends March 19 at noon.