Vancouver Park Board staff have identified Queen Elizabeth Park as the preferred designated location for Vancouver’s love locks installation. According to a staff report, two site options at the park are being recommended for approval by Park Board commissioners at an upcoming meeting to be held this Wednesday.

One identified location is at a grassy knoll on the northwest corner of Little Mountain, the terminus of the zipline, while the other location is on the north facing slope where weddings are permitted.

Such an installation could also help revitalize Queen Elizabeth Park as a popular tourist attraction.

“The park is accessible by vehicle, foot, bicycle, transit or tour bus, and is often visited on special occasions for picnics, photo opportunities, strolls through the gardens and for weddings in the pavilion, as well as regular recreational use,” reads the report.

Queen Elizabeth Park is noted as the preferred option following a public consultation process conducted throughout the summer. While English Bay and Kitsilano were other popular choices amongst survey respondents, Park Board staff had reservations over the increased corrosive potential of such a seaside location as well as possible archaeological sensitivities given the area’s connection with the First Nations.

Overall, of the 2,097 survey respondents 57 per cent liked the idea of love locks, with younger adults and women recorded as the largest survey participant groups. There were 13 location choices in the survey, including a number of park sites in East Vancouver.

If the plan is approved by commissioners, the Park Board will task a local artist to design a sculpture that will be safe for love birds to affix their love locks. An installation could be ready for locking as early as next summer.

The love locks concept is believed to have originated in Paris decades ago, and they have since grown to become a phenomenon in cities around the world. However, more recently there have been safety concerns in some cities that the locks are an unsightly nuisance, and in some cases they have even jeopardized public safety.

Until this past June, Pont des Arts bridge in Paris was affixed with a million locks weighing 45 metric tonnes. Parisian officials decided the locks should be removed over safety concerns after a railing collapsed into the River Seine in 2014.

And in April, officials in New York removed approximately 450 padlocks, weighing 75 pounds, from the pedestrian walkway over the Brooklyn Bridge over safety concerns for the drivers below.

The idea of a permanent love locks site was first proposed by NPA City Councillor George Affleck in 2014, but the Vision Vancouver-dominated City Council rejected his motion for staff to explore the idea. The idea was revived with the assistance of the newly elected NPA-dominated Park Board.

Vancouver previously had an unsanctioned love locks location on the Burrard Bridge, but the padlocks were removed in 2013 when concerns arose over falling love lock debris onto boats and people in False Creek.

Last year, another cluster of love locks popped up along the False Creek seawall near the Plaza of Nations, however the locks were quickly chopped off by City crews.

Love locks have also popped up on a fence along the Fraser River at Westminster Pier Park in New Westminster. But there are no plans to remove the locks anytime soon as the locks do not pose any risk given the location. 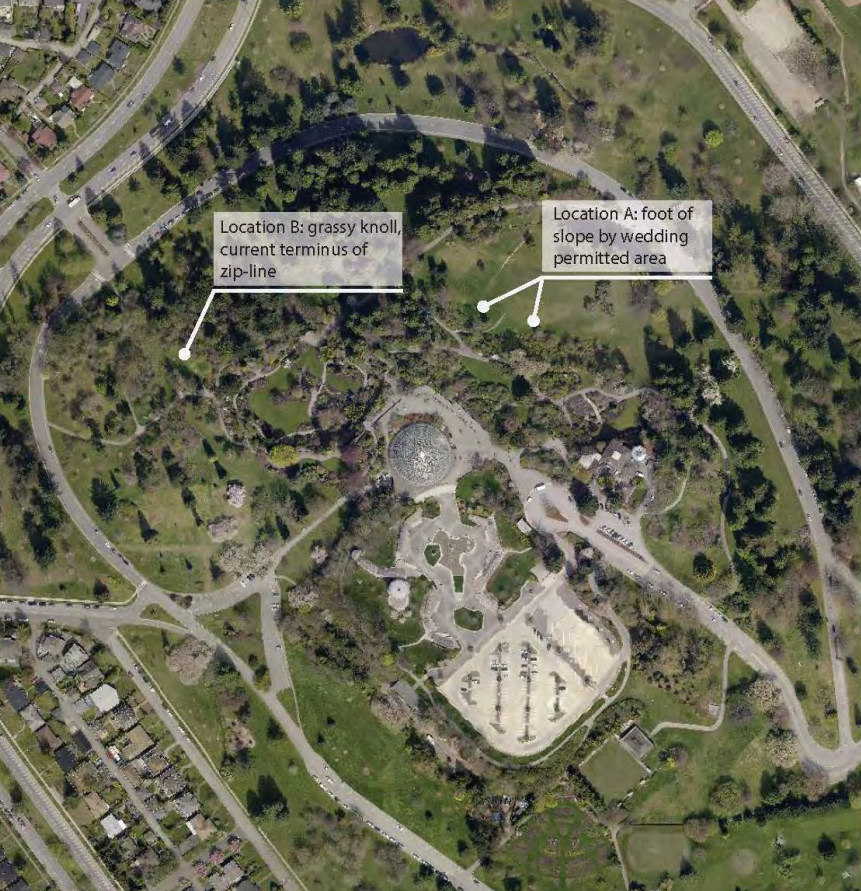