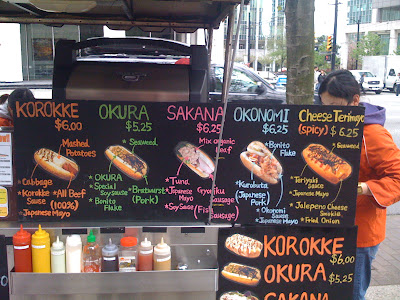 Image: InsideVancouver
Finally, the City of Vancouver has realized its street food scene is boring. Sure we got Japadog and that chestnut roasting lady on Robson. However, in reality for the most pare all we have are a bunch of hot dog vendors. So this summer (July to be more precise) a pilot project will allow mobile kitchens to joint the street food vendor scene in the already 60 designated spots around town, of which, many remain unused.
The transition seems easy on the surface as Vancouver already is home to a vibrant restaurant scene and city council is hoping that one day the same could be said about our street food.  Council want to see something similar to the burgeoning scene in Portland (a city doing many things right at the moment) and avoid the catastrophe that occurred in Toronto when they ran a similar pilot project a couple years back.
Furthermore, the city hopes that freshly prepared fare becomes a part of that scene. Whether or not that is financially viable or possible operationally remains to be seen. [source]
I know that I’m not alone in thinking this is long overdue, I say bring on the variety.!Vancouver is such an ethnically diverse city, yet, for the most part our street food cart scene is relegated to variations on the American hot-dog.
I’d like to see some samosa vendors, tacos stands, sweet and sour pork carts etc…What would you like to see in the street food scene in Vancouver? Tell me in the comments section.
VancityBuzz.com