My first landlord in Vancouver allowed dogs and cats in the building. That is until, out of the blue, he changed his mind.

Within one week, every tenant in the Kitsilano low-rise was given an ultimatum: get rid of your pet, or move out. I chose the latter, and was lucky to find another apartment. It wasn’t nearly as nice, and cost hundreds more, but still, I found somewhere my dog was welcome.

Others aren’t so lucky: about 20% of companions animals surrendered in B.C. are because of a lack of pet-friendly housing – that’s about 1,500 pets a year.

My own experience was a stressful and eye-opening lesson about pets and rental housing in this city.

Even though my landlord told me over the phone it was fine to get a pet, his permission was not in writing, and at the end of the day it was his word against mine. That verbal permission wasn’t enough to fight my case with the province’s residential tenancy branch, which oversees landlord-tenant relations.

The shortage of pet-friendly rental housing in Vancouver has become an increasing problem in recent years, especially now that the overall rental availability has shrunk to below 1%, and more units are being used for short-term Airbnb listings.

Even though we are a city of animal lovers, many pet owners say it’s nearly impossible to find suitable housing that allows one. A Vancouver family just penned an open letter to VOKRA and media outlets saying it may be forced to surrender their cat and dog because even though they can afford to live in the city, they can’t find appropriate a pet-friendly rental home.

“In Ontario a landlord has to accept your entire family – including your pets, why doesn’t British Columbia do that for us?” the frustrated renter wrote.

“We are not loud or messy or irresponsible. And yet, we can’t find anywhere to live in the city my husband and I both grew up in.”

Statistics back up the mounting anecdotal evidence: the BC SPCA says only 5% of landlords allow dogs, and 9% allow cats.

This means even though some buildings may allow dogs, they can limit it to ones weighing less than 25 pounds – which in my experience isn’t a guarantee they’re going to be better behaved. 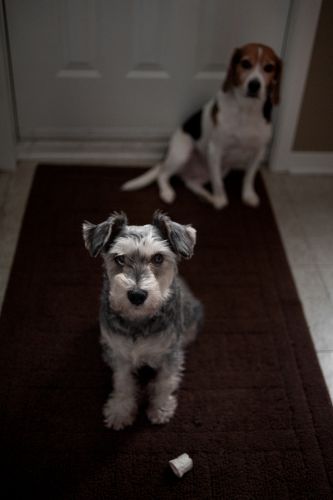 The SPCA says it understands why building owners and managers can be hesitant to allow pets – mainly the potential for damage, smells, messes, and noise – but it’s calling on landlords and stratas to at least consider allowing pets in their rental properties.

It’s not expecting landlords and owners to do all the work though: Melinda Mennie, from the agency’s stakeholder relations office, says renters that own pets need to do their part too – and be their own champion.

That means being a responsible pet guardian, and not giving landlords a reason to see pets as a negative.

Mennie says she hears from a lot of landlords who don’t necessarily have a position against having animals in their buildings, but are concerned about ending up with an irresponsible owner who doesn’t clean up after their animal, has a dog that constantly barks, or one that damages their unit, specifically the hardwood floors and carpet.

Pet owners need to think of rental applications like a job interview for your animal, according to Mennie.

“Bring the animal with you. Commit to regular grooming and brushing, so there’s less concern about scratching the hardwood and excess shedding,” she says.

You can take it a step further by creating a pet resume, she says. This can include positive references about the animal from people like your vet, or a dog walker, testifying to its good nature.

“It works really well,” she says.

“Include if your dog has completed puppy classes, any information that the property owner can use to get a sense of what the animal is like.”

You can also offer to include an additional pet damage deposit, to ease your landlord’s fears.

The BC SPCA offers a great toolkit for renters that offers tips and strategies to find pet-friendly accommodation and discuss options with current and future landlords.

And it’s important to know what your rights are, both as a renter and a property owner. The province outlines the regulations on the Residential Tenancy Act website.

Discrimination against pet-owning renters is distressing to both the people looking for housing, but also the BC SPCA, who says that renters with pets are, on the whole, much more responsible. Tenants with pets tend to stay longer: an average of 46 months, compared to 18 months for those without animals, according to a Firepaw study.

Animal owners are also willing to spend more on monthly rent, and have a vested interest in being “good” tenants, probably because they’re terrified of having to find another pet-friendly place if they had to leave.

If you’ve had an issue or success story with animals and rental housing in Vancouver, I’d love to hear from you. Email me at [email protected]. 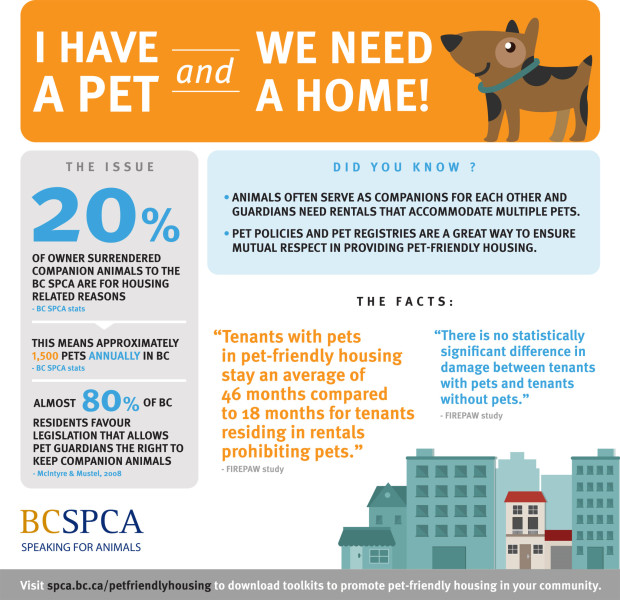