On Canada Day Weekend, June 29 to July 1, Granville Street will be taken over by some of the world’s finest street entertainers. Comedians, acrobats, musicians and daredevils from all over the world will be flown in to entertain massive crowds on the hugely popular Canada Day weekend for the Vancouver International Busker Festival.

During the 2010 Olympic Games, downtown was transformed by performers who thrilled huge international crowds with poise and skill, in what became a street performance Mega-Event. Since then, Downtown Vancouver (DVBIA) has worked closely with the street performance community here to build upon that happy chapter of city history.

Michael Anthony Bonnici, a.k.a. “DynaMike,” is a member of that community. He is an awardwinning busker who performs continuously around the world — already this year he has performed in Holland, the UK and Oman, as well as on Granville Island. Bonnici loves busking.

“In a world full of bad news and bad attitudes, busking is a breath of fresh air,” says Bonnici. “It makes people feel good in simple ways. It brings people together. It’s fun. It’s good for people.”

Bonnici founded the aMillion BaZillion Arts Society (AMBZ), which has been working hard to grow the arts in beautiful B.C. and help Vancouver shed the pejorative image of “No Fun City.”

“Busking is a beautiful and inspiring medium, and it’s totally inclusive,” says Bonnici. “Everyone has fun at a good show, and when those shows are accessible to everybody, everybody wins.” Over the past three decades, busking festivals have become part of Canada’s urban cultural landscape. And they have grown to become some of the biggest public events in the cities that host them. Toronto sees a million patrons over its festival’s four-day run. Halifax and Edmonton see half a million each over 10 days. 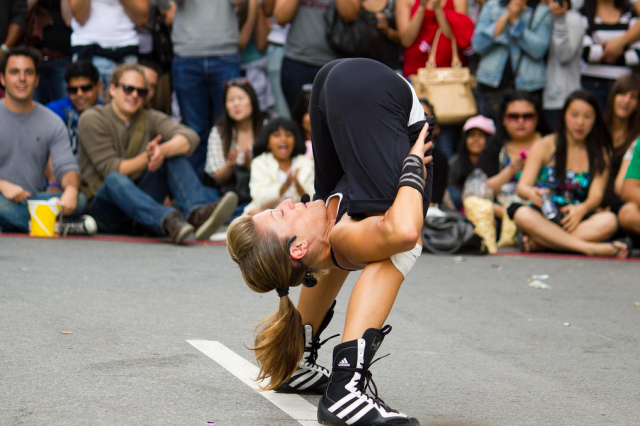 Bonnici is helped by Nick Broad, a documentarian, writer and self-proclaimed “busker groupie”. Broad is the founder of The Busking Project (TBP), an organization designed to empower and promote the global busking community. In 2011, TBP filmed street performers in 40 cities on five continents, documenting the common issues surrounding the medium worldwide.

“I’ve loved buskers my whole life,” Broad says, “from the highly-polished Covent Garden entertainers of my youth to the gritty subway performers I was surrounded by in New York City.What people don’t realize is that buskers are everywhere, all over the world, and have been since the dawn of civilization. They are as much a part of our culture as the Beatles, Blue Man Group, Barenaked Ladies, B. B. King or Justin Bieber — all of whom started out as buskers.”

In the run up to the festival, the team is seeking partners, volunteers and social media followers. To get involved or find out more, go to www.vancouverbuskerfest.com.

When: June 29 to July 1
Where: Granville Street between Smithe and Pender
Who: International acts of all varieties
Price: Free
Ages: All ages
Website: www.vancouverbuskerfest.com
What to watch for: Razor sharp machetes whizzing past your head
What to do: Tip
What not to do: Faint