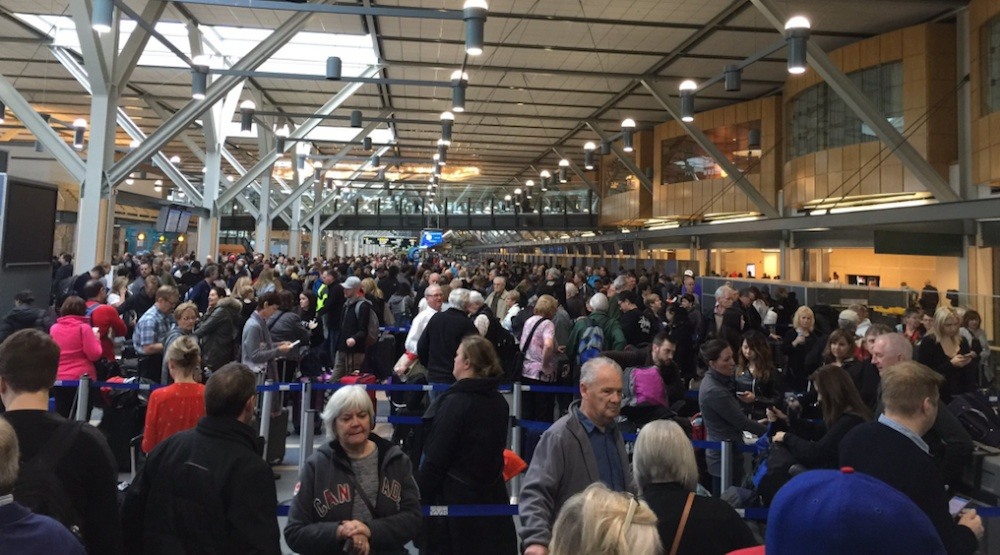 Operations are back to normal after this morning’s baggage system failure.

“Earlier this morning YVR experienced a technical issue with the Transborder baggage system, affecting all US bound passengers,” Steve Hankinson, VP of Operations and Maintenance at YVR, said in a statement. “Operations are YVR are now back to normal. We sincerely apologize for the inconvenience to our customers and airline partners.”

Thousands of travellers at Vancouver International Airport are facing long queues after an apparent failure of the terminal’s baggage drop system.

Officials with the Vancouver Airport Authority say the delays are minor, but some frustrated would-be passengers have reported on social media that they have been waiting for as long as three hours.

According to staff, the issue is impacting flights bound for the United States.

An issue w/ the baggage system has caused minor delays for US departing flights. Please check your flight status at yvr.ca.

Ever seen a baggage drop line so long? @yvrairport this is ridiculous t-minus 3 hours to drop your bag 💼 #vancouver pic.twitter.com/PEplSwxlmk

“YVR is currently experiencing a technical issue affecting the baggage system for US bound flights and we are experiencing delays for transborder flights,” a YVR spokesperson told Daily Hive.
“We appreciate your patience while we work to resolve this situation and will provide more information as it becomes available.”

Lines are even wrapping and extending to the terminal’s hallways. Those waiting in line are reportedly receiving snacks and water from airport staff.

It is unclear whether outgoing flights will be delayed due to the major delays. Issues with the baggage conveyance system began early this morning.

There is no indication of when conditions could return to normal, however, passengers are being told to check the status of their flight on their airline’s website or the flight information section on YVR’s website before coming to the airport.

YVR staff handing out cookies and water but still no closer to dropping off luggage after 90 min in line. @yvrairport pic.twitter.com/g8L076EDQK

This is the line up to put your checked bag onto the belt prior to US Customs. @yvrairport #yvrfail pic.twitter.com/VCLHCBqnTT

Baggage conveyor belt at @yvrairport is broken, huge line up to drop off your luggage. This isn’t even half the line up. pic.twitter.com/R8ZCiTMQoJ

Wow the luggage belt system at @yvrairport is broken! The line is insane to drop off a bag… place your bets if I… https://t.co/Su3XvSzpLs pic.twitter.com/S9FOHNqg8j

#LHR was quieter at Christmas than @yvrairport is today with their baggage system apparently down. Good thing I’m early! pic.twitter.com/D7VZBekyZM

@yvrairport 1 conveyer belt for all flights to the US? We’re about 200 pox in line just to drop our bags. Nice job! pic.twitter.com/T5WjlnRbkx

@yvrairport your service this morning has been deplorable. This is the lineup just to drop off bags. @WestJet have been the only ones helpin pic.twitter.com/tJzMc3UTiz

Everyone waiting to go through security at YVR. Luggage conveyor broke at 4am this morning so now EVERYONE is delayed. . . . . . #yvr #airport #yvrairport #travel #travelheadaches #lineups #clusterfuck #flightdelay